On a drive through the plains time passed by the reflective center division markers, the darkness only broken with the cycling traffic lights and blinking liquor store signs. The bullet hole-riddled sign that read “Entering Standing Rock Indian Reservation” was the only marker of crossing a border into a sovereign nation.

When the morning sky is between black and pink, Mandan’s only life stirs in Ohm’s Café. Only 45 miles of center division markers north of Standing Rock. Before returning to their fields only miles from the protest camps, farmers sit and chew on toothpicks between sips of coffee.

Many farmers had gripes with the pipeline, seeing it as a threat to their environment as well. Yet a general distaste for the “professional protesters” that have opposed the pipeline’s construction for months pervaded the cafe. The farmers wished not to be named out of fears of retaliation from protesters. One said his inbox was flooded with threats when he spoke out against the movement.

Conversations with farmers, gas station cashiers and bar tenders had a protest vernacular. “Stay safe” and recommendations to avoid the camps ended most conversations and interviews.

The daily text emergency alerts of road blockades and reports of journalists being violently evicted from the camps built an uneasy tension around the camp.

As the sun rises on the Lakota Sioux Nation of Standing Rock, trailers, the rusting carcasses of cars and dive bars appear from the omnipresent blackness of the prairie night. A landscape of golden buttes littered with signs of poverty.

Splintered by broken treaties, Standing Rock is a remnant of the Great Sioux Nation. Declared by the Fort Laramie Treaty of 1851, the Sioux confederacy was promised by the United States government sovereignty over land extending across the sacred Black Hills and much of the northern plains.

On land legally entrusted to the Sioux, indigenous people and activists from across the continent gathered to protest the pipeline they alleged would threaten Standing Rock’s water, destroy their burial grounds and disrupt the sacred sites of their ancestors.

When the decision to deny the Dakota Access company from building the pipeline came from the U.S. government on Dec. 4, a rare victory was added to the long, troubled history of the U.S. government’s relationship Native people. The current conflict continues as protesters continue to show up at Standing Rock, however. A federal court in February could reverse the current decision and allow the Dakota Access company to build the pipeline.

“There is history and his-story,” a man who identified himself as Chief David said in October while overlooking the Cannonball River from the Oceti Sakowin camp. To him and other protesters, the narrative of Native Americans has been cast away in the national consciousness for stories of cowboys, Disney movies and Halloween costumes. 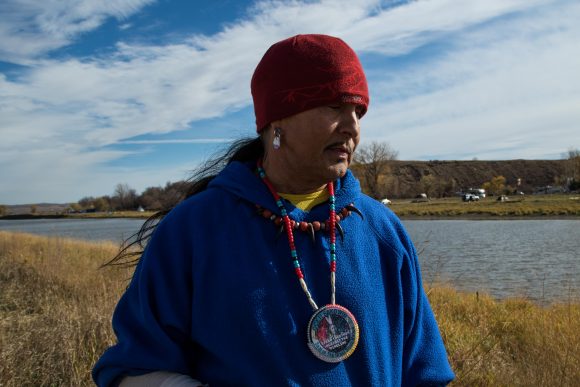 Chief David, who came from Las Vegas, Nevada, to be a part of the protests in late October, looks down over the Cannonball River on Oct. 21, 2016. (Jackson Barnett/CU Independent)

For the Lakota and Sioux people, the small town of Wounded Knee on the Pine Ridge reservation in South Dakota is less often remembered for the 1973 takeover of the small hamlet by members of the American Indian Movement, an incident often cited by worried farmers. Instead, Wound Knee carries the memories of over 150 Ogallala Sioux killed in 1890. Many of those killed women and children shot in the back as they fled Gen. George Custer’s 7th Cavalry of U.S. soldiers. Many Sioux at the camp carried the weight memories of those killed with them at the camp, according to multiple interviews.

In modern day Wounded Knee, a small town of less than 400 people, remnant scars from the atrocities of U.S. settlers still prevent opportunity for the Ogalala Sioux.

One state south of the protest camps, on one side of South Dakota Highway 44 the earth erodes into the white valleys of the Badlands. On the other, the prairie is scattered with signs of poverty. Unemployment here in the Pine Ridge reservation is closer to the employment rate of surrounding South Dakota. An estimated 70 percent of people on the reservation are jobless and poverty is more rampant than anywhere else in the U.S. as of 2010.

The massacre of Wounded Knee ended ongoing conflicts between the Sioux and the U.S. government, skirmishes that began with the quest for riches and westward expansion into Indian reservations. A hunger for gold started when Custer led troops of soldiers and miners into the sacred Black Hills in 1874. Their trespassing on native land an outright infringement of the Fort Laramie Treaty of 1851, which was renegotiated in 1868.

These broken treaties joined the list of other promises dishonored by the U.S. government, leaving cause for skepticism with the Army Corps denied the Dakota Access company the ability to build in the disputed area.

The warriors who fought in the Indian-American Wars beginning in the early 1600s were deemed by the foreign settlers as savages, beasts of inhumanity. They were not seen as the people native to the land defending their way of life against an invading force.

Their descendants are now referred to as “professional protesters” and “lazies,” as one bartender put it, criticizing the Standing Rock Sioux for the abysmal conditions of the reservation they were forced onto. 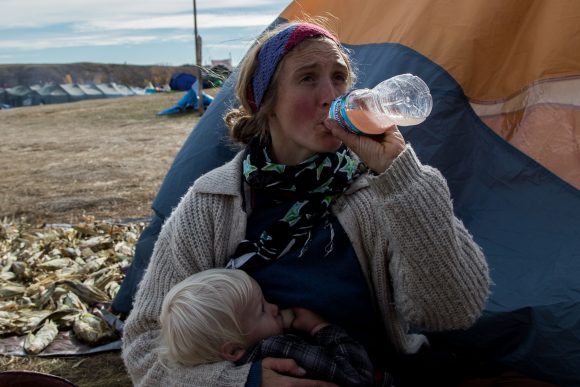 A mother breast feeds her child in the camp, calling the protest camp the “intentional community” she was looking for her family, taken on Oct. 22. (Jackson Barnett/CU Independent)

The Dakota Access Pipeline protests began as a fight for the right to clean water. For some it became the “intentional community” wandering families were searching for. And for many indigenous people, it became a new stand for the rights that they had been denied through years of poverty, oppression and historic racism.