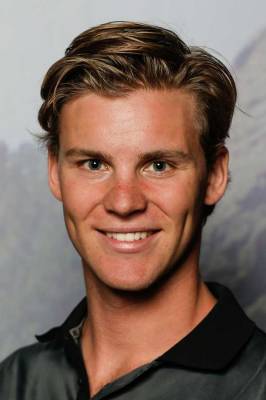 If you’re looking for University of Colorado ski team newcomer Ola Johansen, you can expect to find him where you would find any top-notch ski racer — waxing his skis for an upcoming race. Johansen is one of the CU ski team’s best finds in years. The freshman has already proven himself to be one of the best up-and-comers in the college race world after just a mere eight races.

Johansen hails from Oslo, Norway, about 4,500 miles northeast of Boulder. He began his ski career at a young age and has improved from there.

“I started skiing when I was like three years old, and then did club [racing] when I was like five or six, then just developed there from club teams to national teams,” Johansen said.

Yes, you read that correctly. The Norwegian native was named to the Norwegian National team in 2013 to race the European Cup circuit. He has joined the ranks of Norwegian Olympic champion Aksel Lund Svindal, who is currently ranked as the number one ski racer in the world.

Moving to the mountains of Colorado wasn’t a total change for Ola who had never visited the United States before uprooting and moving to the state.

“I’ve been in the airport at New York, but not in the U.S.,” Johansen said.

What drove him to Colorado?

“They have a NCAA championship team.”

The CU ski team has had 20 national titles awarded to them over the years — the most recent in 2014-15 — making Boulder a prime destination. Johansen was quick to mention that CU also has a good academic program, another important factor that went into the business major’s decision.

Living away from home hasn’t been the hardest thing for Ola, who has traveled all over Europe to race in his competitive career.

“Let’s just say I’m not living with my parents, so I have to clean my own clothes.”

Although doing his own laundry may be an issue for Johansen, competing has not been. In his first eight races in a Buffalo speed suit, Ola has been on the podium five times. Giant slalom has proven to be Johansen’s bread and butter (the next Ted Ligety?). He has acquired one first place, two second place and one third place finish in the discipline. His fifth podium was a second place finish in slalom in his debut race for CU.

Johansen is the first male racer to acquire four straight podiums to start a career or a season during head coach Richard Roko’s 26 seasons. He is also the fifth men’s alpine skier to record two top-five finishes in the first meet of the season. The last time this occurred was in 2007.

The list of accomplishments Ola has earned goes on and on, including not placing lower than sixth this season. On that occasion, he sat in 21st place after his first run and was able to improve fifteen places to move into sixth after the second run. He has also recorded the fastest single-run time for a run two separate times this season.

Johansen has handled becoming one of Boulder’s top racers well.

“It does happen pretty quick,” Johansen said. “I know that I’m a pretty good ski racer, but the college races went like really good, so I didn’t expect that in the beginning. It’s not so much different, people treat you the same.”

Ski racing is something that takes years of dedication to excel at. Even though it involves rigorous training, that doesn’t seem to faze Johansen — he considers the training fun.

He has enjoyed his time so far as a Buff and has appreciated the opportunities he has received to travel to places like Park City, Utah, Montana, and some local resorts in Colorado.

“I spent the Christmas at Beaver Creek, so that’s my favorite place so far,” Johansen said.

Johansen is looking forward to doing well the rest of the season. He is hoping to be a contributing factor in the Buffs’ attempt to win another championship.

The goal from here on out is simple: “Do well in school, do well in skiing and get some rings on my hand,” Johansen said.

He is not sure what will happen down the road when it comes to his racing career. In the world of ski racing, only the best of the best are able to make a life out of it. Depending on how his time racing at CU pans out, many doors have the ability to close or open.