Senior outside hitter Alexis Austin led the team in kills with 22 and only seven attack errors to give her a .385 hitting percentage, a team high. Sophomore right side hitter Gabby Simpson managed 16 kills in the match to add to her already 333 kills this season. Sophomore middle blocker Anna Pfefferle recorded a season high of 14 kills.

“For me to get those kills, it pumps up everyone else and the momentum keeps going, it’s all about building momentum,” Austin said after her strong performance against ASU.

The first set began slow for the Buffs, who quickly fell 5 points behind the Sun Devils early in the match. A kill by Austin, an ace by senior setter Nicole Edelman, followed by another Austin kill helped to tie the match at 15.

The Buffs attempted a comeback win from behind after ASU secured a two point advantage 20-18. Multiple hitting errors by both sides of the court helped to keep the Buffs within range of winning the set.

Set two included some significantly different play out of the Buffs than the first set. Colorado would fall 13-25 in a lopsided set win for the Sun Devils. Arizona State gained the lead after a kill on the first point of the match and never looked back.

Communication, hitting, service errors and defensive errors on the Colorado side of the net brought about a commanding lead for the Sun Devils who closed out the set quickly and with ease.

The third set of the night was much more balanced for the Buffs, but defensive errors continued to plague the Buffaloes throughout the set. Many players that haven’t seen much court time this season were brought onto the court. This includes sophomore outside hitter Stephanie Shadley, who recorded six kills in the match.

The set concluded with an ASU win after a Colorado hitting error helped them to secure the win.

The Buffs attempted to keep the game alive after back to back set losses against the Sun Devils. Shadley secured the first point for CU after a successful attack from outside. A kill by Austin helped to put the Buffs back in the lead, the first time since the opening set.

Alternating kills by Simpson and Austin helped to give the Buffs a two point lead over Arizona State. A major dig by junior libero Cierra Simpson, helped keep the ball alive to give the Buffs the point, which extended their lead by four.

A kill by Gabby Simpson on the next point gave the Buffs their largest lead of the game, 13-8. Kills by junior middle blocker Katelyn Cuff and Austin helped to increase Colorado’s lead to 5 once again later on in the match.

Three hitting errors by the Sun Devils helped to secure the set win for the Buffs and forced a fifth set.

Colorado kept it close early in the fifth set, a crucial factor in securing the match win. A serving ace by Edelman followed by a kill helped to tie the set at 4-4. ASU would record two points unanswered only to give the ball back to the Buffs following a service error.

With the Buffs down by two going into the midway point of the set, a kill could not come soon enough. Arizona State continued their lead 10-7 before a kill by Shadley helped to keep the Buffs alive.

A timeout was called by the Sun Devils after a discrepancy with the refs on whether or not a ball was hit out by ASU. The point was awarded to Colorado, who now lead the game 12-10.

Kills by Austin and Pfefferle helped the Buffs take a 14-12 lead over the Sun Devils. A final kill by Edelman gave the Buffs the upset over No. 21 Arizona State.

Most of the team saw court time tonight and head coach Liz Kritza made it clear that all of her players’ talents were recognized.

“We see that they’re great players on both sides of the net, and that’s an important piece and that’s good when we needed them to answer the call tonight, so I’m proud of them for doing that tonight,” Kritza said.

Colorado will take on the No. 19 Arizona this Saturday at 7 p.m. in Boulder. 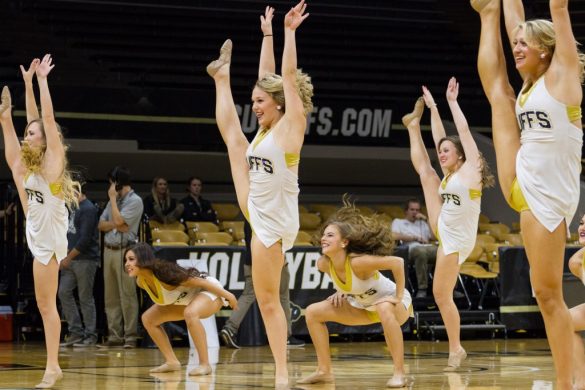 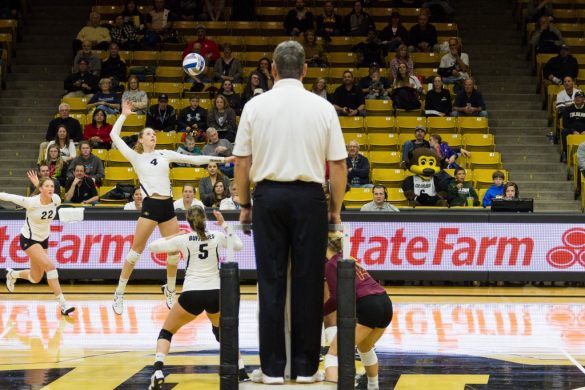 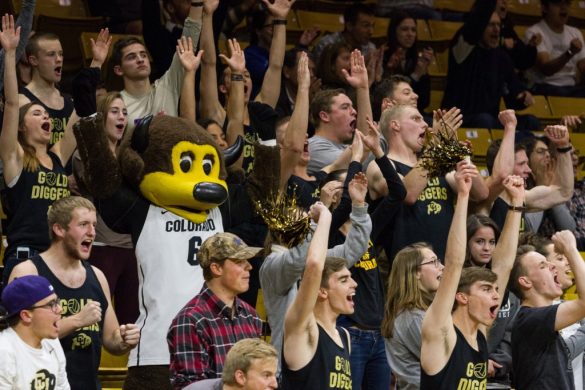 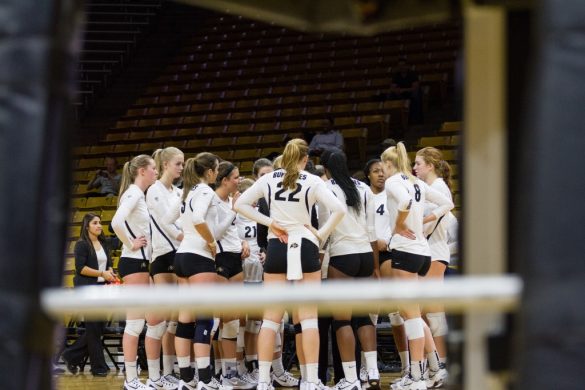 The CU volleyball team meets during a timeout during the ASU game at the Coors Events Center on Nov. 12th, 2015. (Will McKay/CU Independent)