Buffs get reality check with 42-10 loss to Stanford

In the opening quarter of the game, the Colorado Buffaloes football team once again teased spectators with a solid 15 minutes against a good football team.

But all hopes of an enjoyable game were flushed away as things went from bad to worse for the Buffs on Saturday afternoon at Folsom Field. They fell hard to the Stanford Cardinal, 42-10 in front of 40,142 fans, which included former Colorado head coach Bill McCartney.

Stanford won the opening coin toss and elected to receive. The Cardinal began the game by marching down the field and capping a 15-play, 81-yard drive with a short touchdown run by tailback Remound Wright to make the score 7-0 about halfway through the first quarter.

But Colorado answered right back when quarterback Sefo Liufau hit wide receiver Nelson Spruce for a 36-yard gain, bringing the Buffs to the Stanford four-yard line. Spruce tripped after securing what seemed like a sure touchdown, but running back Donovan Lee would power his way into the endzone on the next play, as soon the score was tied at seven.

The Buffs’ biggest challenge in hosting Stanford was containing dynamic running back Christian McCaffrey. At first, the Colorado defense did well against the sophomore from Castle Rock, Colorado. Cornerback Chidobe Awuzie and defensive end Derek McCartney both had big hits on the speedy McCaffery in the first quarter.

But shortly after, McCaffrey began to tear apart the Buffaloes’ defense. With just over eight minutes in the second quarter of play, he exploded out of the backfield, en route to a 40-yard gain to put Stanford in Colorado territory.

He would exit the game after the third quarter when the Cardinal started to run the score up, but finished the day with 151 yards on 23 carries.

The Buffs suffered a setback early. On Stanford’s opening drive of the second quarter, linebacker Jimmie Gilbert got to McCaffery behind the line of scrimmage for a loss of two. After a delay of game penalty, the Cardinal faced a seemingly improbable third-and-18 from the Colorado 43. With a big stop, the Buffs could have had a nice opportunity to tie the game. But within a blink of an eye, Stanford quarterback Kevin Hogan completed a 43-yard touchdown pass to wide receiver Michael Rector.

Hogan, who had been shaky in recent weeks, brought his A-game to Folsom Field. He completed 17-of-23 passes for 169 yards and two touchdowns. He also rushed for 49 yards and scored a touchdown on the ground.

Liufau played well, but made a few deflating mistakes throughout the game. The first came in the second quarter with the Buffs down 21-7 as they were trying to get a quick score before halftime. Liufau greatly overthrew Spruce and was intercepted at the Stanford 43-yard line, destroying all hopes of a manageable game at halftime. The Cardinal would have a comfortable 28-7 lead shortly after.

“If you want to win games, you have to finish off drives and we didn’t,” Liufau said. “I’m pissed off. To put in a week’s worth of preparation and come out flat like that is really frustrating.”

He would finish just 125 passing yards, completing 10-of-18 attempted throws. Liufau would also finish the game as the Buffs’ leading rusher, gaining 50 yards on seven carries.

Stanford’s offense, even though it started slow, turned into an impressive example of efficiency. The Cardinal managed 472 yards of total offense.

Familiar shortcomings again proved to be the death of the Colorado Buffaloes. Once again, the offense failed to stay on the field and stalled out in crucial situations.

The Buffs’ time of possession in the first half was a meager 7:39 and the offense managed only three measly points in the final 45 minutes of the game.

Even with the Buffs down 14-7, Liufau and the offense moved the ball well, getting Stanford to the 25-yard line before a three-and-out brought kicker Diego Gonzalez onto the field to try for three. Gonzalez shanked the 37-yard attempt. 12 plays and 80 yards later, Stanford increased its lead to 21-7.

With Stanford leading 35-10 in the third quarter, the Buffs got a chance to regain some desperately needed momentum when safety Tedric Thompson intercepted a pass from Hogan.

Thompson returned the ball 71 yards to the Stanford 3-yard line, but Liufau would make a few more killer mistakes, effectively ending all hopes of a comeback.

With the Buffs in the driver’s seat, the junior from Tacoma, Wash. slipped up again. On second and goal, he overthrew Spruce on what looked like a would-be touchdown. On fourth down, he scrambled left and had a quick look but misfired and threw the ball at Spruce’s feet.

At the end of things, the Buffs managed to seal their own fate with various mistakes and mishaps. 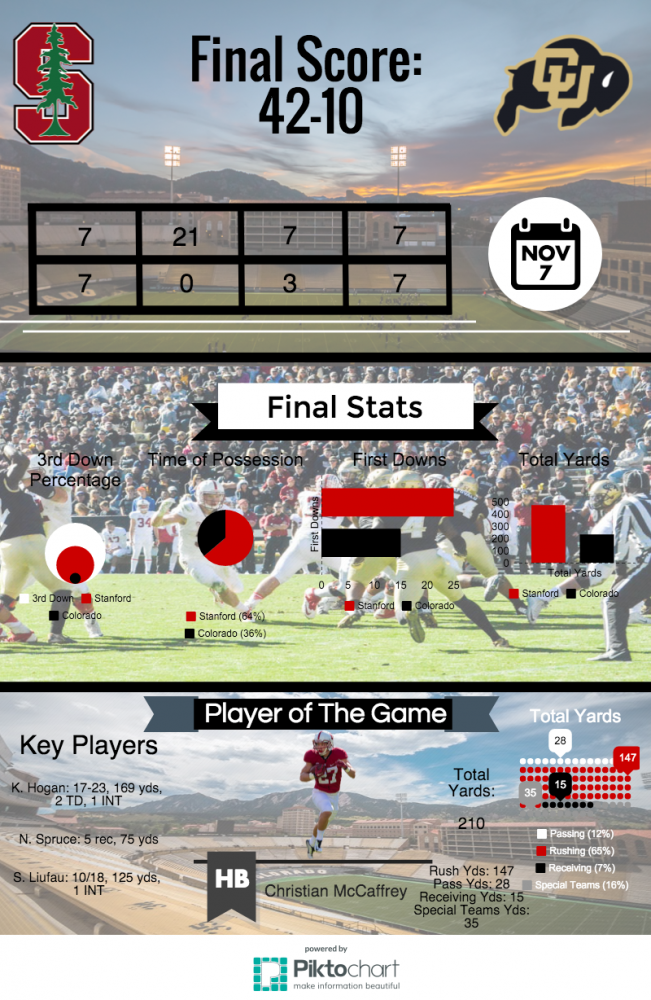 “It’s demoralizing,” Thompson said. “Every team we lost to didn’t have more talent than us. It hurts to keep losing these games knowing that we’re right there. It’s out of the coaches’  hands at this point. We have to come together as men and accomplish our goals.”

The Buffs managed to convert only two out of 11 chances on third down. Conversely, Stanford capitalized on ten out of 16.

After Stanford pulled their starters, the Buffs followed suit and sent backup quarterback Cade Apsay to take the snaps. Despite the switch of personnel, the Buffs still struggled. Apsay was sacked three times and threw a bad interception in his brief appearance.

Tailback Phillip Lindsay was absent from a large chunk of the game. He recently has been seeing less and less snaps in favor of Patrick Carr and Donovan Lee. MacIntyre explained after the game that the change was an ongoing experimental offensive strategy and not due to Lindsay’s performance.

The Buffs will once again deal with a somewhat misleading loss. The postgame stat sheets might say otherwise but Colorado lost today because the offense could get nothing done, which forced the defense to be on the field for 38:01.

The failures of the offense to score seemed to wear out the defense, which seemed to get worn down trying to contain all of Stanford’s talented players.

The Buffaloes (4-6, 1-5 Pac-12) will have to win all of their remaining three games to qualify for a bowl in 2015. They will host USC on Friday, Nov. 13 and will travel to play Washington State and Utah for their final two contests.

Kickoff is scheduled for 7 p.m. MST on Friday. 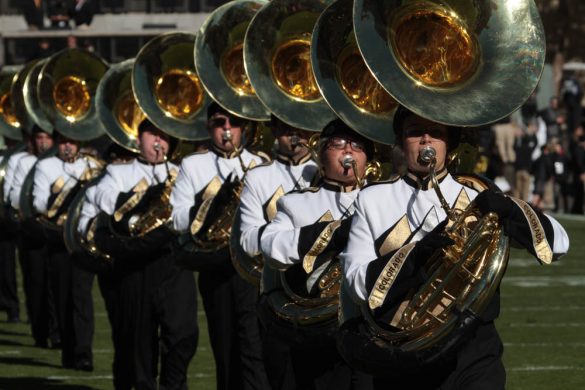 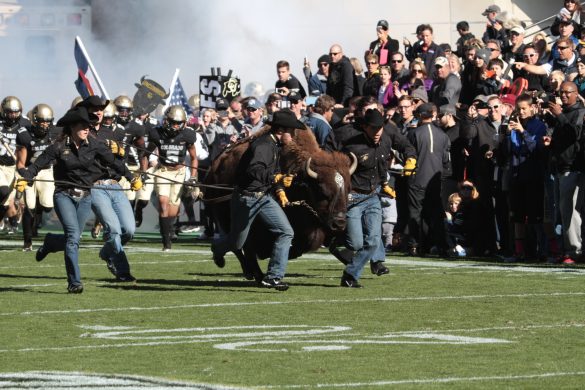 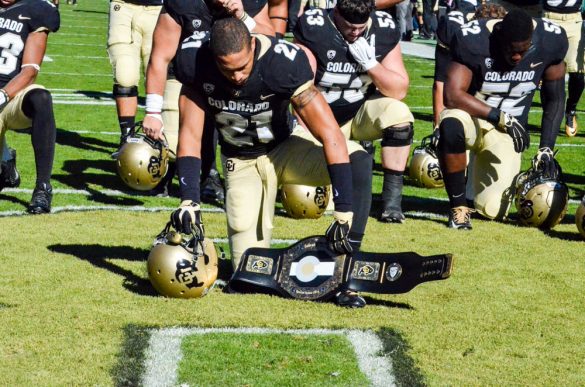 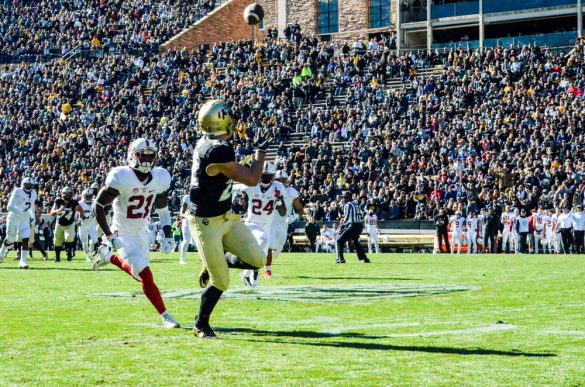 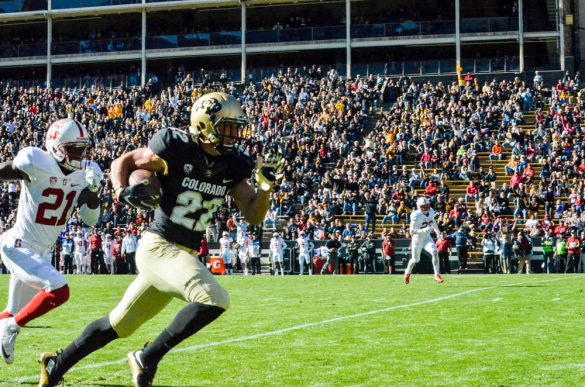 Nelson Spruce (22) makes his way to the end zone during last year's Stanford game after a catch against Cardinal. (Elizabeth Rodriguez/CU Independent) 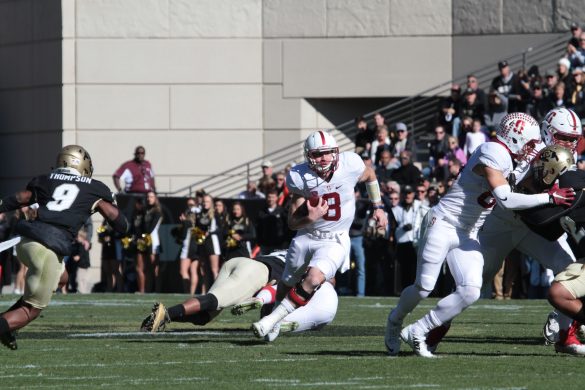 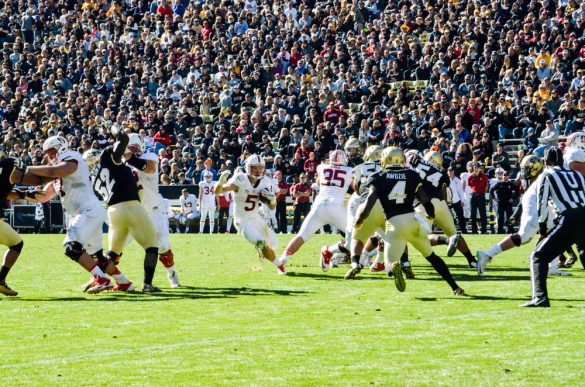 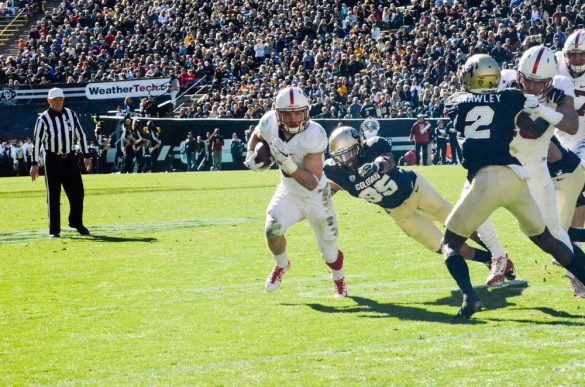 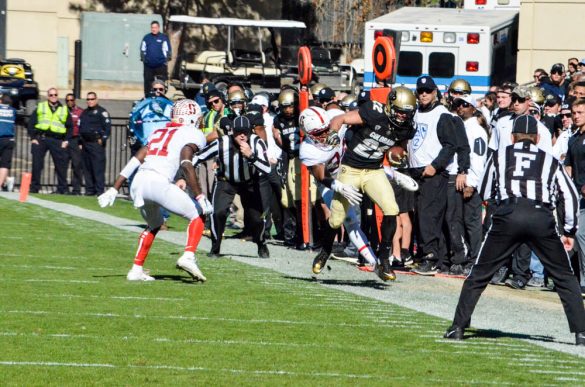 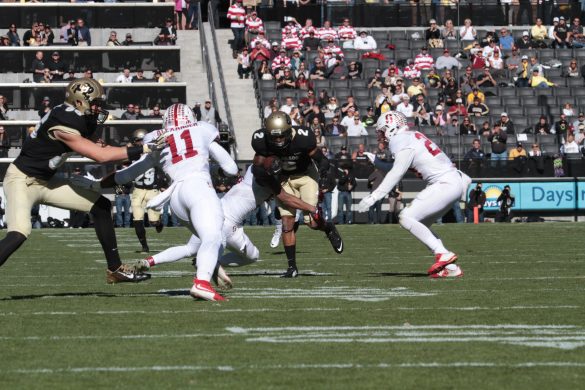 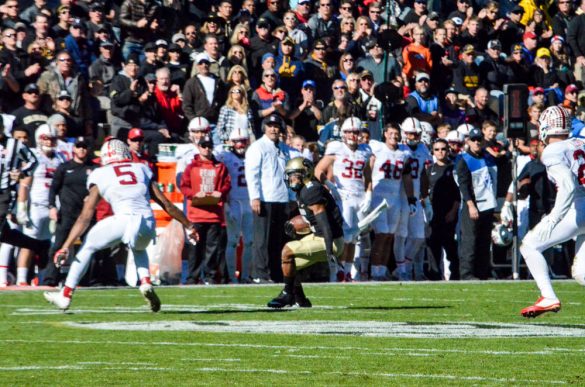 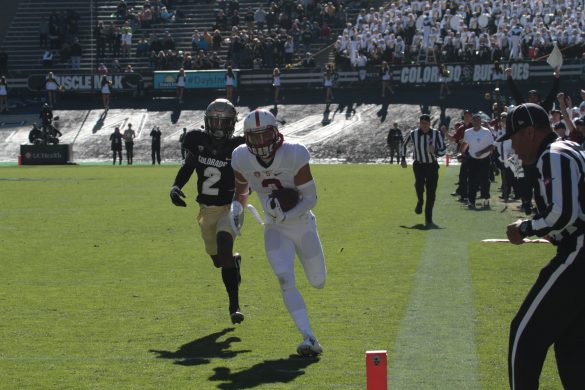 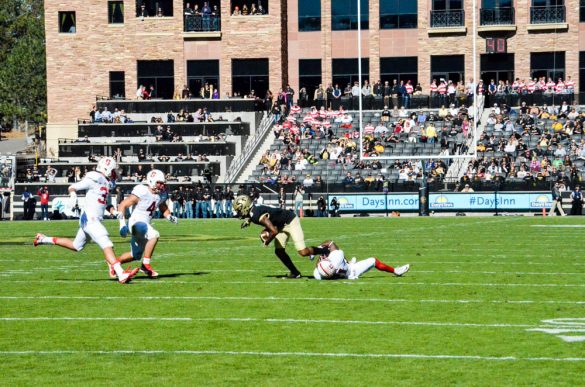 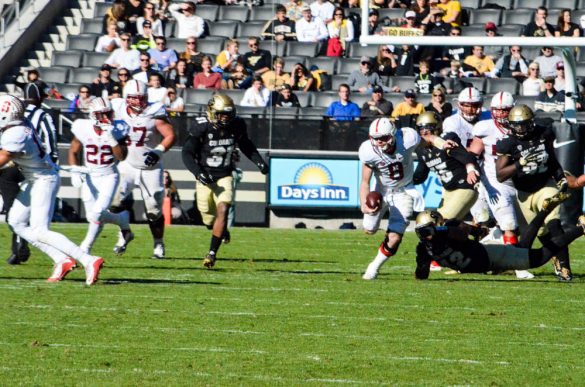 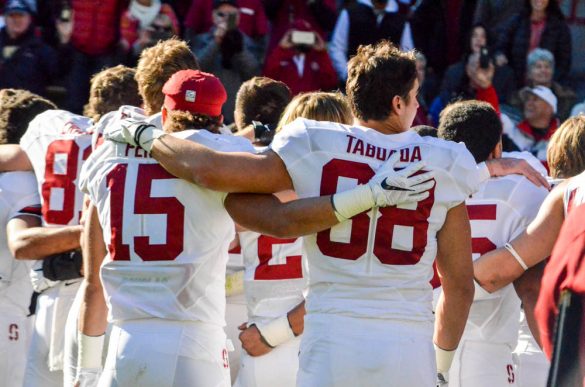