Offensive line leading the way to success for Colorado football 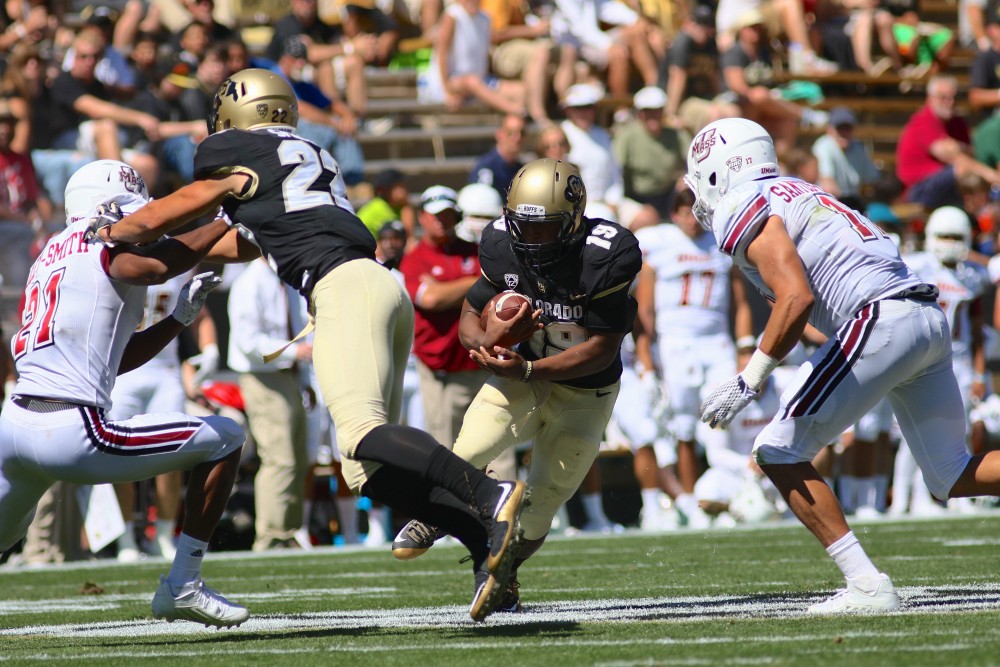 Junior RB Michael Adkins II looks to exploit a gap in the UMass defence during the second quarter of play at Folsom Field. (Nigel Amstock/CU Independent)

After losing the season opener to Hawaii 28-20, the University of Colorado football team has improved to 3-1. A big part of the Buffs’ victories thus far has been an electric running game powered by a standout offensive line.

Junior quarterback Sefo Liufau has not been sacked once since the offensive line allowed four in the opening game at Hawaii.

“The main thing we did from Hawaii to these last few games was just focus on the little things,” junior center Alex Kelley said. “We kind of lost our poise vs. Hawaii. We weren’t as focused.”

Kelley, who played 988 of the team’s 996 snaps last season, has been a fixture on the offensive line this year. He has been responsible for only one sack so far.

With the Oregon Ducks (2-2) coming to Folsom Field this Saturday to play on ESPN in primetime, Kelley and the Buffs are ready for some duck hunting.

“I honestly believe that we’re a really talented offensive line,” Kelley said. “I’ve honestly never felt this excited going into a Pac-12 game. You can tell in the locker room, too, that that’s the same feeling. Last year it was like, ‘Ugh, we’re playing Oregon,’ but now it’s like, ‘Whoa! We get to play Oregon, let’s go. Let’s roll!’”

Although the Ducks handed the Buffs a sizable defeat last year, Colorado did not allow the Oregon defense to sack Liufau. The Buffs will aim for a similar result Saturday.

“You’ve got to be fundamentally sound and move your feet,” offensive line coach Gary Bernardi said. “Our guys know what to do. They have to execute.

“They get along and they ask good questions,” he continued. “Sometimes people forget this, and I think it’s really important, but it’s all about trying to get better, because they’re young. John Huckins and Sam Kronshage had never started before this year.”

Despite never starting before, sophomores Huckins and Kronshage are finding a niche this year. Huckins trails only Kelley and senior Stephane Nembot for total snaps played, and has also allowed just a single sack this season.

The Buffs’ offensive line will square off against an Oregon defense that was badly beat up by the Utah Utes last week in 62-20 clobbering. On top of that blowout loss, the Ducks’ defense has only five sacks this season.

“I think we’ll get a hungry [Oregon Ducks] team,” Liufau said. “I think they’re going to want to come out and prove to everyone that they’re not the team that got beat last week. I still think they are a really good team, and we have to come out ready to play.”

Buffa-lunatics out there are eagerly awaiting to see if the Buffs will come out ready to play Saturday. A very large crowd is expected for this game. The last time the Ducks came to town, in 2013, just under 46,000 people showed up. Expect a similar frenzy for Saturday’s game.

Kickoff is scheduled for 8 p.m. MST, and the game will be broadcast by ESPN.