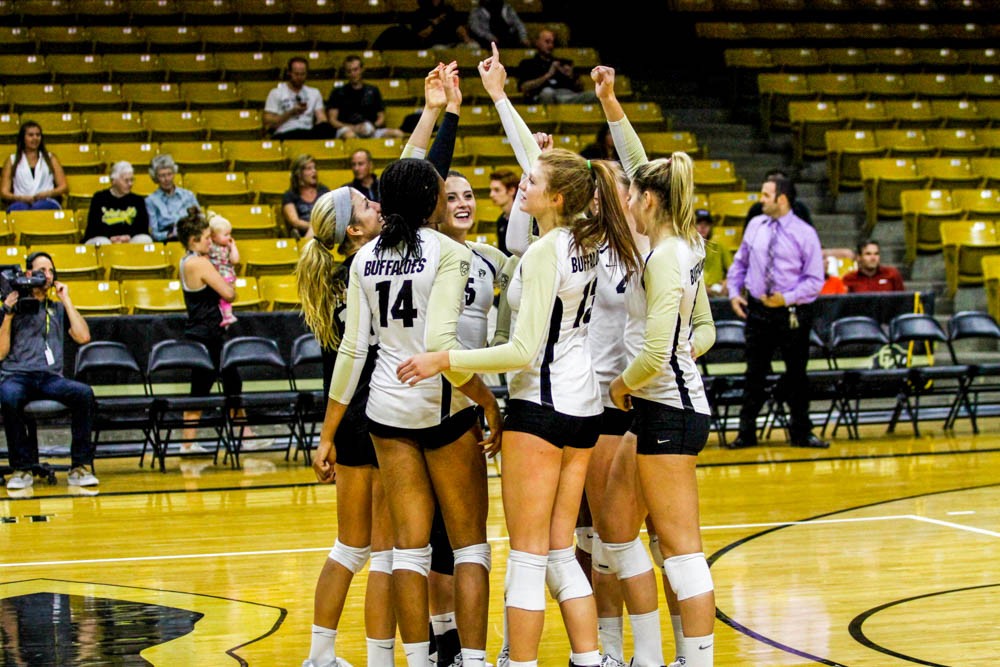 With all the excitement surrounding the Rocky Mountain Showdown last weekend, it was easy to overlook the excellent series the University of Colorado’s volleyball team played during the Omni Invitational.

Colorado, who is currently receiving votes in the top 25, went 4-0 this weekend after beating Montana State, Weber State, George Mason University and Air Force Academy over the course of Friday and Sunday.

CU took the court again later that night to defeat the Weber State Wildcats in three sets: 27-25, 25-16 and 25-18. Simpson once again led the team’s offense to a dominating win, putting up another 16 kills for the team. Freshmen middle blocker Naghede Abu also had a strong showing with 10 kills against the Wildcats.

Sunday morning marked the third game of the Invitational as the Buffs took on the George Mason Patriots. The Patriots kept the game close, nearly forcing a fifth set after taking the Buffs past 25 points in the fourth set. Colorado closed out the game 25-15, 23-25, 25-16 and 26-24 without having to play to 15 in an extra set.

Sunday night capped off day two of the Buffs’ double header as they welcomed a fellow Colorado team to Coors.  The Air Force Falcons took to the court in an attempt to upset CU’s sweep at the invite. The Buffs closed out the win in three quick sets against the Falcons 25-19, 25-18 and 25-23 and were able to improve to 4-0 on the weekend.

From the very first serve, the Buffs were dialed in and the first point of the game was awarded to Abu on a kill. Simpson also came out swinging hard and put down two consecutive kills. Senior outside hitter Alexis Austin, who had been relatively quiet all weekend, appeared focused and managed to register seven kills in the first set, as many as Simpson.

The longest rally between the two teams came in the first set, and both junior libero Cierra Simpson and her sister Gabby came up big for the Buffs defense. The duo had three digs in that point alone, and helped keep the ball alive long enough for Gabby to ultimately win the point for the Buffs.

The Buffs’ momentum did not waver as they entered the second set. Sophomore middle blocker Anna Pfefferle put up a block winning the Buffaloes the point.  The very next point would also belong to Pfefferle, who managed a kill against the Falcons.

Gabby Simpson had consecutive blocks allowing the Buffs to break away from the Falcons who had tied the set earlier. Simpson continued to lead the way for the CU offense by showing Air Force the power behind her spike and winning the next two points.

The second set seemed to be all about the block as Colorado had 10 alone in that set. The set also ended with a solo block by Pfefferle to give the Buffs the W.

The third set brought the most intensive play of the night as Air Force attempted to make up for the two lost sets.  But they couldn’t shake up the Buffs’ confidence by any means, as they would go onto secure the win.

Pfefferle and Simpson managed impressive kills against the Falcons’ scrappy defense. But it didn’t get the opposition down — the Falcons kept the game close. CU contributed to the closeness of the set with service errors and missed opportunities by the Colorado defense covering the blockers.

The lady Buffs were able to pull away in the third set, leading 14-7 at one point. Abu aided in establishing the lead with another series of two kills.

The commanding lead did not stay long and the game was soon tied 18-18. But the lady Buffs would not fall behind, and a Pfefferle block followed by an Air Force service error helped cement the three-set win for CU.

The Buffs composed an outstanding performance by never once giving up the lead to Air Force.

“It hasn’t always been perfect and happy through this non-conference portion or preseason,” said Kritza in reference to starting Pac-12 play this week.  “We’re excited to get going…We have to make sure we take care of business. Everybody is 0-0 in the Pac-12.”

Conference play officially begins this week for the lady Buffs who will be traveling to play Utah on the road Sept. 23 at 6 P.M. MST. 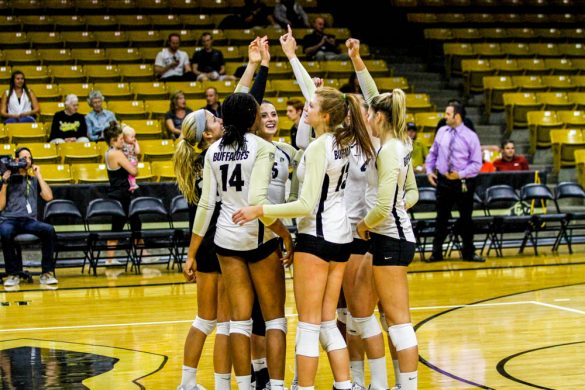 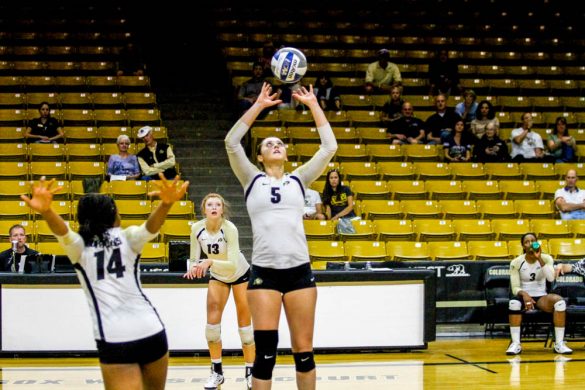 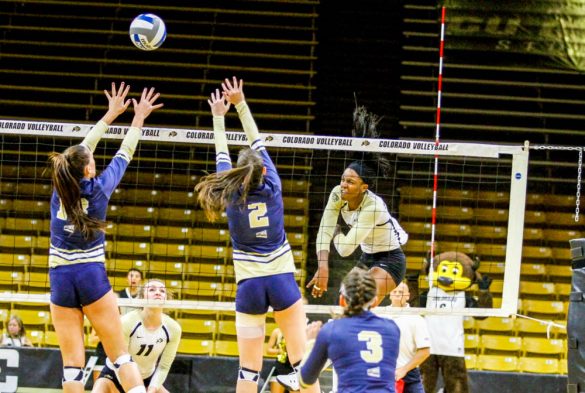 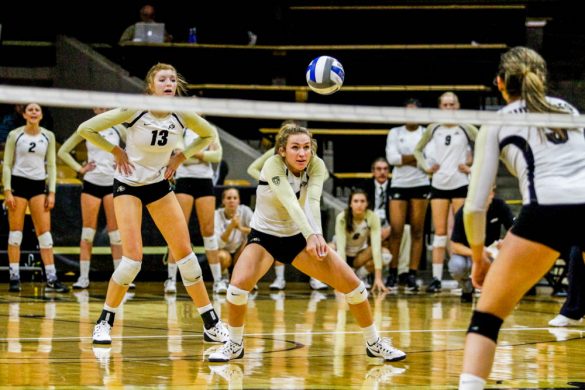 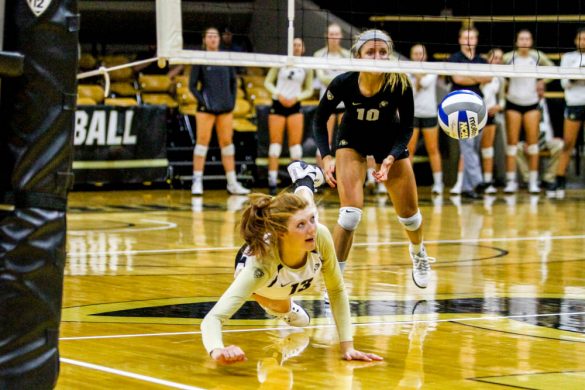 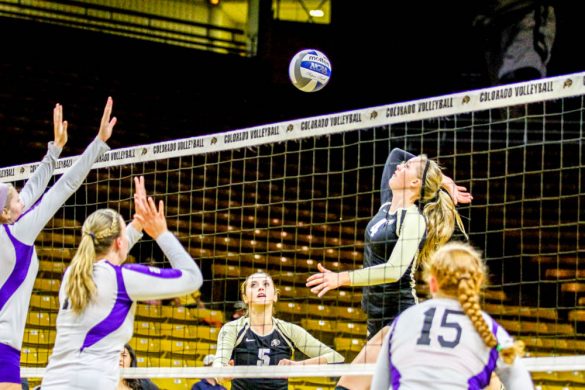 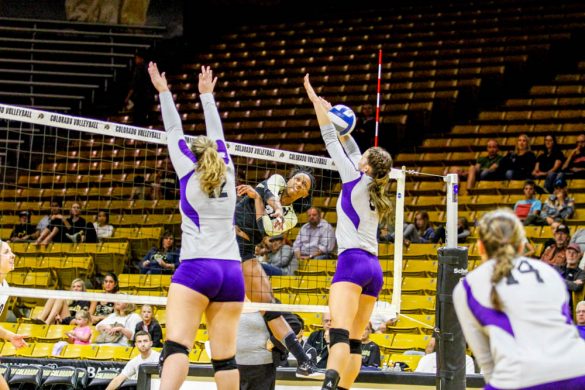