A win against Colorado State football is imperative 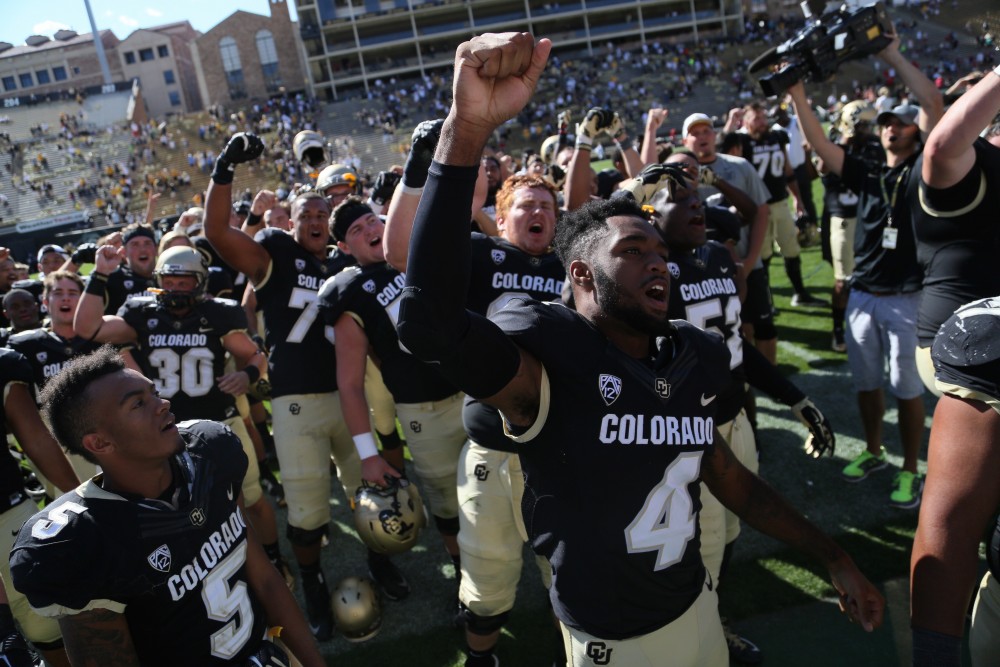 The Buffs celebrate their 48-14 victory over the UMass minutemen at Folsom Field. (Nigel Amstock/CU Independent)

Even though it was just the first game of the season, the University of Colorado football team’s loss to Hawaii created a ripple effect that carries consequences for the rest of the season. First and foremost, every non-conference game became vitally important. They all became must-wins, especially this weekend against Colorado State.

The Buffs found motivation, whether from anger over the Hawaii loss or tiring of losing every week, and blew out the University of Massachusetts. This week is a little different. As every Buffs fan knows, Colorado does not need any extra motivation for the annual game against Colorado State.

“I see it as a rivalry,” Buffs coach Mike MacIntyre said. “They do too see it as a rivalry. Definitely, it’s a rivalry game to all of us. The best way for me to explain it is, you win or lose this game, and you go out to eat dinner for the next 365 days the waitress, if she’s a CSU fan…you hear about it. So it’s always a fun one to definitely win because of that for me.”

After almost a decade of losing seasons for the Buffs, the game has lost its national prominence. That being said, within the state of Colorado, the Rocky Mountain Showdown has retained its status as a heated rivalry. This year’s matchup is the most anticipated the game has been in years. Colorado feels this will be a breakout season, and CSU is hoping to improve upon last year’s bowl appearance.

CSU is coming off a heartbreaking overtime loss to Minnesota. While the Rams couldn’t pull off what would have been a signature win, the result shows CSU is not a team to be taken lightly. The Golden Gophers lost by just six to No. 2 TCU a week prior. CSU has the talent to compete with elite competition, and it starts at wide receiver.

The biggest matchup of the night, perhaps, will be the ability of CU’s secondary, specifically senior cornerback Ken Crawley, to cover CSU’s star wide receiver Rashard Higgins. Last season, Higgins burst into national spotlight when he led the country with 1,750 yards. He was a finalist for the Biletnikoff Award, which is awarded to the nation’s top receiver.

Higgins sat out last week due to an ankle injury, but CSU coach Mike Bobo said he is “very hopeful” Higgins will play this week.

Colorado’s secondary has been decent thus far this year, but it has not faced anyone with Higgins’ talent. That being said, CSU yanked starting quarterback Nick Stevens after he threw two interceptions last week in favor of Colman Key. This tumultuous quarterback situation should give Colorado’s experienced secondary an edge.

Still, it wasn’t Higgins who gave Colorado problems last year. It was CSU’s running backs. The Rams rushed for 266 yards against the Buffs that game. Last week against Minnesota, CSU had 176 yards on the ground, led by redshirt junior and Purdue transfer Dalyn Dawkins.

Colorado finished as one of the worst rushing defenses in the country last year, but so far this season, it has fixed this problem. In two games, it has given up just 247 yards on the ground. Last year, the Buffs gave up nearly that many yards each game. If it can continue to stifle the run and keep Higgins in check, Colorado’s defense will have done its job.

On the other side of the ball, the Buffs have surprised a lot of people. With the return of junior quarterback Sefo Liufau and senior wide receiver Nelson Spruce, many expected Colorado to rely on the aerial attack that drew so much attention last season. But that has not been the case, as the Buffs have turned to their running game to carry their offense.

Last week against Massachusetts, Colorado rushed for a staggering 390 yards, led by junior running back Michael Adkins. MacIntyre acknowledged that CSU has a strong secondary, so expect the Buffs to continue pounding the ball until they are forced to throw.

“Coming off of last year, teams are trying to defend the passing,” MacIntyre said. “They’re not supporting the run as quick. We knew that would happen. We improved on our run game last year and we improved on it this year. I’m pretty sure teams will start loading the box up more…I imagine as teams start trying to load the box up we won’t run it for as much, but we’ll throw for more and I think we’ll have a good balance.”

Even if MacIntyre is right and teams start to load the box to stop the run, it shouldn’t be a problem for the Buffs. It will only give Liufau more room to work with his arsenal of weapons: Spruce, and sophomores Shay Fields and Bryce Bobo.

That’s assuming Colorado can continue to keep Liufau on his feet. The offensive line looked good against UMass, but the victory came at a cost. Left tackle Jeromy Irwin will miss the rest of the season after he tore his ACL Saturday. Sophomore Sam Kronshage, who saw some playing time last year, will replace him.

This game is important every season, but this year a win in the Rocky Mountain Showdown is imperative. To keep their bowl dreams alive, the Buffs have to find a way to pull out a win this Saturday.