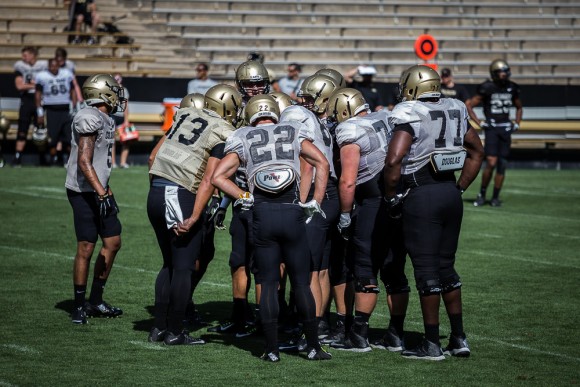 Regardless of the sport, or even a sport’s competition level, the first game of the season is always accompanied by a buzz of excitement. But this year is a little different for the University of Colorado’s football team.

The anticipation that began to build back in March is threatening to burst as the Buffs get ready to travel to Honolulu for their 2015 season opener against the University of Hawai’i. The buzz inherent to this time of year has risen to a deafening roar.

Senior defensive back Jered Bell, who will be returning for his sixth season at Colorado after missing two with injuries, perfectly summed up the excitement.

“I’m very confident (in the team this year),” Bell said. “We set our sights on a bowl game this year and we’re doing everything we can. We’re speaking like this is happening and we’re working hard to achieve that goal as a team. It’s a true blessing to be able to stay out here six years and to actually go to a bowl game in my career here.”

The hype surrounding the team is easy to understand. Since entering the Pac-12 four years ago, the Buffs have been nothing more than a whipping post for the rest of the conference. The team has not made a bowl game in eight long years.

Both the program and the fanbase alike have been desperately awaiting the team that brings the once-historic program back to prominence, and at long last that wait might finally be over.

The word out of preseason is that the Buffs got better all over the field on both sides of the ball. Junior quarterback Sefo Liufau is set to improve upon his record-breaking season with an offense that is primed to be the most explosive the school has seen in years.

Senior wide receiver Nelson Spruce said to expect similar if not better numbers this year.“We’re really excited,” Spruce said. “We had a big year as an offense last year, and obviously the goal is to improve on that. I think everyone’s excited to get into the season.”

The players have been working on drills designed to help them excel in late games, something that was their Achilles’ heel last year. Most importantly, Colorado signed a defensive coordinator this year who seems perfectly suited for the job in Jim Leavitt.

The defense compared to last year is a lot further along,” Liufau said at CU’s Football Media Day last month. “(Coach Leavitt) brings a little extra spark to them. He’s always moving, always yelling at us, but… the guys rally around him.”

Coming off of a year filled with heartbreak, but also vast improvements, Head Coach Mike MacIntyre and his team have their eyes on a goal that seemed before like it might forever stay out of reach: ending Colorado’s bowl drought.

That journey begins this Thursday about 3,350 miles away, in the home of the Rainbow Warriors. Colorado fans will get their first chance to see if the hype coming out of the Buffs’ camp is to be believed. While the Buffs match up well with Hawai’i on paper, this is not a game they can afford to lose if they want to make that coveted bowl game.

As a member of the Mountain West Conference and coming off several less-than-stellar seasons in the recent past, Hawai’i is an opponent some people may quickly dismiss. That being said, they are far from a pushover team, which the Buffs learned last season.

While the Buffs came out of the Rainbow Warriors’ last trip to Boulder with a win, it was anything but pretty. Colorado had to scrape its way to a hard-fought 21-12 victory in a contest that proved far closer than it was anticipated to be. Like the Buffs, Hawai’i is projected to be much better than the team that went 4-9 last year.

The Rainbow Warriors’ biggest improvement this year is at quarterback with Max Wittek making his Hawai’i debut under center against Colorado. Two years ago, he transferred to Hawai’i from USC where he had lost the starting job after multiple years of battling with eventual starter, and now Heisman candidate, Cody Kessler.

Whether that praise is deserved or not, the Rainbow Warriors are expecting to ride Wittek’s arm all season — a strategy that plays right into Colorado’s hands.

The Buffs’ secondary is one of the team’s strongest units, and expect them to be instrumental in a strong start to the season as well. It is led by junior safety Tedric Thompson, who was one of the defense’s best players last year. Behind him is senior Kenneth Crawley, a long and athletic cornerback. The veteran unit should be able to stifle the Rainbow Warriors’ passing attack.

Colorado matches up well with Hawai’i in another way as well. Anyone who watched the Buffs last year knows they could not stop the run. Luckily for Colorado, Hawai’i is as bad at running the ball as the Buffs were at stopping it. The Rainbow Warriors were the third worst rushing team in the Mountain West last year with 149.5 yards per game.

The combination of Colorado’s secondary and Hawai’i’s inability to run the ball should allow the Buffs’ defense to control the game. This should give Liufau and the offense good field position and opportunities to capitalize on.

The only wrinkle in what should be a Colorado victory is the location. Any away game in college is presents a challenge, but the issues with traveling to Honolulu stand out. Kickoff is at 7 p.m. in Honolulu’s local time, which is 11 p.m. in Colorado. Hawai’i could take control of the game early if Colorado comes out sluggish because of the time difference.

The bottom line is this is a game Colorado not only should win, but also needs to win. To realistically keep their bowl dreams alive, the Buffs have to be 4-0 going into conference play. There is no margin for error. A win will keep them right on track, but a loss to Hawai’i means losing the chance to achieve the goal that they hope will define their season: making a bowl game.