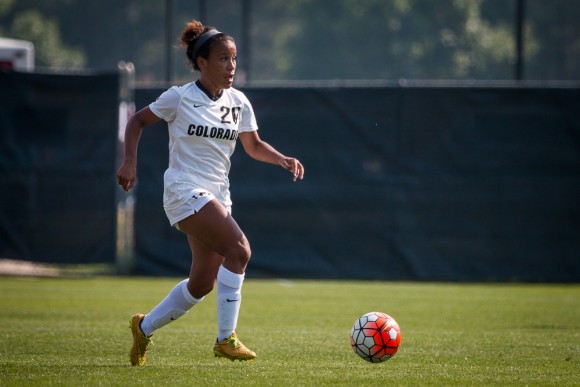 At home for the first time in the 2015-2016 season, the University of Colorado women’s soccer team gave fans plenty to cheer for as they blanked in-state rival Colorado College by a score of 3-0. There were occasional defensive lapses and sometimes the final pass wasn’t there, but it displayed all of the things that made Colorado successful last season: determination, grit and a talented forward from Maple Valley, Washington.

That forward is junior Brie Hooks, who had a hand in two of the three CU goals, assisting on one and scoring on another. After some uncertainty following the Buffs 1-1 draw to Colorado State, Hooks believes that Sunday’s win was the proper display of how good this team can be.

“I think today really showed the team that we have been proving to be all of preseason so far,” said Hooks after the game. “We had a really good showing today.”

Across the board, Hooks was right. Though the first 20 minutes of the game were slow for the Buffs, the doors finally opened when freshman midfielder Erin Greening opened her CU account with a driven shot from just outside the 18 yard box, hitting the bar down and going in. After that it was all Colorado, who out-shot CC 15-7 and won the corner kick battle 5-0.

Ten minutes after Greening scored, Emily Paxton got on the end of a ball from Hooks, doubling the Buffs’ lead. The chemistry is evident between Paxton and Hooks on the field; after the first goal it became clear that CU was much more comfortable in the final third.

“If you get your first goal it kind of calms the whole pace of the game down and things start to open up and I think it showed in the second half,” Hooks said.

The Colorado Cup stands at the entrance of Prentup Field. (Matt Sisneros/CU Independent)

With a chipped volley over the goalkeeper, the forward tacked on a third goal which all but sealed the deal for CU. But perhaps more noteworthy were the personnel changes in the second half. While hinting at a possible position battle in the preseason, head coach Danny Sanchez remained tight-lipped on who his first choice goalkeeper would be. After the first half, senior Kate Scheele came off in favor of redshirt freshman Scout Watson, who played admirably in the final 45 minutes. In addition to the goalie change, forward Madison Krauser moved to play the outside back position and quickly became one of the best players on the field.

What makes the change so impressive? She was told that it was going to happen only a week prior.

“I’ve only had a couple practices with it and it’s a whole new game really” Krauser said. “As a forward I have my back to the goal, but as an outside back I’m seeing the whole field. I’m working on my positioning and with more games I’ll be more comfortable with it.”

Sanchez praised Krauser’s versatility, and his team as a whole, for their performance following the win. But the Buffs must keep the momentum going with a short turnaround as they face BYU on Friday. Colorado beat Cougars the past two years, and both games were in the NCAA tournament. Even though the season has only just begun, Hooks and the team look at Friday’s trip to Provo as if it were another tournament game.

“That’ll really test us,” said Hooks. “It’s like a tournament game, so proving ourselves against them on Friday will be really good for us and I think we’re going to do well.” 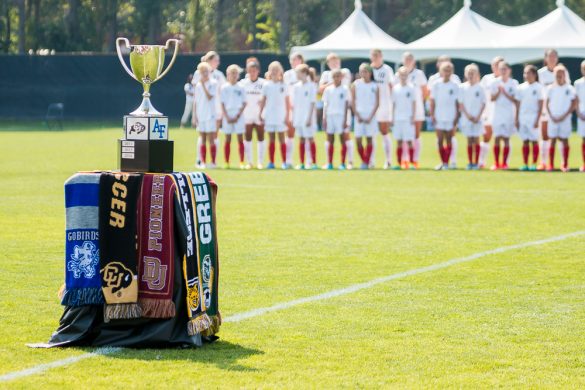 The Colorado Cup stands on the field during introductions of the CU soccer team in their match against Colorado College. (Matt Sisneros/CU Independent) 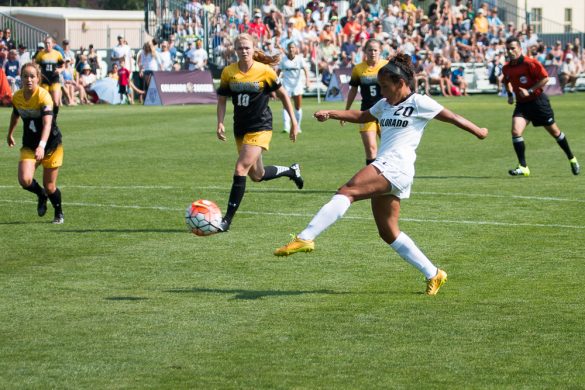 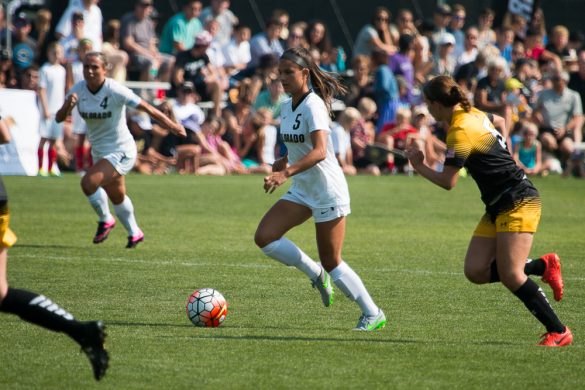 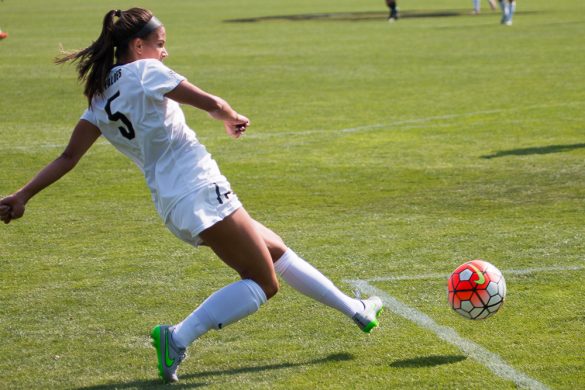 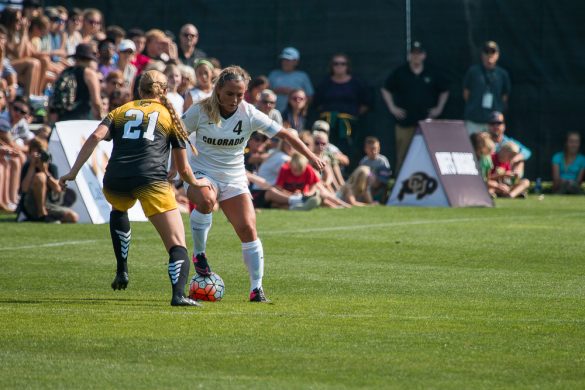 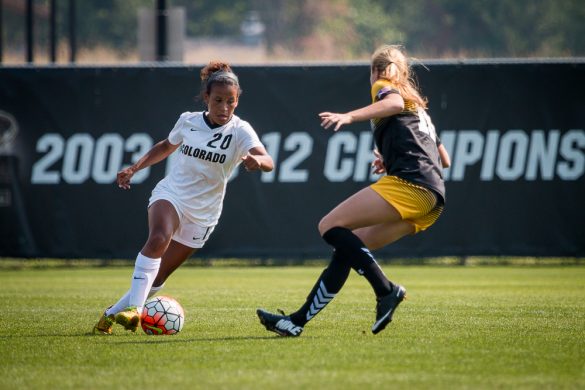 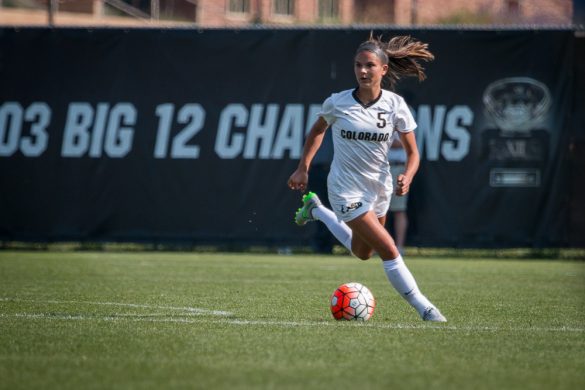 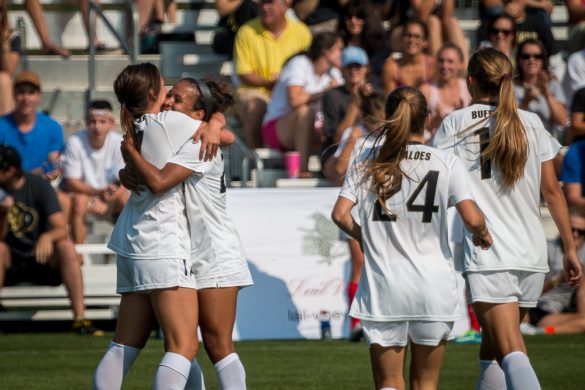 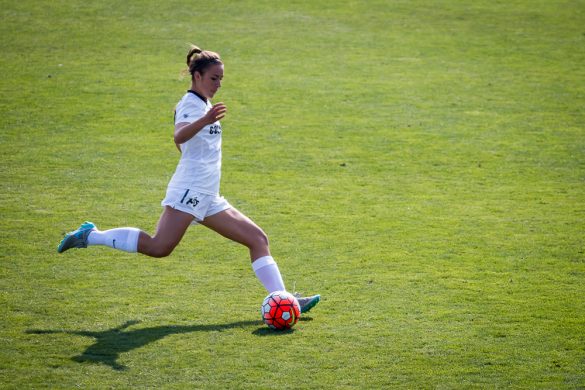 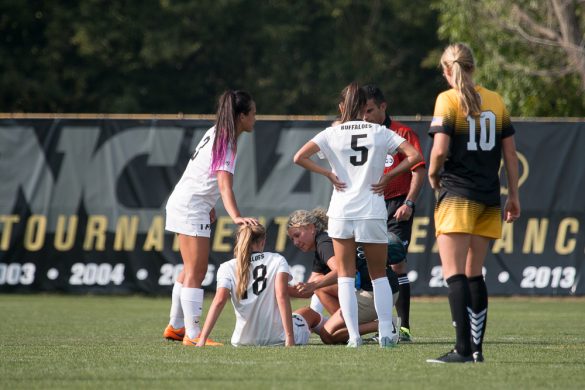 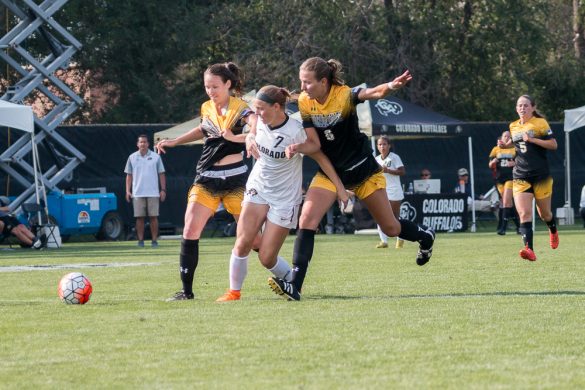 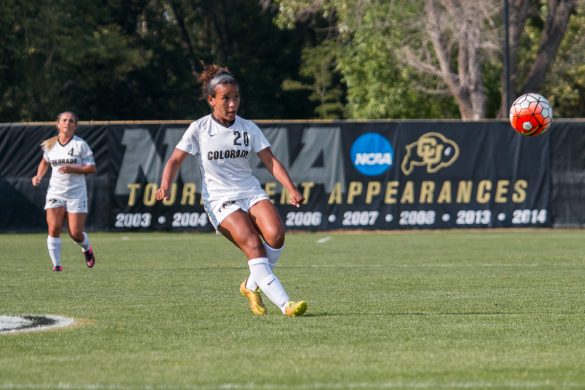 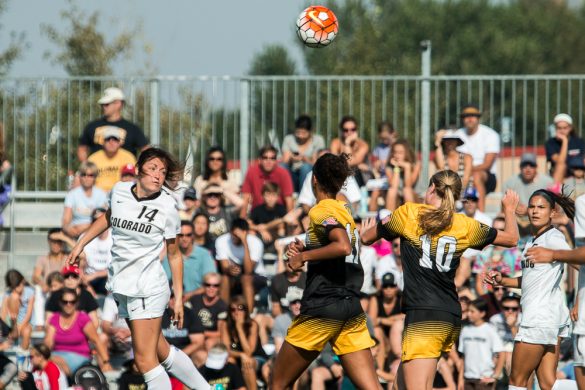 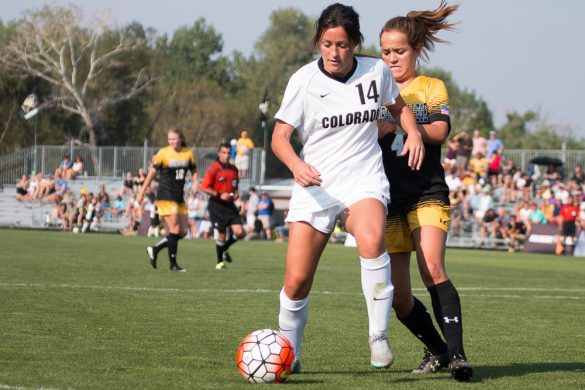 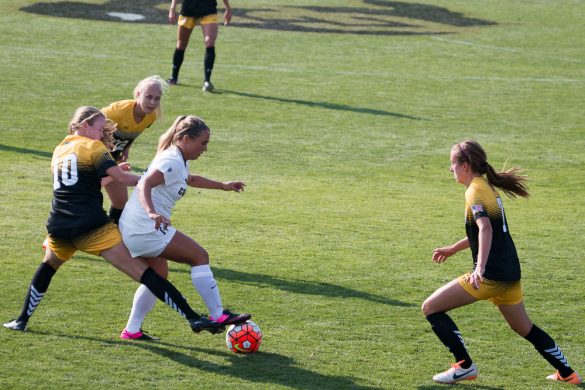