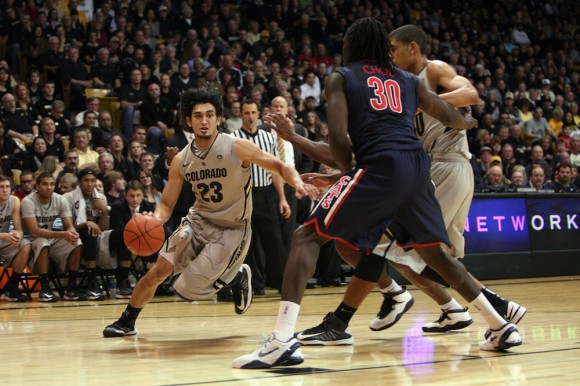 Sabatino Chen drives towards the hoop against Arizona on Feb. 14, 2013 at the Coors Event Center. (Kai Casey/CU Independent)

Shortly after graduating from the University of Colorado in 2013, former Buffs guard Sabatino Chen took his talents to Taiwan to play with the Yulon Dinos. Two years later, his coaches are forcing him to reassess his options.

Things were going well for Chen during his first year in the pros. He was enjoying a consistent position in the starting lineup, averaging 12 to 15 minutes of playing time each game, and scoring around seven points per game. He even signed a three-year contract with his new team with a player option to opt out of the third year.

“My role has been what it was at CU — being a versatile player and stopper on defense,” Chen said.

Chen compares the level of competition in the Taiwanese league to that of a lesser Division I, or better Division II, college style of play here in the States. The money wasn’t half bad, either.

“The pay here doesn’t quite reach the pay in the NBA, but the pay is well enough that I can see myself playing here and making a comfortable living for myself for the next few years,” Chen said.

But, as life would have it, all good things must come to an end. In January of 2014, which ended up being a terrible month for current and former Buffs players all across the globe, Chen hit a little bump in the road, that being a Jones fracture in the fifth metatarsal of his right foot. The injury would require surgery.

It wasn’t exactly a welcomed change.

“It was really tough at first to deal with because I had a lot of expectations for that season,” Chen said. “I also had never been that seriously injured before since my sophomore year of high school and [that] was really the first real games I had ever missed in my career due to injury.”

And because Chen, like most people, wasn’t equipped to play basketball on crutches, he missed the rest of the season due to the injury.

“[The hardest part was] probably just to stay motivated and keep getting better on my own even though I wouldn’t really get better in the games or on the teams,” Chen said. “I had to just push myself, whether it was rehab, or lifting, or shooting. Just doing everything on my own.”

After completing his first year in the Taiwanese pros, Chen broadened his experience with a little offseason play. After being cleared to play once again, Chen explored new options when he joined the junior national team in Taiwan during the summer.

Surprisingly, he regretted the decision.

“I kind of rushed myself back into playing when I should have spent most of the summer just rehabbing and taking it easy,” he admitted.

Instead of fully recovering from the foot injury, more problems arose throughout his recovery process. He developed a lot of back tightness from using the crutches for several weeks, a condition he’s still recovering from today.

Things got worse for Chen once he reunited with the Dinos in the fall. Prior to his second season with the team, his coaches heard a rumor that Chen would utilize the opt-out option for the third year of his contract. He’s not exactly sure where they heard that.

“Taipei is really small,” Chen said. “It’s a big city, but it’s a small community, especially with basketball. If somebody said anything [about my leaving] it would just get around.”

That’s when the coaches started coming up with excuses not to play him.

“[The coaches] would say stuff [about benching me], like my communication wasn’t as good or my defense wasn’t as good,” Chen said. “Then they kind of just left me alone for the rest of the season.”

From there on out, Chen went from starting games to seeing five minutes a game, if he was lucky. The decision to bench him certainly altered the chemistry on the team this season.

“[My teammates] felt kind of bad,” Chen said. “They’d always ask me why coach won’t play me and say they needed me out there with them. We were struggling sometimes. The culture there is really obedient, especially to the coaches, so they would never say anything to the coaches or talk to them.”

The disparity between the players and the coaches wasn’t a new concept for his team.

“We were all close on the court, but you could tell there was a big divide between the players and the coaches,” Chen said. “We didn’t agree with how the practices were run and how the games were being coached.”

Although Chen hadn’t originally planned to leave his team before the end of his original contract, the coaches forced his hand. Though he’s still technically under contract with Yulon, Chen began searching around the city for other options.

“At that point I was going to keep my options open because I wasn’t going to commit to coming for sure for my third year or commit to leaving for sure,” Chen said. “I was going to see how the year played out. But, I mean, by the end of the season and being benched for every game, I think I made up my mind I was going to leave after that.”

He has some time to make his next career move, as his contract expires during the first week of July. Until then, Chen plans to enjoy his time off with family and a few mentors before he makes his decision.