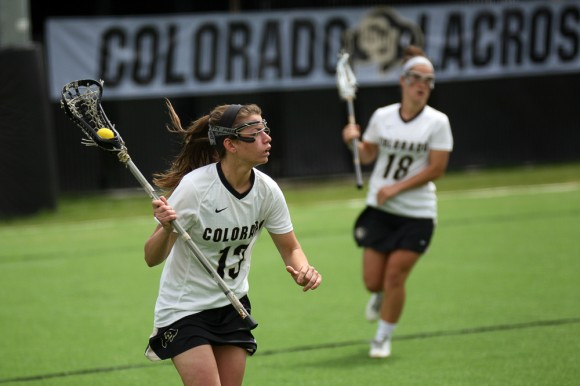 Colorado attacker/midfielder Katie Macleay (13) brings the ball around the net during a women’s lacrosse game in the spring 2014 season. The Buffs are currently 3-1 at home, and looking to increase their wins with games against UC Davis and Stanford this week. (Kai Casey/CU Independent)

With a 5-3 record this season, the Buffaloes are looking to sweep the week ahead of a four game road stretch in California. More importantly, this marks the beginning of conference play in the Mountain Pacific Sports Federation, where CU is 0-1 so far this year.

The UC-Davis program has been around since 1997, and finished at the middle of the pack in the MPSF last year, compiling an 8-8 record, and 3-6 in conference play. The Aggies return their points leader from last year, midfielder Elizabeth Landry, who piled in 48 goals and 18 assists. The senior was an all-MPSF second team pick, the only Davis player to make an all-conference team. This year, Landry has 24 goals and five assists in eight games, leading the team with 29 points.

However, the team has had struggles this year, only notching one win before entering the MPSF season. A common opponent with Colorado is Marquette University, who defeated the Aggies 5-4 in overtime. The Buffaloes defeated the Golden Eagles by a score of 13-5 back in February. Davis also has had trouble on the road, being winless away from Aggie Stadium.

Stanford, on the other hand, is one of the top teams in the conference, finishing second behind the University of Denver in the 2013-2014 campaign. Ranked as high as No. 9 this year, the Cardinals have dropped two games this season, one to No. 15 Penn State University and the other to Cornell University, the latter coming last week.

Stanford shares the offensive scoring load pretty well, having five players on the roster who have scored more than 10 goals so far this season. But the bulk of the points are between sophomore Kelsey Murray and junior Lucy Dikeou, who have 33 goals and 13 assists between them.

But CU has a player of their own who can seemingly score at will, and will no doubt be the subject of double teams over the course of both games. That player is junior Johnna Fusco, whose 24 goals and three assists put her among the most lethal offensive threats in the MPSF. Alongside her is freshman phenom Darby Kiernan, who is close behind with 20 goals and five assists. Fusco, a 2014 All-MPSF first teamer, has scored at least three goals in all but two games this season.

Anchoring the defense is sophomore Paige Soenksen, the reigning MPSF rookie of the year.

The Encinitas, California native has been a solid starter, but did concede some minutes to sophomore Sophia Gambitsky, who played 23 minutes in the Buffaloes 17-7 win over University of Massachusetts-Lowell. But it shouldn’t be much of a concern for CU fans, as Colorado’s only three losses this season have come to Northwestern and Boston College who rank at no. 6 and no. 2 respectively, while Denver was ranked 19th when the Buffaloes lost to them at the opening of the season.