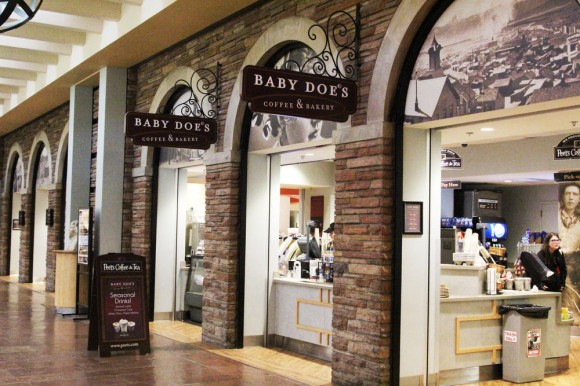 Baby Doe’s Coffee & Bakery under the arches stands as a possible site for a new Starbucks Coffee in the University Memorial Center. (Sarah Meisel/CU Independent).

The UMC may see a Starbuck’s in the near future.

UMC officials are working on a plan that would bring the Seattle-based coffee giant to the UMC.

“We are in the process of seeing if bringing a Starbucks to the UMC is possible, thus this is the plan we are working towards,” Carlos Garcia, the UMC’s executive director, said in an e-mail. “There are several steps that still have to take place before this can become a reality.”

Ben Nguyen, a CUSG legislative council representative, said at the council’s meeting on Thursday that one possibility would put the Starbucks where Baby Doe’s is now, with Baby Doe’s Coffee & Bakery moving to the spot formerly occupied by Coldstone Creamery.

Nguyen also said the UMC might try to obtain the necessary licensing for Starbucks on campus that would give the UMC control over any additional Starbucks shops that come to campus, regardless of placement.

This would be the first Starbucks on campus and would join three other Starbucks shops that border campus.

Currently the east side of campus is the only one that doesn’t have a Starbucks bordering it.

Bringing Starbucks in would come despite scheduled renovations to the UMC have being put on hold for at least three years due to budget constraints, except for renovations to the Glen Miller Ballroom, which will be unveiled next Tuesday.

“We will know more as the semester progresses,” Garcia said.