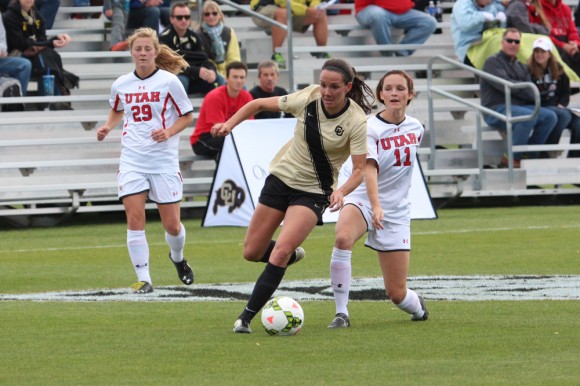 Senior defender Brooke Rice drives forward during the Buffs’ last regular-season game against Utah. This Saturday the women’s soccer team enters the first round of the NCAA Tournament when they play BYU. (Gray Bender/CU Independent)

The West Coast Conference champions have plenty in common with the Buffaloes. They earned their spot based on strong attacking play and good defense. In fact, quite a few of Colorado’s non-conference (and two Pac-12) opponents played BYU as well. The Cougars have defeated the likes of the University of Oregon Ducks, while upsetting then-No.23 Long Beach State University.

Most of those marquee wins have come on the back of sophomore forward Ashley Hatch. The Arizona product leads the team with 18 goals and six assists this season and took home WCC player of the year honors. While BYU’s offense is potent, scoring an average of 2.35 goals per game, their defense is also sturdy as well, only surrendering an average of .9 goals per game and boasting the WCC defensive player of the year, Annie Amos.

At 13-4-2, the Cougars will be a good challenge for the Buffaloes in the tournament’s first round. But what the Buffs lack in flash, they make up for in experience, and the sheer difficulty of the conference they play in. While BYU played two ranked opponents all year, CU has played six, including two ranked in the top five in the country. Facing teams such as UCLA, Stanford University and USC, the Buffaloes learned how to grind out wins and learn from losses. The culmination of those lessons learned in conference play has led to a three-game winning streak heading into the NCAAs. In each of those games, Colorado outscored their opposition by two goals.

The balanced scoring effort is led by sophomore forward Brie Hooks, an All-Pac-12 second team pick, who tops the team with eight goals and six assists. Other offensive leaders include senior captain Darcy Jerman (five goals, four assists) and junior midfielder Kahlia Hogg (four goals, four assists). But the clear key for the Buffs in this match-up will be the defense, anchored by All-Pac-12 second team selection Tori Cooper. Cooper, along with junior goalkeeper Kate Scheele, will have the unenviable task of locking down Hatch and the high-flying BYU offense. But if CU has shown anything this season, it’s that they welcome and accept the challenge time and time again.

The game starts at 1 p.m. at Prentup Field in Boulder, Colorado, and will be aired on Pac-12 Networks. Student admission is $3, while adults will have to pay $7.