Soledad O’Brien: How to (re-)create trust in the media 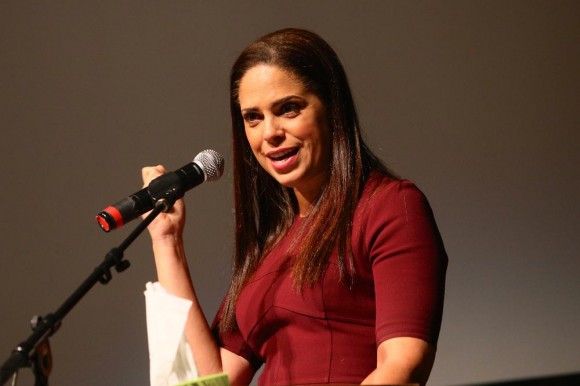 Former CNN anchor and American broadcast journalist Soledad O’Brien delivers a speech titled “Creating Trust: The Media and its Viewer” on Tuesday Nov. 4, 2014, in Macky Auditorium. O’Brien was the fall guest for the University of Colorado’s Distinguished Speakers Board. (Nigel Amstock/CU Independent)

She explained that contemporary news media botches the delivery of the news by giving its viewers quickly produced, inexpensive and oversimplified stories. O’Brien is the host and producer of “Black in America” and “Latino in America,” T.V. documentary series’ on CNN.

“The news is untrustworthy,” O’Brien said. “Americans are increasingly unsure if journalism is protecting or hurting democracy.”

News is now treated as if it is a brief snippet of an event, she said.

O’Brien describes a state of media in which storytelling has become dramatic and fear-based, and journalism has become entertainment. All these things chip away at the credibility of the news organization and lead to a declining audience over time.

The demographic the news cares about guides its manner of coverage. The long-time journalist said as the shift turns to millennials, news content is experiencing a new landscape, and the search for platforms to draw in new audiences is overshadowing the emphasis on telling good stories.

In order to provide a service to its viewers, journalism has to do the work of storytelling by imbuing news with history and context, O’Brien said. In this respect, she was very clear about her hope for the documentary genre to restore credibility to the news.

“If you care about the why or what motivates human beings, then long-form has a way of explaining things that clips never do,” O’Brien said. “To me, building trust in media means building character-centered stories where the journalist’s perspective is kind of irrelevant.”

She also said it means fighting battles behind the camera to ensure that stories are fair and people are respectfully represented.

“You cannot de-humanize people by painting them with a broad brush. People are sick of seeing themselves dehumanized in all sorts of news pieces.”

Successful work as a storyteller is expensive and takes time, O’Brien said. She emphasized that talking about the issues wholly and bringing up the context of people’s lives is the kind of journalism that matters.

“How can you tell an in-depth news story that is authentic, nuanced and novel?” she asked. “What I discovered was inclusion, considering everyone’s story, was essential to expanding our reach to viewers. It’s one of the best ways to build trust in the media.”

Caroline Hughes, a 21-year-old senior on the Distinguished Speakers Board, said, “We wanted to bring in a journalist because we usually get speakers who are artists or scientists. We haven’t had many journalists in the past, and this is our way of broadening our scope and reaching out to more disciplines.”

“I haven’t heard an insider’s perspective on the news industry before, and she was very blunt about her talents,” said Austin Rugh, a 19-year-old sophomore economics and political science major. “She was frank about how the media can find stories and make people care about them, but just doesn’t try to.”

Emily Breidt, a 19-year-old sophomore chemical and biological engineering major, said, “It was so validating to hear someone say ‘yes, I am viewed as an aggressive interviewer because I know what I’m talking about.’ There’s only about 20 percent of women in engineering at CU, and to have someone say that I’m a woman in a man’s world, but I’m good at my job and I know what I’m talking about, it was exhilarating.”