Football preview: Keys to a homecoming victory against UCLA

After a pair of heartbreaking losses against Cal and Oregon State, the University of Colorado appeared ready for a breakthrough in the Pac-12. Last weekend’s trip to the University of Southern California, and the 56-28 rout that ensued at the hands of the Trojans, now have the Buffs looking for answers once again.

“That one just kind of snowballed on us,” said CU head coach Mike MacIntyre during a press conference Tuesday. “Don’t like that to happen. Don’t want that to happen again. I hope I never see it again.”

Colorado’s secondary, which has been a bright spot all year, was exploited by quarterback Cody Kessler and the Trojans. Kessler tied a USC school record, throwing for six touchdowns. If Kessler was a problem for Colorado, they have another thing coming against UCLA this weekend.

Junior quarterback Brett Hundley leads the Bruins, and what he lacks in passing compared to Kessler he makes up in athleticism and speed. Coming into the season, Hundley was a Heisman hopeful and UCLA was widely considered a national championship contender. While both of those dreams have been dashed due to losses against Utah and Oregon, the Bruins are still dangerous.

UCLA has what Colorado consistently can’t handle this season — a strong run game. The Bruins are averaging 200 yards per game on the ground, good for third best in the Pac-12. Hundley is a dual threat at quarterback, ranking second on his team in rushing yards and carries. Most notably, he has four touchdowns on the ground this season. UCLA’s recent zone read amplifies Hundley’s ability to run the ball.

Colorado’s rush defense, which ranks second-to-last in the Pac-12, needs to find a way to contain Hundley if they are going to have any chance at an upset.

“The coaches are putting in different schemes for us,” said defensive lineman Juda Parker. “We’re really working on getting after the quarterback. We know that [Hundley’s] a big dual threat quarterback. He’s hard to take down, but we’re up to the challenge this week.”

But it’s not just Hundley that the Buffs have to worry about. Sophomore running back Paul Perkins burst onto the scene this season for UCLA and leads the team in rushing. Averaging an impressive 6.3 yards per carry, Perkins poses a serious threat to the sieve Colorado’s defensive line has become.

As of today, Perkins is questionable for Saturday’s game after suffering a wrist injury. If he can’t suit up, the Bruins will look to Jordan James. Regardless of who they face, Colorado, who allowed 218 yards on the ground against USC, will have to step up their rush defense.

Luckily for the Buffs, there is a glimmer of hope in this respect. The Bruins offensive line is struggling. Their production on the ground has more to do with UCLA’s talent in the backfield than the play of their line. They have given up 26 sacks through seven games. This means linebacker Addison Gilliam, who leads Colorado in tackles for loss, has a chance to make some big plays behind the line and get pressure on Hundley.

MacIntyre acknowledged the importance of pressuring the quarterback Tuesday morning.

“You’ve got to be able to harass the quarterback,” he said. “That might not always mean that you sack him. But you’re there. You’re around him. You get in his passing lane. You tip a ball. He doesn’t feel comfortable. He feels the people breathing down on him…We’ve got to be able to do a good job with that with [Hundley].”

But the burden of pressuring the quarterback doesn’t just fall on Gillam’s shoulders. It is a job for the entire defensive line.

“[Pass rush] is all about pass protection lanes and working with the other linemen to trap the quarterback,” Parker said. “Really setting up a trap where he has nowhere to escape, and that’s how you sack the quarterback at the college level.“

Parker and the defensive line will have to trap Hundley if they hope to succeed Saturday. If they can, they might be in store for their most productive game this season. This opportunity to face a porous offensive line is exactly the kind of break the Buffs’ struggling defense needs, and while it has been one of Colorado’s biggest weaknesses this year, getting penetration into the backfield may be the key to beating UCLA.

On the other side of the ball, Colorado is up against one of the best defenses they have played all year. While they are not the dominant unit they were projected to be, UCLA still has a stout defense highlighted by their secondary.

UCLA’s secondary could be a problem for wide receiver Nelson Spruce, who is trying to get back on track. Spruce, who still leads the nation in touchdowns, has just 104 yards in the last two games. According to quarterback Sefo Liufau, this is because defenses are making sure Spruce does not beat them over the top. While this may not be the week Spruce returns to his dominant form, Colorado’s receivers should be able to find success underneath him. Extra time in the pocket should give Liufau time to find his other weapons: Shay Fields, Tyler McCulloch and D.D. Goodson.

“A lot of teams right now are making us throw the ball underneath making sure we don’t have anything deep,” Liufau said. “We just have to take what they give us though. If they want to let us dink and dunk down the field, then we have to be able to do that and sustain long drives.”

Colorado has obviously shown vast improvement from last year, but comments like that mean nothing if proof doesn’t show up in the win column.

“You work hard, you want to kind of see a reward for the hard work that is actually tangible,” MacIntyre said. “You want to be able to kind of see that prize or that present…There’s definitely no doubt we want to get [a win] as quick as we can. There’s no doubt about that.”

At the end of the day, Colorado has a tough task this weekend against the Bruins. There’s a reason they were ranked as high as sixth in the country this season. But UCLA has weaknesses. If the Buffs can exploit those weaknesses and take care of the ball, Colorado may finally be able to get the win they so desperately need.

Kickoff is at 12 p.m. MST on Saturday at Folsom Field. 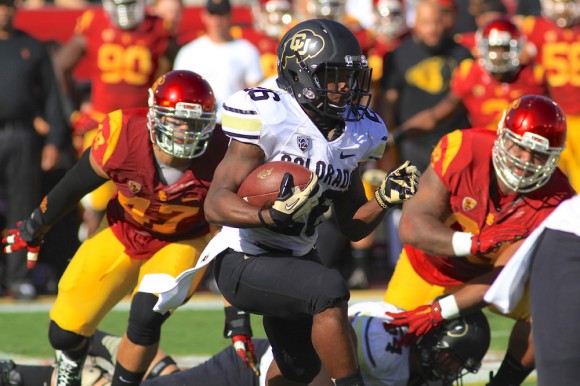 Colorado running back Tony Jones looks for an open seam among Trojan defenders during the first half of play at the Los Angeles Memorial Coliseum on Saturday, Oct. 18. (Nigel Amstock/CU Independent)