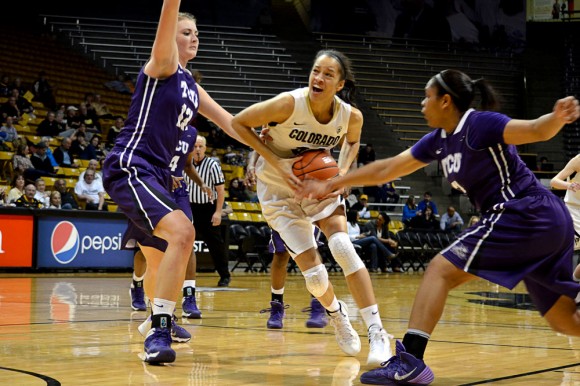 Sweater weather, changing leaves, two-for-one candy sales at King Sooper’s. All of these are signs that basketball season is almost upon us (and perhaps Halloween as well).

As the Colorado women’s basketball team gets ready for the 2014-15 season, so are we at CUIndependent.com. Make sure you check in every Tuesday, when we’ll be keeping you up to speed on Lady Buffs basketball. From weekly recaps and previews to insight and analysis, you’ll be in the loop as head coach Linda Lappe’s squad looks to climb the ranks of the Pac-12. (Don’t miss CUIndependent.com’s weekly men’s basketball column, either.)

Week one: Early obstacle for the Buffs with Roberson’s torn ACL

With only a few days of practice behind them, the Colorado women’s basketball team is already fighting an uphill battle: News broke last week that Colorado’s junior forward Arielle Roberson will miss the entire 2014-15 season after she tore her left ACL during preseason workouts.

“You never like to lose any player,” head coach Linda Lappe said at practice last Wednesday, “and losing Arielle, she has a lot of passion, she’s competitive. Not only does she bring a lot on the floor, but she also has a lot of intangibles that you look for.”

The Buffaloes now face the task of replacing the player who led them in both scoring and rebounds last season. According to Lappe, this point in the season might be the best time to lose a player — if there is one at all — especially one of Roberson’s caliber.

“I guess the positive about losing her early is that there’s a lot of time for younger players to step up,” Lappe said. “There’s a lot of reps young players get to now have in practice.”

With Roberson out for the season and last year’s graduating senior Brittany Wilson gone, the Buffaloes are left with three of last season’s top-5 scorers (in terms of points-per-game): senior forward Jen Reese, senior guard Lexy Kresl and junior forward Jamee Swan. But the Buffs aren’t worried about scoring points this season, even without Roberson’s 12.03 points-per-game average.

“There’s no pressure or anything like that,” Reese said Wednesday. “Coach said that it’s an opportunity for someone else to step up.”

Who will step up?

Reese, who averaged 12.0 points per game last season, believes this Colorado team has “a diverse group where people can score in different ways.”

Kresl, who was fourth on the team last season with 8.1 points per game, doesn’t see the loss of Roberson affecting her own role with the team.

“Really for myself I don’t see too much of an increase being necessary as far as points per game,” Kresl said. “I think that Jamee is going to be more consistent; she’s going to take a lot of the scoring.”

Swan, who also averaged 8.1 points per game last season, could potentially step directly into Roberson’s starting lineup spot. Swan started eight games for Colorado last season and was one of two players to appear in all 34 (along with then-senior Rachel Hargis).

Throughout the off-season, the Buffs have accompanied much of their social media with the hashtag #Aspire2Inspire. Lappe notes this motto will continue to be a motivating factor for the team this season.

“As a women’s basketball program, we feel like one of our responsibilities and jobs is to inspire everybody who ever comes to see us play, and to play inspired every single day no matter if someone’s here or someone’s not here.”

In September, the team released an Aspire2Inspire video, which you can see here.

“We want to make sure that every little girl, everybody who comes to our game, leaves with that feeling of ‘Hey, look what these girls are doing. We can be in that same position someday.’”

For now, Lappe’s Buffaloes will look to move on from the loss of Roberson and keep this season’s aspirations on track.