The Coin Toss: Is offense or defense CU football’s problem? 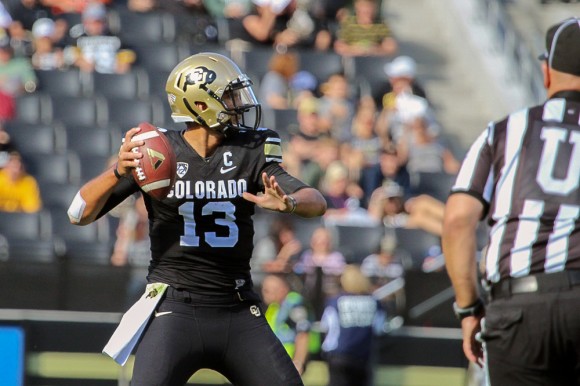 After two tough losses against the University of California and Oregon State University, many Colorado football fans are asking the same question: How are we supposed to win in the Pac-12? CU Independent staff writers Alissa Noe and Tommy Wood compare both sides of the ball in this week’s Coin Toss.

There’s a lot going on on the field that’s hurting the Buffs in the long run. Throughout this entire season, the defense has been CU’s greatest downfall. Just look at the past two games against California and Oregon State. At Cal, the Buffs were leading 28-14 at halftime and it looked like they would finally win a road game — a conference road game.

Halfway through the third quarter, the Golden Bears fought back and matched the score, 28-28. Up until the end of regulation, each team took turns scoring touchdowns until it rounded out at 49-49. Then, after a back-and-forth overtime, the Buffs fell 59-56 in a virtually defenseless game.

During the Oregon State game, the Buffs’ lack of defensive pressure was more evident from the start. About halfway through the first quarter, OSU scored its first touchdown. That one touchdown didn’t seem like that much of a game-changer in the early minutes of the game — until a minute and a half later, when the Beavers scored their second touchdown.

From there on out, the Buffs’ offense cut away at the deficit and even held the lead by halftime, 21-20. During the second half, the Buffs let OSU score 10 unanswered points before they finally responded with a field goal. The Beavers scored again, and the Buffs responded, but it wasn’t enough. The Buffs fell 36-31 in their second straight week of heartbreak and missed opportunities.

As bad as the defense has been, especially in the front seven, Colorado’s biggest problem is the big guys up front on the other side of the ball. Colorado’s offense has Pac-12-level skill-position players, working with an FCS-level offensive line. The line’s struggles cascade down to the rest of the offense.

The Buffs have four good running backs who haven’t had holes to run through all season. Sefo Liufau has been battered, beaten and broken. He rarely has time to go through his progressions and the downfield routes that Colorado loves but can’t develop when Liufau has to get rid of the ball immediately.

Colorado would have converted on one of its final two plays against Oregon State, had the offensive line not subjected Liufau to pressure at the snap. On third down, the line picked up the six-man blitz — but left right end Lavonte Barnett unblocked. He hurried Liufau and forced a low, erratic throw. Barnett ran a stunt and pressured Liufau up the middle in the play after that. He had to make an impossible throw, running to his left. Game over.

While I do agree that the O-line has been a problem, the issue still breaks down to a different aspect of the defense. The screens just aren’t effective enough. The linemen aren’t protecting their quarterback.  Defense is, in essence, protection. A team needs to protect the ball to keep the other team from scoring. If a defense doesn’t protect the ball, and an opponent scores 40 or 50 points on them, it decreases the chance for that team — not necessarily just the Buffs — to cut away at that deficit and take the lead. And, when an offensive line fails to protect their quarterback, he’ll get sacked more often, or, like you said, throw the ball erratically.

We’ve seen that plenty of times this season. The O-line needs to start defending Liufau with more offensive screens if Colorado wants any chance at grabbing that ‘W.’ This becomes infinitely more crucial with the Buffs set to face some of the toughest opponents not only in the Pac-12, but in the nation. Out of Colorado’s remaining six opponents, four are currently ranked in the AP Top 25 Poll: No. 18 UCLA (Oct 25), No. 10 Arizona (Nov 8), No. 12 Oregon (Nov 22) and No. 24 Utah (Nov 29).

More screens is a nice idea, but it isn’t that simple, especially against the gauntlet Colorado will run the rest of the season. Because every opponent can get pressure on Liufau with a four-man rush, they can play conservatively everywhere else on defense.

In most cases, that means man-to-man coverage with two safeties over the top. Note: screens don’t work against man-coverage. Neither does the rest of Colorado’s offense. Oregon State played tight man-coverage on Nelson Spruce for the entire game, and it worked. Liufau didn’t have his most trustworthy safety blanket.

The other problem I noticed against Oregon State, and this is more systemic, is that it seems Liufau isn’t allowed to audible. When the Beavers played a zone defense, they rarely lined a defender up on top of Colorado’s slot receivers. That is an easy check to a quick slant, but Colorado’s offense doesn’t give Liufau the agency to make the change.

That’s all academic, though. Colorado can’t protect its quarterback, and it can’t open running lanes. One builds from the lines out in football. Without passable line play, nothing else matters. 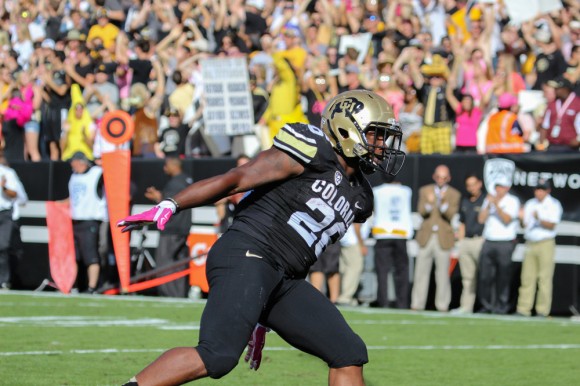 Senior running back Tony Jones celebrates a touchdown that gave CU the lead over Oregon State. The Buffs ultimately fell to OSU, 36-31, and face a challenging second half of the season. (Matt Sisneros/CU Independent)