JEFF the Brotherhood’s rock revival at the Bluebird Theater 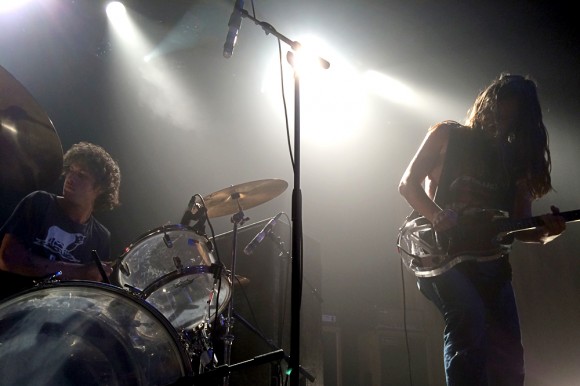 Jamin Orrall, left, and his brother Jake perform as JEFF the Brotherhood at the Bluebird Theater Thursday, Sept. 18, 2014. The brothers formed their band in 2001 and have since made seven studio albums. (Photo Courtesy Henry Moffly)

With Jake on lead guitar and Jamin on drums, the group launched into the set with the stoner rock jam “Melting Place,” the track released on Adult Swim’s free compilation “Garage Swim.”

The group transitioned into “Heavy Krishna” off the album “Heavy Days.” Compared to the recording, the live version was slowed down with an emphasis placed on fleshing out the guitar and drum sections.

“Dig the Classics” is their latest release, set to be issued Sept. 30. The entire EP features covers from groups like the Pixies and Beck.

“Dig the Classics” follows “Hypnotic Nights” as the group’s second release on Warner Brothers Records. This label choice comes as some surprise, seeing that the two brothers own and operate Infinity Cat Recordings along with their father, Robert Orrall, in Nashville, Tenn.

Throughout the show JEFF the Brotherhood represented their Nashville roots. After their initial set they played an encore containing “Sixpack,” a song relating the simplicity of migrating to the nearest body of water and partaking in summer rituals.

Although the show was far from sold out, JEFF the Brotherhood played their garage rock with the same gusto as they might to a packed crowd. They are a lively act not to be missed.