A chat with Dominique Collier 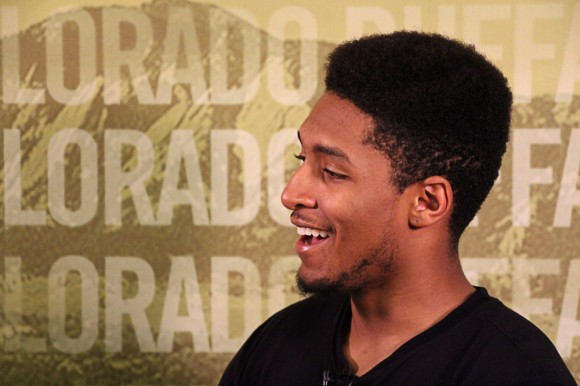 If Dominique Collier needed a reminder that he’s not in high school anymore, he got one his first day on campus in Boulder. That’s when individual workouts began. And they don’t push you at Denver East like they do at Colorado.

It’s 8:45 a.m. and Collier has just finished the first of his two workouts for the day. Securing his commitment was the coup of head coach Tad Boyle’s 2014 recruiting cycle. Collier, a local phenom, was never destined for Colorado — he was an ESPN Top 100 recruit, and entertained an offer from Pac-12 king Arizona.

“It wasn’t really that easy of a choice,” he says. “But my whole senior year, I started to look into it and it became very easy.”

Anticipation of Collier’s arrival softened the blow of losing standout point guard Spencer Dinwiddie to the NBA. Now, the Denver East Angel has landed, and Colorado hopes he will be the team’s next great guard.

With a month to go before his first official practice, he still has work to do — on his shooting, which he emphasized in his summer between high school and college, and in the weight room, where the 178-pound Collier is trying to bulk up to 185 before the season starts.

The former is a necessary adaptation to higher level basketball for a player who knows he isn’t the swiftest athlete.

One thing is for sure: Collier will dominate opponents with his mind, not his body. He is cerebral, with a high basketball I.Q.

“I play smarter than a lot of players, and that got me to where I’m at right now,” he says.

As for the Top-100 hype, Collier doesn’t buy it. You don’t survive in college basketball if you assume you are as good as the masses hope. The game is too fast and the players are too good.

Not all. But three of Collier’s teammates — forwards Josh Scott, Xavier Johnson and Tre’Shaun Fletcher — are. Collier has developed chemistry with them through off-season practices, and they have taken him under their collective wing. Scott, his future pick-and-roll partner, and guards Askia Booker and Xavier Talton have been his biggest mentors.

Collier also has a rapport with his fellow freshman Tory Miller. Collier and Miller, the bruising power forward, now roommates, played AAU ball together and kept in touch throughout their recruitment processes. Collier committed to Colorado first, and he is happy to join the Buffs already familiar with one of his teammates.

He has until Nov. 14 to become familiar with all of them. Collier’s Colorado legacy won’t be settled until long after he takes the court against Drexel. Until then, it’s the daily grind of shooting, working, lifting.