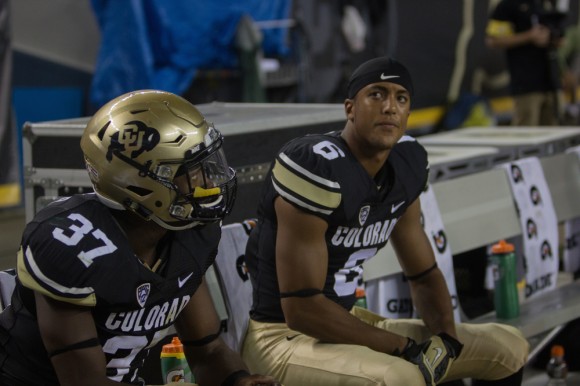 When the University of Colorado Buffaloes were driving for what could’ve been their third score early in the second quarter, it seemed improbable that Colorado State would be able to bounce back and dominate the rest of the game. Sophomore quarterback Sefo Liufau was dropping dimes all over the field, and the CU defense had held the Rams to a mere two yards passing. But after senior kicker Will Oliver missed a 43-yard field goal midway through the second quarter, that’s exactly what happened: Colorado State dominated every facet of the game.

Many variables determined the outcome of the 2014 Rocky Mountain Showdown, but the most powerful were performances by Colorado State running backs Dee Hart and Treyous Jarrells, who ran for 139 and 121 yards, respectively. Hype surrounded Hart, an Alabama transfer, before the game, but Jarrells’ performance came as more of a surprise. How could Colorado give up more than 100 yards to not one, but two players? Whether this CSU performance is more about the Buffs’ ineptitude in stopping the run or the skills of the two CSU running backs remains to be seen. Buffs fans can only pray that their run defense is better than what was showcased on Friday.

“I think a lot of it was missed tackles. Some were in the backfield even a few times,” Colorado head coach Mike MacIntyre said of CU’s defense. This was the main problem for the Buffs: they can run the best defensive scheme in the world, but if they can’t tackle, it doesn’t matter.

Even though the Buffaloes outplayed the Rams for much of the first half, CU will look back at certain moments with regret. A first-and-goal at the two-yard line only resulted in three points, despite three attempted running plays going to junior Christian Powell and freshman Phillip Lindsay. When the Buffs couldn’t find the end zone, they lost their momentum. This Rams goal-line stand was one of many examples of CSU being the more physical team. If Colorado wants to win big games like this in the future, it can’t settle for three points on the goal line.

Before Colorado let the game slide away, there were plenty of positives to go around. Liufau’s performance was commendable. His first half stats were scary good: 15 completions for 21 attempts, 163 yards and a 152.3 rating. The first touchdown of the season for the Buffs came on a beautiful, high-arched throw that landed perfectly in junior wide receiver Nelson Spruce’s hands. Spruce barely had a step on the defender, which made the throw even more impressive. Liufau will need more throws like this to be successful against Pac-12 competition. When he had time to throw and could examine the field, Liufau was at his best.

But one area of concern for the quarterback was the hits he took from the Colorado State defenders. Some involved him not getting out of bounds or sliding quick enough, which is something he will need to learn, especially as a mobile quarterback. After the game, MacIntyre expressed some concern about the contact.

“One of them I’m going to definitely turn in,” he said. “There was a helmet to helmet, and that’s how we saw it.  I’m going to look at it hard on film and see what the situation on that was.”

CU’s wide receiving core performed admirably. Spruce had seven catches for 104 yards and two touchdowns, seemingly in sync with Liufau all game. His second touchdown catch gave the Buffs a 17-7 lead and was one of the highlights of the game.

“That’s just natural out of him,” Liufau said. “That one-handed catch in the end zone, that’s what he does every day. He’s a good playmaker and hopefully we can get him the ball more.”

Freshman Shay Fields tied the school record for a catching debut, cradling eight in his first game as a Buff. Senior D.D. Goodson added an explosive 43-yard catch in the second quarter. Considering Paul Richardson’s absence and the doubts surrounding the wide receiver position coming into the season, surely MacIntyre is pleased with these performances.

Putting this loss into perspective on the season overall can be hard right now, but it doesn’t look good on paper. Colorado has been very adamant that they want to reach a bowl this year, which will require at least six wins. With a loss against a team they beat last year, that makes the road a little steeper. The Buffs won four games last season.

“It hurts,” Spruce said. “It’s one game, it’s a huge game for the state of Colorado and it’s one we aren’t going to forget, but we can’t let it determine our season. So we got to come back to work next week.”

Notes: CU Running back Michael Adkins left the game in the first half with an injured ankle but returned with it taped. Adkins said he was fine after the game. Colorado led the game for 42:21. Nelson Spruce surpassed 100 catches for his career. CU is now 24-2 when scoring first in opening games. The Buffs travel to Foxboro next Saturday in their longest continental road trip ever. They will face the University of Massachusetts at Gillette Stadium, the home of the New England Patriots.

To view a photo gallery from the game, head here. 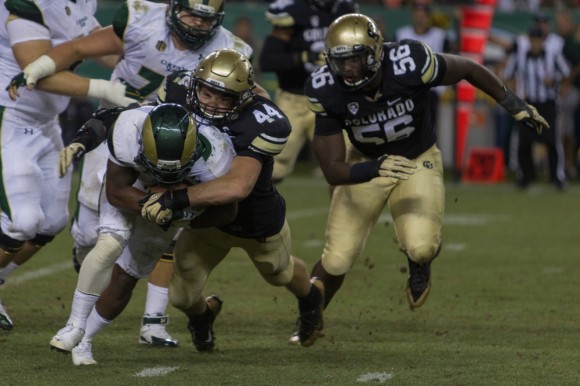