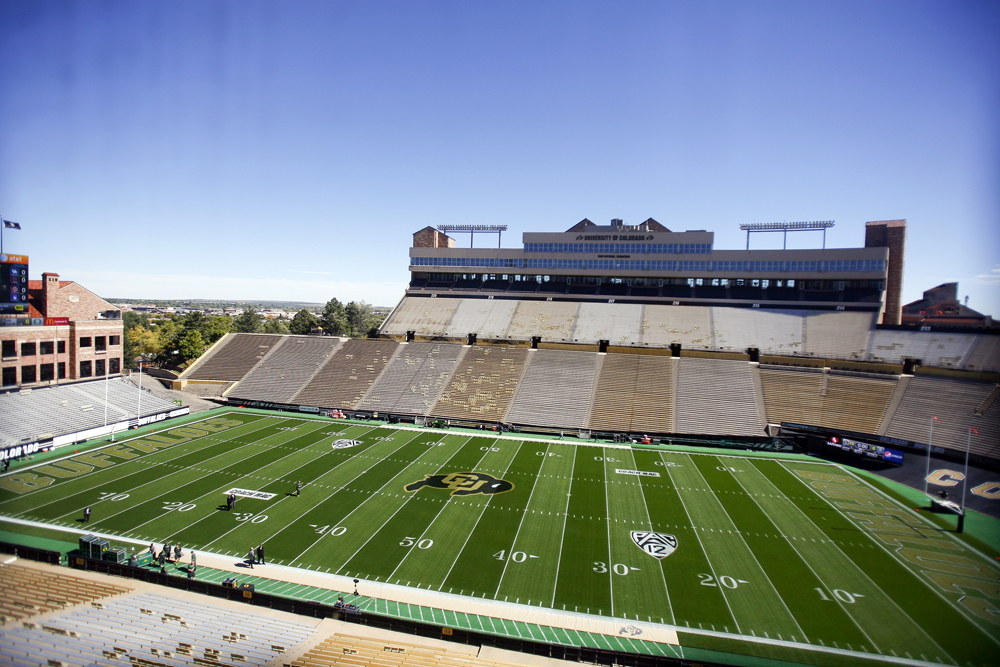 After the University of Colorado’s athletic department acknowledged earlier this month that the price tag for the new facilities currently under construction on campus will be $13 million higher than the originally assessed $143 million, the question still lingers: How did this financial miscalculation happen?

“It’s harder to get labor, so it’s going to cost a little more,” said Rick George, CU’s athletic director. “The soil quality wasn’t what we thought it was, so you have to add new things into that to add the support that you need and the foundation that you need.”

This brings the grand total for the project, which aims to expand and renovate Dal Ward Athletic Center and add a new indoor 300-meter track and rooftop terrace to Folsom Field, to $156 million. Mortenson, a construction company, and Populous, an architecture firm, were hired in February, two months after the Board of Regents approved the expansion.

“Samples of soil were taken after Mortenson-Populous was awarded the contract,” said CU Sports Information Director Curtis Snyder. “They revealed poor soil, which did affect the foundation design. Basically, the support pillars had to go deeper into the ground.”

Still, Snyder did not speak to why the planning commission didn’t test the soil quality before hiring the contractors, possibly allowing a more accurate gauging of costs.

“The electrical work and the earth-moving work are much more expensive [than anticipated],” Hilliard said in an e-mail to the CU Independent. “The market for construction right now is really hot, particularly the specialized labor that you need in different portions of the project.”

A recently released study by the Metro Denver Economic Development Corporation helps in understanding the cost hike: Colorado employment numbers have grown significantly over the last few months. The EDC’s predictions, which expected construction employment rates to rise by 8 percent, have been in sync with the state’s booming economy in recent months. As a result, the demand for — and the costs of — the available labor force increased.

According to Snyder, these unanticipated fluctuations affected the athletic department’s ability to accurately estimate the project’s overall price.

No athletic director in CU history has raised funds of more than $15 million in a single year or received a single gift of more than $5 million. Last month, Rick George did both, meeting a crucial goal: When the regents approved the project in December 2013, they stipulated that the department must raise roughly one third of the costs, or $47.6 million.

The rush to upgrade the facilities and to create conditions that match those of all other Pac-12 teams is part of a larger, continued effort to revive a limping football program as soon as possible.

“We knew the timeframe was aggressive for us to raise the initial piece,” George said. “Every year that goes by, I think the gap [among other programs] widens, and I think now as we begin to build, the gap is closing on us and our competition and on how people view us.”

George emphasized the importance of courting CU alumni, something achieved with the help of high-profile athletic programs. Tad Boyle’s basketball program has enjoyed recent success, with three appearances in the NCAA tournament over the last four years, but the football program aches for a stronger local fan base.

It’s also a numbers game. While basketball has been selling out a good chunk of its games lately, the Coors Events Center can only hold 11,000 Buffs fans. Folsom Field, in comparison, has a maximum capacity of almost 54,000 – but it’s been six years since that many people showed up for a CU football game.

But George says it’s not all about football. He believes both the smaller and the more popular sports programs around campus are all contributing to a recent climb in interest in CU athletics as a whole.

“I think it’s a combination of all of them,” he said. “If you look at what we’ve done as an athletic department in this last year — we have our best overall GPA in our history, a 2.898. We’ve announced an 83% graduation rate. And we had 15 of 17 teams go to the post-season. That in itself is pretty significant.”

Despite costly roadblocks along the way, Colorado athletics shows solid signs of advancement – as does a slowly revamping football program.

“We think it’s important we move [the construction] quickly, we move it in a first-class, professional way, and I think we’re doing that,” George said. “We’re on our way.”