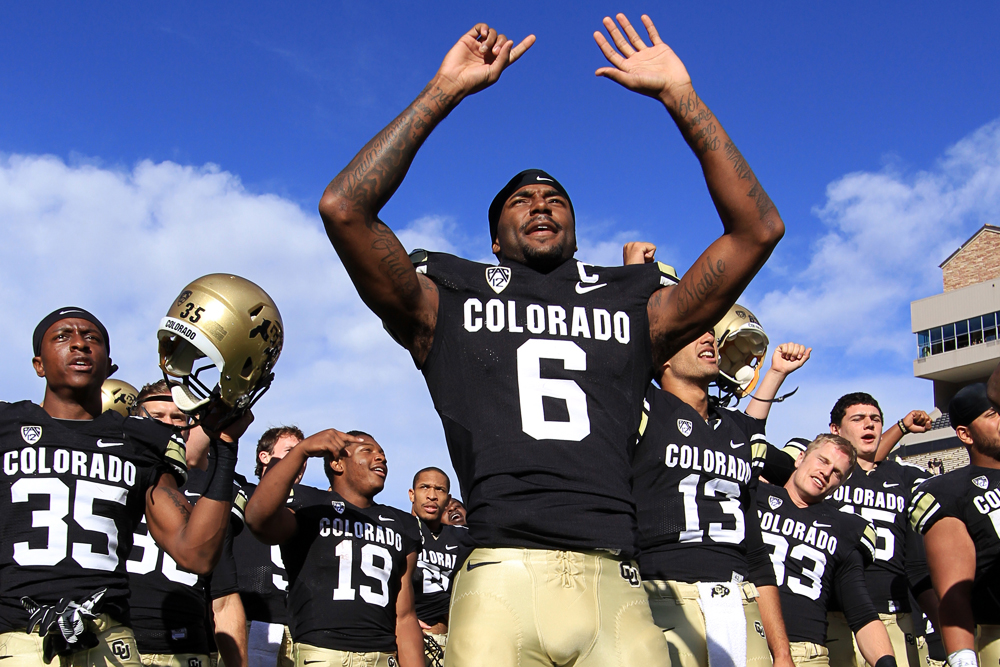 Paul Richardson celebrates after the Buffs’ 43-10 win over Charleston Southern on Oct. 19, 2013. Richardson was selected by the defending-champion Seattle Seahawks in the second round of the NFL Draft. (Nigel Amstock/CU Independent)

It is one thing to become an NFL player and quite another to join the league’s defending champions. Colorado receiver Paul Richardson and the Seattle Seahawks are a perfect match (which I called about a month ago); he fills a glaring hole in their roster and they run a scheme that is equipped to take advantage of his skill set.

Seattle General Manager John Schneider shrewdly played the trade game to put the Seahawks in position to take Richardson. Schneider could have chosen Richardson with the 32nd pick in the first round, but he traded down to 40th, and then 45th overall, landing three low-round picks in the process. By moving down, Schneider got the player he wanted and saved a lot of money — the signing bonus for the 45th pick is about $300,000 less than it is for the 40th pick, and about $1.6 million less than the 32nd pick.

Schneider also filled the Seahawks’ primary position-in-need. Seattle was neither a good nor a prolific passing team last season. In fact, the Seahawks were second-to-last in the NFL in passing attempts. They passed for fewer than 200 yards nine times last year (including the playoffs) and fewer than 100 yards three times. Seattle’s offense struggled mightily at the end of the regular season as opponents stifled their simple passing game.

The Seahawks’ passing attack is old-school. It relies on speedy receivers running vertical routes and deep posts off of play-action. Though Seattle didn’t attempt many passes, it was second in the league in yards per attempt. Late last season, opponents shut the Seahawks’ passing game down by sitting on the deep routes and forcing Seattle to win with short crossing routes. Obviously, the Seahawks still won, but they won despite their offense — they didn’t top 200 passing yards between Week 13 and the Super Bowl.

Seattle’s passing game took another hit when last year’s leading receiver, Golden Tate, signed with the Detroit Lions as a free agent in the offseason. Richardson will fill Tate’s spot, and he should be able to contribute immediately; none of the Seahawks’ other receivers are anything close to a number-one option. Doug Baldwin is a burner, but he’s under six feet tall. Jermaine Kearse has just 25 career catches. Percy Harvin, Seattle’s most talented receiver, has played a full season only once in his career and missed all but two games last year.

Richardson’s speed makes him a perfect fit in Seattle’s deep passing scheme. He is fast enough to outrun any cornerback in the NFL and he’s a sharp route-runner; he has a nice repertoire of little dekes and fakes that help him gain initial separation before he turns on the jets. He’ll also be playing with Russell Wilson, one of the league’s best deep-ball passers.

Richardson will help the Seahawks’ underneath passing game as much as their deep attack. He runs better after the catch than any Seattle receiver other than Harvin. Richardson is elusive in space and turns upfield very quickly after making a catch. Defenses will give him those underneath routes initially; they’ll play off coverage to try to prevent Richardson from beating them deep.

The biggest hurdle Richardson will face during his rookie season is his size and the limitations that come with it. He’s fast and crafty enough to beat a jam before he’s hit, but at only 175 pounds, corners can easily reroute him if they make contact. Richardson isn’t a good run blocker, either. The Seahawks’ offense begins and ends with their power running game, so Richardson will have to bulk up and learn quickly. Because of his struggles blocking, his presence could tip opponents to the play Seattle is running. Essentially, if Richardson is in the game, the Seahawks probably won’t run to his side of the field.

Still, that’s an acceptable trade-off for Seattle. Blocking can be learned and muscle can be added, but speed can’t be defended. The Seahawks drafted a receiver who fills the biggest hole in their roster, and Richardson landed with an organization that develops young players better than any other in the league. Fans of both the Buffs and Denver Broncos may have a rooting dilemma now, but one thing is clear — Richardson and Seattle are a match made in rainy heaven.