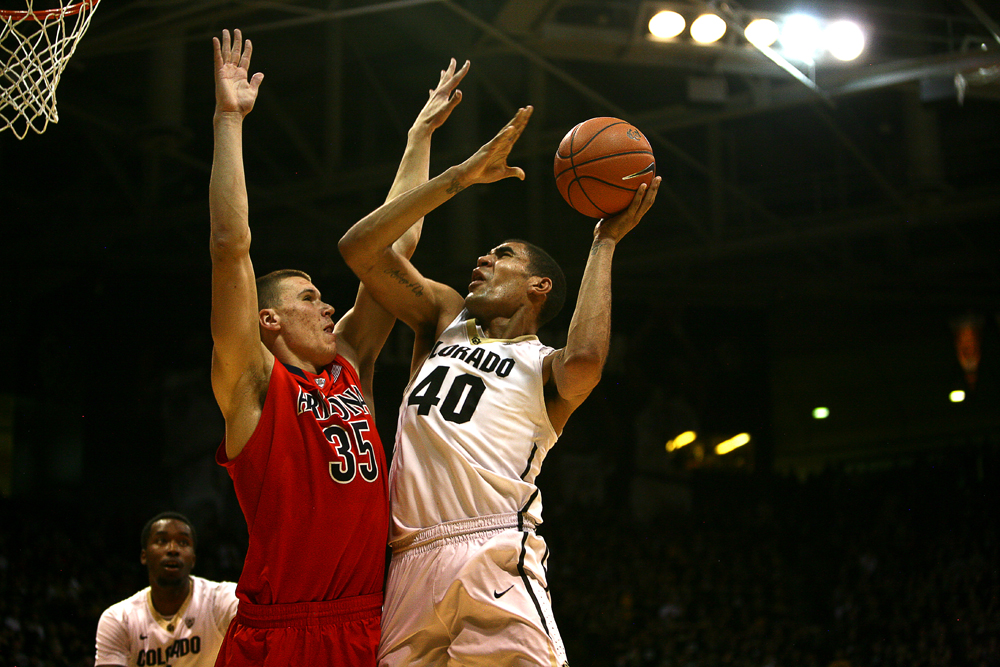 Colorado forward Josh Scott (40) goes up against Arizona’s Kaleb Tarczeski (35) for a layup during the game between the Colorado Buffaloes and the No. 4 Arizona Wildcats at the Coors Events Center, Saturday, Feb. 22, 2014 in Boulder, Colo. (Kai Casey/CU Independent)

The University of Colorado men’s basketball team was close to finishing off their conference play with a win, but a 66-65 overtime loss at the University of California ruined what could have been a sweet ending to the regular season. A victory would have given the Buffs  (21-10, 10-8) the three-seed in the Pac-12 tournament, thanks to a 76-78 Arizona State loss against Oregon State. But instead, CU will have to settle with fifth in the conference.

Going into the final day of the regular season, the Buffs’ position in the conference tournament was up in the air. Coach Tad Boyle’s team could have been seeded as low as sixth and as high as third. At the end of the day, with a wild finish, Colorado and four other teams ended the regular season at 10-8 in the Pac-12.

Against Cal on Saturday, the Buffs had separate leads of six, seven and eight points, but the Golden Bears fought back every time. California guard Justin Cobbs, on his senior night, led the way with 21 points for the home team.

Perhaps Colorado’s best sequence was when sophomore forward Josh Scott blocked a shot with under a minute left in regular time, and junior guard Askia Booker subsequently scored in transition against two defenders. Booker’s layup gave CU a two-point lead, but Cobbs hit two free throws to tie it for California. The Buffs had a chance to seal the victory in the closing seconds of regulation, but sophomore guard Xavier Talton turned the ball over. California then nearly hit a half-court shot as the buzzer sounded.

Colorado led early in overtime after freshman forward Wesley Gordon scored on a spin move in the post at the 4:25 mark. Colorado didn’t relinquish the lead until under a minute remaining. Talton missed an open three-point jumper with eight seconds left that would have put the Buffs up by two. Booker also had a desperation heave near half court as time expired, but it didn’t fall.

Sophomore forward Xavier Johnson led the Buffs offensively in possibly his best game of the season. He gave Colorado 14 of its first 18 points in the first half and finished with 24.  He shot 3-4 on three-pointers and also added six rebounds.

Colorado had a 45-35 rebounding advantage, which in large part kept them in the game. The Buffs had Gordon to thank with his tenacity down low, as he secured 11 boards.

Josh Scott also had another double-double, with 18 rebounds and as many points, despite only scoring two of them in the first half.

A win would have given Colorado a school record 22 regular-season wins, but 21 ties it. CU has also placed fifth in the conference for the fourth consecutive year.

Although a win could have cemented CU’s place in NCAA tournament, the Buffs still have opportunities ahead of them. Colorado will face the University of Southern California in the first round of the Pac-12 Conference tournament Wednesday, March 12. A victory against the Trojans will earn the Buffs a rematch against the fourth-seeded California Golden Bears the next day.