Sometimes University of Colorado head football coach Mike MacIntyre wishes he could “take a magic wand and, ‘pshew’, move forward really fast.” But Coach Mac knows there aren’t any tricks to bringing the Buffaloes back to prominence. Only hard work and patience can do that.

With a year under his belt, MacIntyre is way ahead of coaching trivial things like snap counts and signals. Now he can dive into coaching the specific fundamentals of each position.

The team’s biggest adjustment will be dealing with the loss of wide receiver Paul Richardson, who is entering the NFL draft this May. Perhaps the Buffs’ biggest challenge this offseason is to find somebody — or two people — to fill Richardson’s shoes.

“I think it’ll be more by committee,” MacIntyre said about replacing the Buffs’ star wide receiver. “But I think we’ll be able to get a lot of the same results, just maybe differently instead of it always being number six.”

MacInytre is confident that the current players will help fill Richardson’s void, but he is also excited about some freshmen receivers coming in as well.

“I think we have some good receivers that are here now, and we signed some guys to come,” MacIntyre said. “Of course with [incoming freshmen wide receivers] Lee Walker and Shay Fields, we feel like they have a lot of good speed, very similar to Paul Richardson.”

MacIntyre’s second season gave him more time to focus on recruiting. The CU recruiting class, which was fully announced Feb. 5, won’t rank very high in any national polls. But MacIntyre thinks he has found some gems.

Evan White is a local recruit whose high school career was highlighted by two interceptions against state-champion Valor Christian High School in the Colorado 5A football playoffs. White is a big-bodied safety who should help Colorado slow down some of the high-powered offenses in the Pac-12.

“He can play physical, play in space, he has range, he can cover and he can run,” MacIntyre said of White. “I’m really excited about him, and I think he’s got a chance to play for us as a freshman, because he’s already big in stature.”

MacIntyre also spoke of incoming recruit Dylan Keeney, a 6-foot, 6-inch tight end that should be able to stretch the field. He might even be able to draw double teams to take pressure off of other receivers.

“He can beat safeties; they’re going to have to know where he is,” MacIntyre said. “I think he’s another guy that has a chance to be able to help us this fall.” 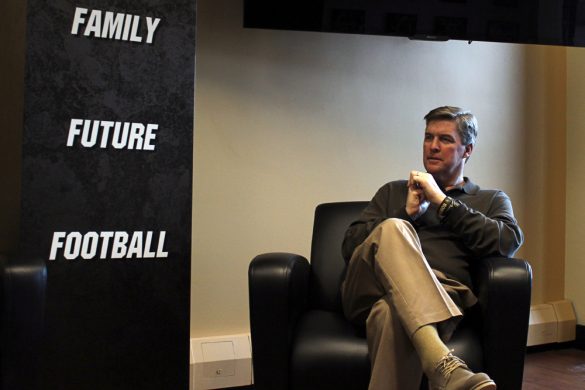 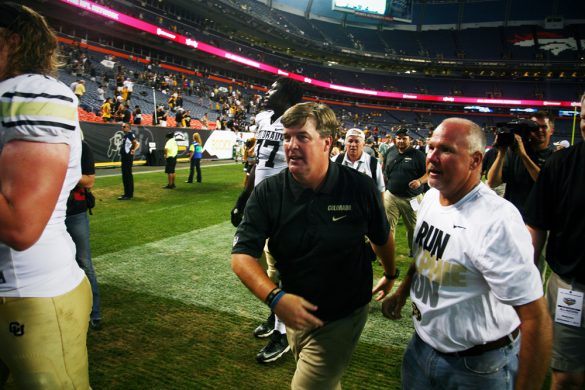 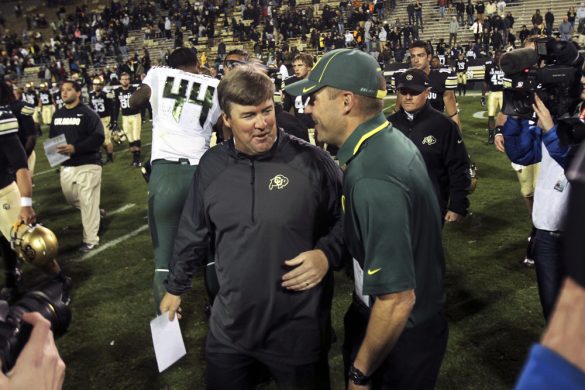 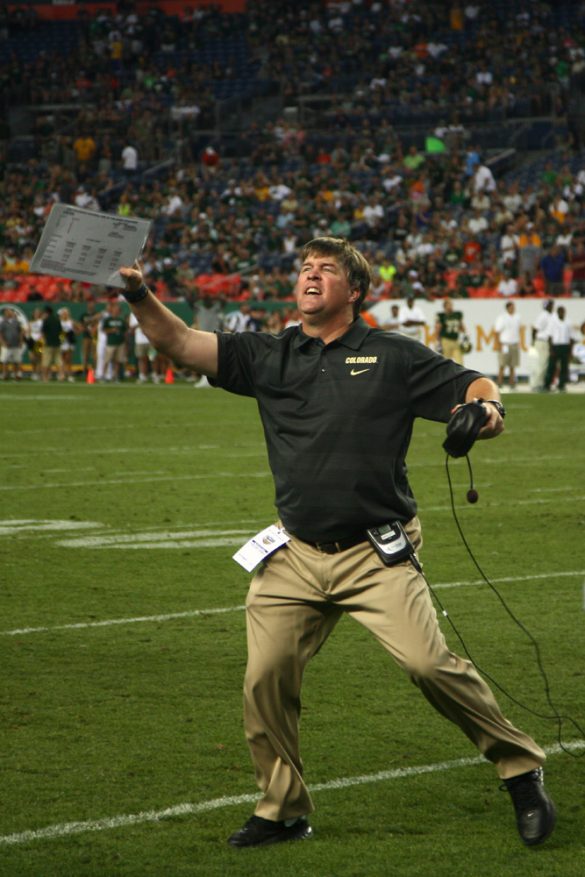 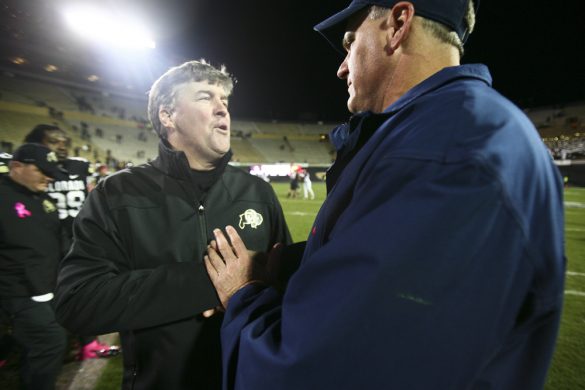 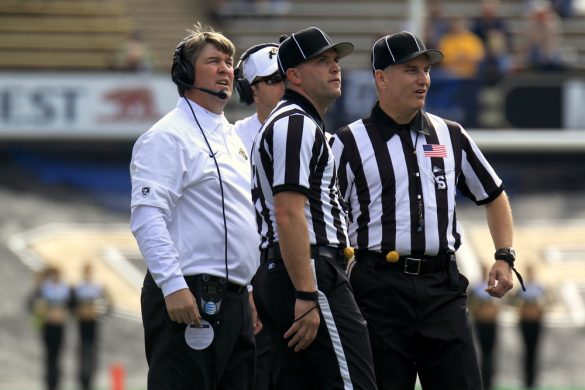 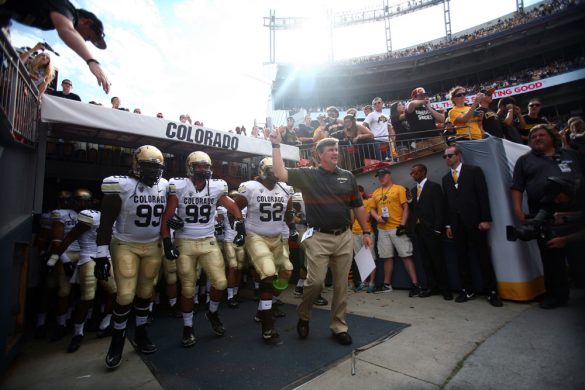 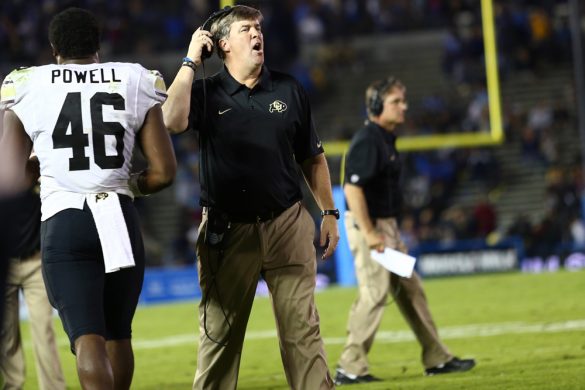 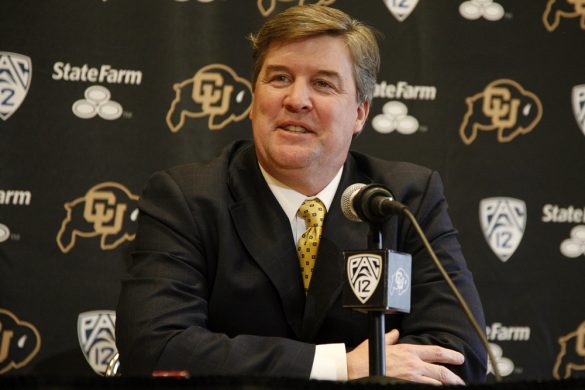 MacIntyre focused on recruiting high-character guys in this class. Regis defensive end Terran Hasselbach suffered injuries in a car accident that prevented him from playing on varsity for one year, but that didn’t stop him from recording 11 sacks and 78 total tackles in his senior season. Players like Hasselbach give MacIntyre confidence that his players are in for the long haul.

At quarterback, sophomore Sefo Liufau and junior Jordan Gehrke will be competing for the starting job in the spring. Cade Aspay is also committed to playing quarterback and adding depth to third string for the Buffs. MacIntyre said he feels the Buffs are in good shape at the quarterback spot and hopes throwing accuracy will improve with a greater understanding of the offense.

MacIntyre said he learned from his time at San Jose State University that wins aren’t always the absolute mark of improvement. There is more to a team than its record. The year before his Spartans won 10 games and were ranked in the BCS for the first time in school history, he could see the improvement in his team despite only earning five wins.

“I feel like that year we went 5-7, we could have won a few more games, and we lost them,” MacIntyre said. “The year before we were getting blown out some. So you can get beat 45-10 and you can lose 28-27 and you still lost, but you showed a lot of improvement. I think [Colorado is] on that path.”

Colorado athletic director Rick George has vocalized high expectations for the CU football team. He thinks the Buffs should be playing in bowl games in 2014 and 2015 and expects CU to compete for the Pac-12 championship in 2016.

MacIntyre improved Colorado’s win total from one to four in his first season. A bowl appearance would require at least six victories; a Pac-12 conference championship would be in the double-digits range. MacIntyre has lead San Jose State on a similar path, and Buffs fans are hoping he can keep the team trending upward and eventually reach the glory that has eluded the program for far too long.

CU football practices start March 7, and the spring game is set for April 12.