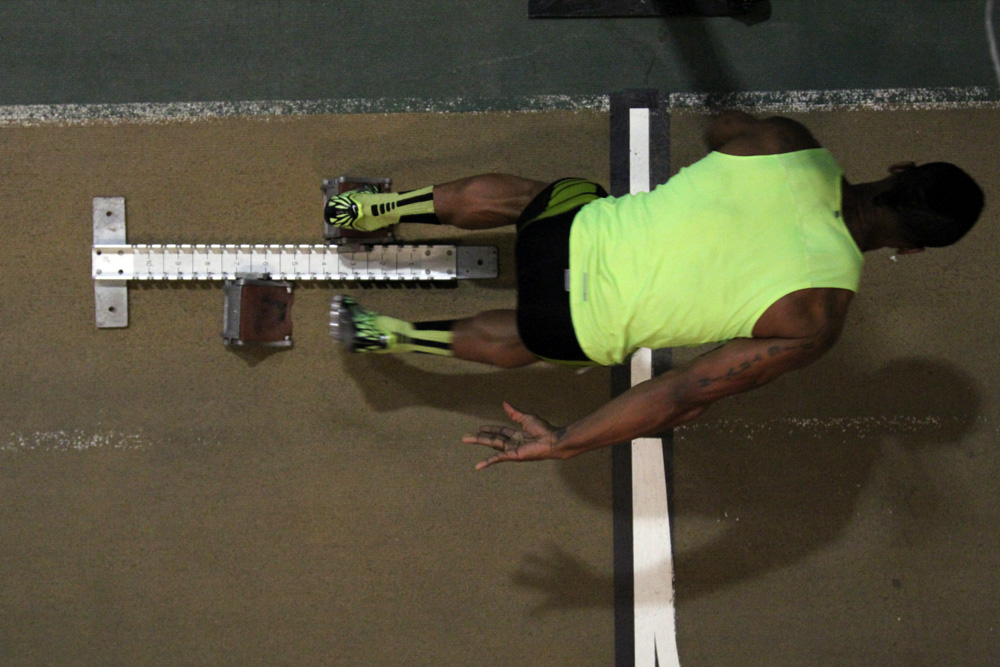 A runner takes off for the 200-meter dash Saturday, Jan. 18 at the Potts Indoor Invitational in Balch Fieldhouse. (Matt Sisneros/CU Independent)

The University of Colorado’s track and field program is now in full swing and the Buffaloes are bringing home a Division I Men’s title from the Air Force Academy this weekend. Colorado scored 148 points and boasted four top finishes in the 60-meter dash, 200-meter dash, mile-run and 3,000-meter run.

CU’s top sprinter of the weekend, senior Shaw Gifford, won the men’s 60-meter dash with a time of 6.75 seconds, barely edging out Colorado State’s Marcus Harris, who posted a time of 6.76. Gifford also conquered the 200-meter dash, beating Colorado freshman Jaylyn Mars with a time of 21.48. Mars ran a 21.86 and contributed an additional eight points to Gifford’s 10 on the event.

The Buffaloes shone brightly in the men’s distance events, where many faces from cross country’s national championship team of 2013 are present. Junior Morgan Pearson took first place in the men’s mile, clocking in at 4 minutes, 16.40 seconds. Just behind Pearson was freshman Zach Perrin at 4:16.71.

The most impressive win of the day came out of the 3,000-meter race. Senior Joe Bosshard blew away the rest of the field with a first-place time of 8:35.66. Bosshard was over 14 seconds ahead of the next finisher, fellow Buff sophomore Pierce Murphy (8:50.56). He is in his final season of eligibility and ends his collegiate career this spring after a two-year hiatus from competition due to injury.

But between the men and women, a common theme was a lack of points from field events. On the men’s side, juior Mark Jones pulled off a fourth place finish in the high jump, clearing 2.09 meters (6 feet, 10.25 inches). Senior Jason DeWitt of Colorado also finished fourth overall with 5,021 points in the heptathlon, consisting of the 60-meter dash, long jump, shot put, high jump, 60-meter hurdles, pole vault and 1,000-yard run.

Sophomore Brittany Lewis contributed a fifth place finish to the women’s team in the indoor pentathlon. Lewis scored 3,613 points overall. The pentathlon includes the same events as the heptathlon, but leaves out the 60-meter hurdles and substitutes the 1000-yard run with an 800-meter race.

Despite hurting for points in the field events, the Buffaloes managed to clinch a third-place finish on the women’s side overall, scoring a total of 89 points.

The bulk of women’s points came out of the mile, where CU runners comprised of the top six Division I finishers. Freshman Melanie Nun headed up the pack at 5:06.14, and teammate Lucy May, also a freshman, finished sixth at 5:21.16. Three runners finished ahead of Nun, but two were running unattached for the Boulder Track Club and Brooks Running Co. The third scored points for Division II Metro State University.

Finally, junior Jenny DeSouchet took home a second place honor in the 800, finishing at 2:17.20. It was DeSouchet’s first track meet since she became a Buffalo.

Next weekend, the Buffs travel to Seattle for the University of Washington Invitational. The meet will begin Friday afternoon and continues through Saturday, Feb. 1.