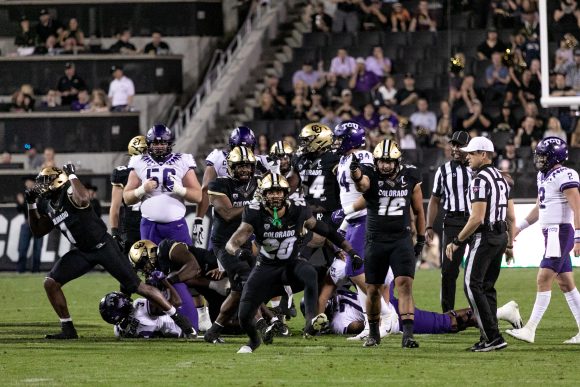 After a winless first three weeks of the season, the Buffaloes look to get their season back on track when conference play starts this week. The UCLA Bruins will play at Folsom Field this Saturday and stand in the way of the Buffaloes’ first win. The Bruins favored by more than three touchdowns will test Colorado’s consistency on the field. However, with the quarterback situation in flux, generating consistency might be tricky for the Buffaloes’ offense and the team as a whole.

The 2022 football season has been less than ideal for the Buffaloes. The Buffs have had some intense struggles on both sides of the ball, resulting in CU being ranked as the third worst Division 1 football team in the NCAA.

“We have not come close to meeting our expectations this season, and we own that,” said Colorado Athletic Director Rick George in a press release on Sunday.

The Buffaloes have had trouble putting points on the board in the last three weeks, scoring only 30 points combined in their first three games. The limited offensive production has led to head coach Karl Dorrell not being confident enough to decide what quarterback should be in the game between sophomores Brendon Lewis and J.T. Shrout. Both quarterbacks have been splitting play time in all three games, making it very difficult to get into a rhythm and a chance to get comfortable in the game. Despite this, Dorrell looks like he will complicate things further by throwing a third quarterback into the mix.

During Colorado’s blowout loss to Minnesota, freshman Owen McCown looked very sharp in his playtime last week. In his limited snaps, he threw four completions for 52 yards. Many CU fans demanded that McCown should be getting the first team reps at quarterback in practice this week, and has been. However, Dorrell has also split the first-team reps with the two other quarterbacks. Given this development in practice, Dorrell is signaling that he will experiment with all three quarterbacks to see what he can get going during this week’s game against UCLA.

“(Owen) played well. I was very encouraged by that,” said Dorrell in his presser on Monday. “We are going to turn over any stone at this quarterback position and try to figure out what’s best for us moving forward.”

Dorrell using all three quarterbacks throughout the game versus the Bruins may help Colorado get an offensive spark they desperately need. However, this seems unlikely given how Colorado has already done when splitting play time between quarterbacks this season. This split quarterback situation has not worked well for the Buffaloes so far. Having two quarterbacks split snaps have hindered their ability to find consistency and get comfortable inside the game, and Dorrell has even agreed with this.

“It wasn’t a very effective way because (Lewis and Shrout) both couldn’t engineer the consistency that we are looking for,” he said.

Will Dorrell’s decision to play three quarterbacks help Colorado find the spark they need against UCLA, or will the addition of a third quarterback hinder their ability to find consistency even further? This question will be answered when the Buffaloes take on UCLA at Folsom Field at noon this Saturday, Sept. 21.