Chancellor promotes unity and discourse in State of the Campus address 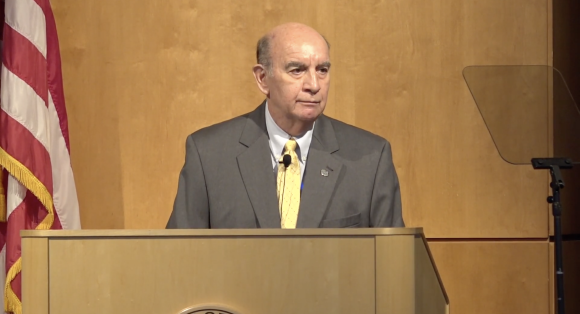 Chancellor DiStefano delivers the State of the Campus address on Tuesday, Sept. 14, 2022. (Courtesy of the University of Colorado Boulder)

University of Colorado Boulder Chancellor Phillip DiStefano had a simple message for the hundreds of viewers at his 2022 State of the Campus address; he thinks colleges and universities should band together to instill democratic ideals among generations of young people.

“About 56% of US adults say they are not satisfied with the way democracy is working in America,” DiStefano said, citing a 2021 survey by the Pew Research Center. “Colleges and universities must change this course.”

On Tuesday morning, Chancellor DiStefano addressed a crowd of CU alumni, students and faculty to spread his message that CU Boulder has a responsibility to “uphold democracy.”

He focused parts of his speech on the importance of intellectual discourse among students as a means of supporting democracy, sharing that a colleague from the past once told him that, “a university should be a house of conflict, where different perspectives are shared and debated in pursuit of greater understanding and knowledge.”

Chancellor DiStefano’s focus on free speech during the address comes just months after the university was thrown into controversy over the dismissal of John Eastman,  a visiting professor from Chapman University who spoke in Washington D.C. just before the capitol insurrection attempt. Eastman is involved in a $1.8 million lawsuit with the university, claiming that the school violated his first-amendment freedom of speech after he promoted false conspiracy theories surrounding the 2020 election results.

“Each of us has a responsibility and a role to play at CU Boulder,” stated DiStefano. “We must rededicate ourselves to supporting and sustaining democracy every day.”

DiStefano segued into another key focus of the address, service towards the public good. The chancellor took a brief moment to chronicle the public achievements of current Buffs, as well as alumni and the institution as a whole. Highlighted were the $634 billion of research funding for global and local communities, the university’s claim to more than a dozen Colorado state government members and several others elected to national government positions.

“I’m pleased to report that the state of our campus remains strong,” DiStefano said.  Throughout his address, the chancellor attributed this strength to the influence of democracy on members of the Boulder community.  “I’m proud to say that in 2020, the democracy challenge awarded CU Boulder platinum statues for achieving an 80-89% voting rate among eligible students,” he stated.

The chancellor concluded his address by calling on the audience to get involved in the democratic process.

Jessi is in her first year as a journalism major at CU Boulder. She enjoys covering politics as well as social issues affecting the Boulder community. When she is not writing, she can be found exploring new cities, listening to music, and surrounded by her friends and boyfriend.