Buffs drop back and forth matchup against No. 16 USC 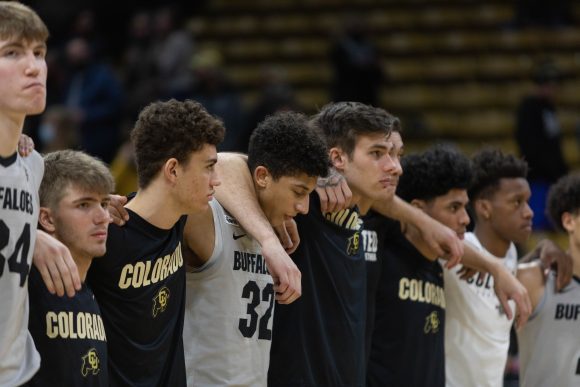 The Buffaloes hang their heads after falling to USC 58-61 at the CU Events Center. Jan. 20, 2022. (Kara Wagenknecht/CU Independent)

The Colorado Buffaloes (12-4, 4-2 Pac-12) were narrowly defeated by the No. 16 USC Trojans (14-2, 4-2 Pac-12) 61-58 in Thursday night’s contest. The Buffs entered the game looking for their first win against an AP Top 25 opponent this season after losing their first three of those opportunities and had a fourth, against Kansas on Dec. 21, canceled.

The Buffs began the game slowly, starting 3-12 from the field. This allowed USC to reach a six-point lead with just under 4 minutes until halftime. The Buff’s free throw shooting was what kept them in the game, and they were able to find some energy to tie the game at 25 apiece going into the break.

Sophomore guard Nique Clifford got his first career start and finished the game with five points and seven rebounds. He also had one of the most exciting plays of the game, an impressive poster dunk to bring the Buffs within four points of the Trojans with less than 12 minutes to go.

“It’s a cool opportunity, but definitely didn’t get the outcome we wanted,” said Clifford. “I was just treating it like another game. It’s unfortunate, we got to just come back and bounce back on Saturday.”

Senior forward Evan Battey made some difficult shots in clutch situations and finished the game with ten points, eight rebounds, and three assists. During the postgame, he expressed his frustrations.

“Yeah, points in the paint 38 to 12, outrebounded by 15, 16 turnovers,” said Battey. “There’s no hidden answer, it’s right there. We didn’t do the things necessary that are required to win.”

The Buffs struggled to defend USC Forward Chevez Goodwin who finished with fourteen points and 18 rebounds, seven of which were offensive rebounds. 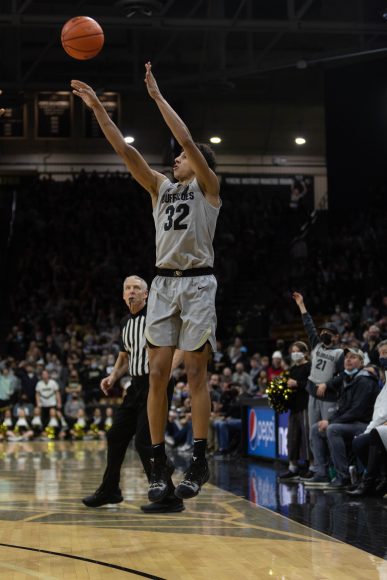 Sophomore guard Nique Clifford drills a three-pointer during the second half at the CU Events Center. Jan. 20, 2022. (Kara Wagenknecht/CU Independent)

“I don’t know how we were in the game, quite frankly,” said head coach Tad Boyle. “18 offensive rebounds, when we want that number to be 6 or less.”

The Buff’s inability to make shots was a trend the entire game. They finished a miserable 16-51 from the field but shot 7-15 from range which is higher than their season average. Free throw shooting helped the game stay close, as the Buffs went 19-25 from the line.

“It’s frustrating,” said Boyle. “This team, offensively, and it goes back to our Costa Rica trip in August, finishing at the rim, finishing plays on offense is something that we have struggled with.”

Even with trouble scoring, Colorado was in the lead 52-50 with only 3:58 left in the game.

An and-one opportunity for the Trojans put them back on top 53-52 with 3:40 left. The Buffs had several possessions in the last 90 seconds where they were only down one basket, but all came up empty. Two missed layups and a turnover ended any hope for the Buff’s comeback.

“My job as a coach is to make sure we’re getting a great shot for our team,” said Boyle. “That’s all I can do. Now, if we’re not getting great shots, like that last possession we got an absolutely awful shot, That’s on me. I have got to do a better job. .”

The Colorado Buffaloes have a quick turnaround as they will play No. 9 UCLA on Saturday at 7 PM MST at the CU Events Center.