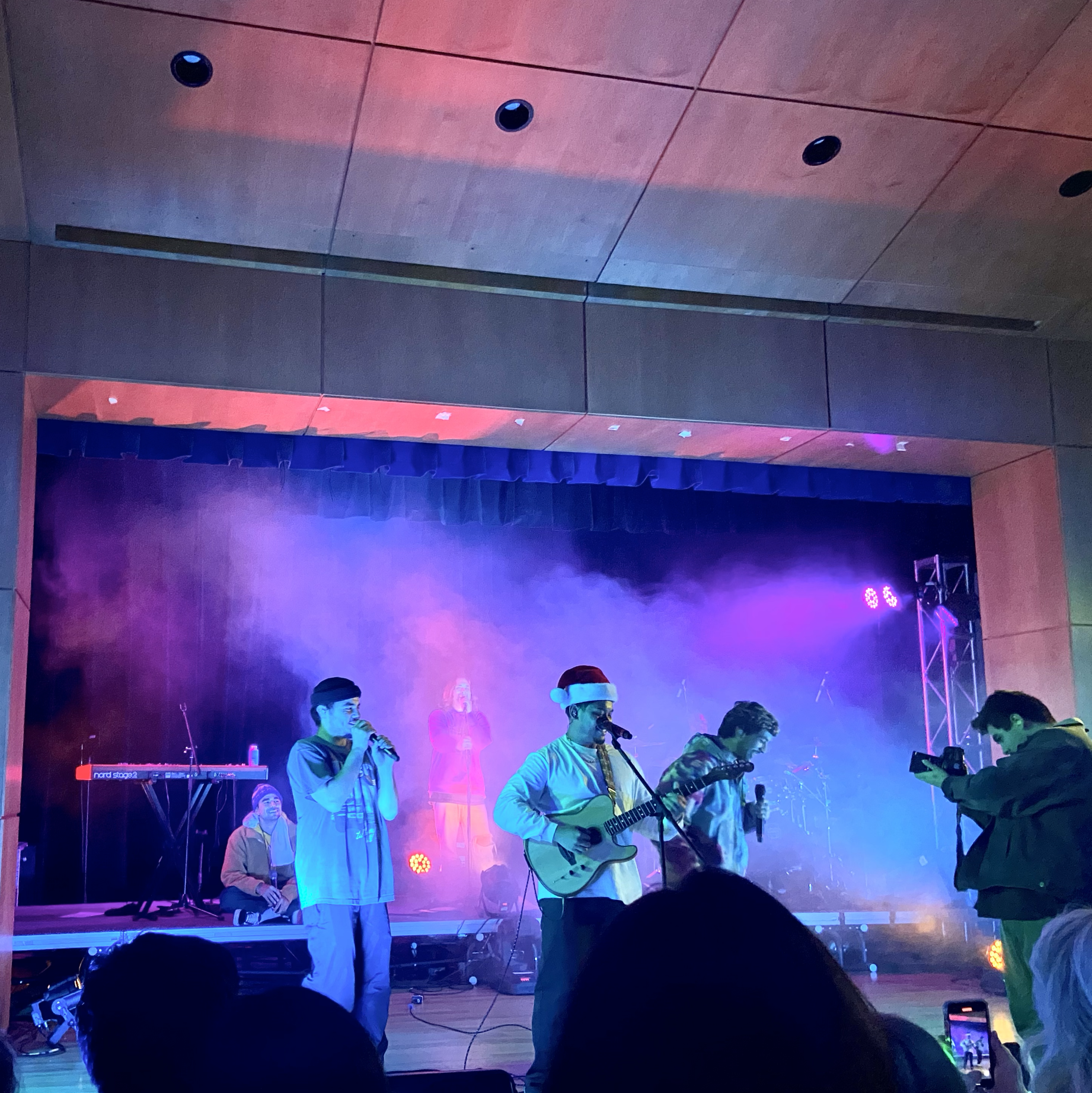 Venturing out to a frigid CU Boulder campus, Peach Tree Rascals managed to bring a flash of warmth and positivity to the university’s Glenn Miller Ballroom to cap off the semester.

Originally slated to come to campus for the annual homecoming concert, Peach Tree Rascals’ performance was instead moved to Friday, Dec. 9, the day before final exam week commenced. Perhaps due to the combination of the concert’s timing and general unfamiliarity with the burgeoning indie pop band, Glenn Miller Ballroom drew a modest and relatively tame crowd. However, that didn’t stop Peach Tree Rascals from giving a rousing performance and putting their hearts on their sleeves, something that seems consistent with their brand.

Hailing from San Jose, CA, Peach Tree Rascals is comprised of Dominic Pizano, Issac Pech, Tarrek Abdel-Khaliq, Joseph Barros and Jorge Olazaba. Known for their breezy, charmingly innocent tunes about young love, it’s no wonder they’ve seen massive success on platforms like TikTok throughout the pandemic. However, what elevates them above the myriad of other artists honing in on that strain of infectiously clean and sunny indie pop is their positive stage presence.

From the second they took the stage, the band, which comprises five high school pals, exuded an undeniable sense of chemistry. Between their opening riffs of tracks like “OOZ” and “I’m Sorry,” the band smiled at one another as if they couldn’t contain their excitement about playing in front of a live audience again — later on, Abdel-Khaliq remarked that this was their first ever time coming to Colorado. Between the groovy guitar riffs and bass lines, song brought a unique blend of R&B, funk and indie rock, prompting the subdued crowd to sway gently to the melodies.

During the middle section, the band jumped into more downtrodden songs, highlighted by a memorable performance of “Plus.” The lights dimmed almost completely to cast focus on Pizano, who took center stage and rapped, “Sometimes, I’m down on my self / Sometimes, I think they can’t tell / Sometimes, I’m neglecting my health.” In these moments, the band showcased their knack for heartfelt tunes.

Despite the captivating nature of their performance, both the danceable hits and their slower ones, the members of Peach Tree Rascals never relinquished from an aire of relaxation. As members of the band took turns performing solo verses in various songs, the rest would casually sit on the stage’s ledge, joking with one another and the concert’s photographers, or gesturing their appreciation warmly at the small number of students who made it the front of the crowd and seemed to belt every lyric alongside the band. At one point, Pizano even donned a Santa Claus hat tossed to him and wore it for the rest of the night — even throughout their most serious songs.

After a 45-minute set and departure from the stage, the band beamed with pride as they returned for an encore, as if this final song was what they were waiting for the entire set. They jumped into an upbeat rendition of “Mariposa,” by far their most well-known song due to its success on TikTok. And from the newfound energy of the crowd, it was easily their most well-beloved. “Ain’t never gonna let ya go / Got my heart Nascar racing / Shine ain’t ever fading,” the band members belted together, rising above the thumping drum beat and managing to get nearly every audience member to clap along in unison.

After the show, Abdel-Khaliq spent nearly half an hour in the ballroom’s lobby, chatting with students and taking time for photos. He remarked that the band was gearing up for their forthcoming debut tour, their first real chance of reaching a massive audience through live performance.

Between the renewal of live concerts nationwide and the band’s steadily growing catalogue of surefire hits, the groundwork is laid for Peach Tree Rascals to be the next big indie pop sensation.