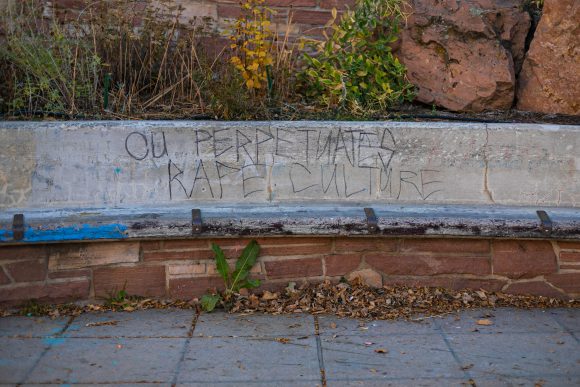 The words “CU perpetuates rape culture,” are written in chalk on the side of the Broadway and University Hill underpass on Thursday, November 4th, 2021. (Io Hartman/CU Independent)

Boulder Police are investigating two separate cases of sexual assault that happened at a fraternity house in Boulder. Police have not said which fraternity is being investigated. They have said the house is located in the 1000 block of 12th street.

Though police have not named which fraternity is responsible, students who spoke with local television news crews say both cases occurred at the Pi Kappa Alpha house. The first case occurred early morning Oct. 24, and the second occurred on Oct. 31.

“The Department takes all such reports seriously and are unable to release further details at this time,” Boulder Police said in a statement.

Boulder Police encourage anyone with information to call 303-441-3333.

In response to the allegations, CU students have organized a march to the Pi Kappa Alpha house Friday Nov. 5. The march will meet at the underpass between Kittredge Center and Main Street and will depart for PKE at 5:30p.m.

The flyer shared on Barstoolbuffs’ Instagram calls on students to “march against rape culture” and to “hold PIKE accountable.” Though Barstoolbuffs did not organize the march, their story post has reached a wide audience.

“The flyer on our story got 1k+ shares already so we’re hoping for a big turnout,” the Barstoolbuffs said in an Instagram message.

The university has released a statement on Instagram asking students to report cases of misconduct to the office of institutional equity and compliance. They can be contacted via email at cureport@colorado.edu or contacted by phone at 303-492-2127. Their website is located here.

The same Instagram story post also asked anyone with information relating to crimes to report it to university police.