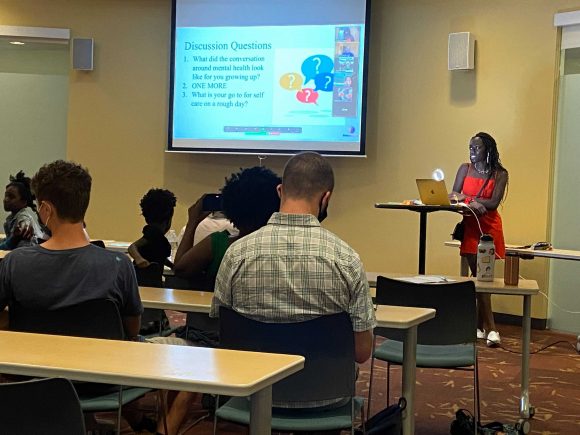 On Thursday, Sept. 9, guests entered a small and intimate conference room at the Center for Community building that was filled with Evangelyne Eliason’s closest friends, family and colleagues. Here, she gave those in attendance a preview of a five-day suicide prevention initiative that she is leading. The event is part of the University of Colorado student government representative’s campaign platform, called Project K.I.N.D, which stands for Kindness, Initiative, Negotiation, and Diversity.

The full program will take place in October, with an opening and closing session where student panelists tell their raw and real stories about their mental health and experiences with the effects of suicide to kick off Project K.I.N.D. In the following days, there will be a 5k fundraiser and the ability for students to show their own radical acts of kindness.

During her presentation, Eliason said that she wants to make kindness more applicable to people as she “believes that kindness is the foundation of every aspect of life.”

Eliason was part of the Resident Hall Association here at CU Boulder and was hosting different events for her community in 2019. She said that she wanted to do something that embodied her vision, wishing to start an organization that was intertwined with kindness and empathy. Though COVID-19 briefly halted her progress of this project, she came out with a clearer vision in the end. She said that she wishes to “show radical kindness” which is the foundation behind this suicide prevention campaign.

“Growing up for many people, there were not a lot of points made to discuss mental health in many different parts of society. However, a lot of people have begun to talk about mental health and its impacts on individuals more frequently,” Eliason said.

After Eliason finished her presentation, she led a discussion where anybody who wished to share their views on growing up talking about mental health could. This two-part program modeled what she plans to bring to campus in October.

Through Project Kind, she wants to take initiative to find student groups going through tough mental health situations, as she said that individuals often feel shame in telling someone about what they are experiencing.

“This is a smart way to get students talking to others if they so wish about what they may be going through,” she said.

For those interested in participating in Project K.I.N.D, there are several ways to do so: you can sign up to be a conference panelist wherever you are in the USA, be a 5K runner or a volunteer, coordinate radical acts of kindness through different student groups, or donate to Project Kind’s launch funds.

CU Boulder freshmen adjust to life on campus under...