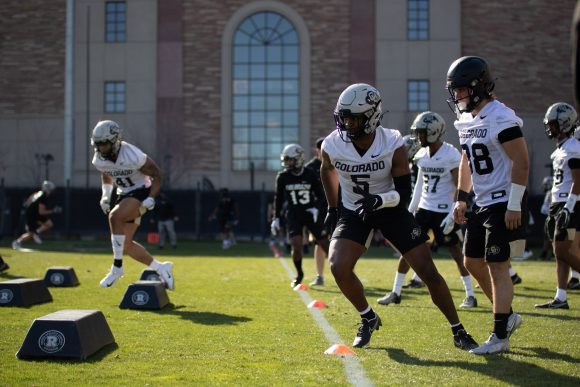 On March 29 the University of Colorado Buffaloes football team began spring practices in preparation for the fall season. After his first season as head coach, Karl Dorrell reflected on what the Buffaloes must do in order to give them a better opportunity to succeed in comparison to last season.

“You can sense a level of urgency, you can sense there’s a little bit more energy and passion about getting things right,” Dorrell said. “They’re trying real hard to get things right and doing things the right way.”

Dorrell emphasized how excitement, energy and passion played a huge role in their first practice. He also noted how one of the most important aspects of spring practices is to get players as many reps as possible, especially specific players that don’t see as much time on the field during the regular season games.

“You can tell there was a lot of excitement,” Dorell said. “You can tell with the meetings prior to practice and pre-practice, there was really good energy on the field. A lot of the guys wanted to start spring practices on a positive foot. We saw a lot of good things on both sides of the ball. As we see ourselves and look at our depth, we’re trying to get everyone reps. That’s what spring is for, getting everyone reps.”

Another large goal is to keep everyone healthy in order to have a successful spring and more importantly, a successful upcoming season.

Two running backs on the University of Colorado’s roster, junior Alex Fontenot and sophomore Jarek Broussard have each found a boost in confidence coming into spring practices. After a successful 2019, Fontenot sat out of the entire 2020 season due to an injury while Broussard won the Mayo Clinic’s Comeback Player of the Year award last season with a breakout campaign post-ACL surgery.,

“We have a lot of talent,” Fontenot said. “But the way I look at it is that I know my own ability and I’ll find a way onto that field”

Broussard expects that shedding a knee brace he used during the 2020 season will give him a boost this spring.

“Looking at film from last year, I’ve noticed the brace restricted me from a lot of things, so this spring I’m going without the brace to try and see how it’s different,” Broussard said. “I already feel better and as of right now it’s going good.”

After a devastating loss to the University of Texas in the 2020 Alamo Bowl, the Colorado Buffaloes took a step in the right direction and are looking for another postseason appearance this fall.

Brett is currently a junior at the University of Colorado Boulder. He is studying History while minoring in Sports Media. In his free time, Brett enjoys spending time with friends at the beach. Covering sports since 2018, he joined the CU Independent in January of 2021. Contact: Brett.polley@colorado.edu | Twitter @brett_polley