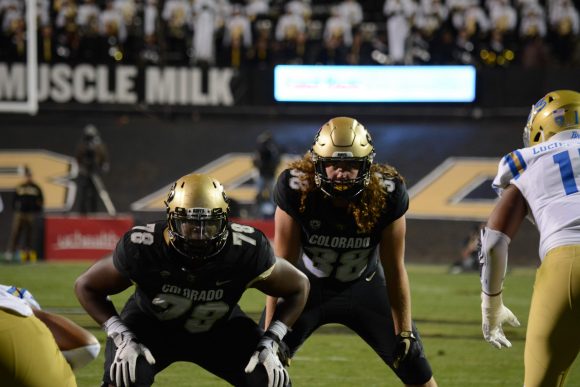 At the University of Colorado’s Indoor Practice Facility next to the iconic Folsom Field, Buffs’ senior defensive end Mustafa Johnson and junior offensive lineman Will Sherman were joined by a limited audience of NFL scouts and Colorado staff on Monday for CU’s annual pro day.  With COVID-19 restrictions still present, head coach Karl Dorrell described it as one of the smallest pro days he has ever seen.

Just over one year ago, Dorrell watched over his first pro day with the Buffs mere weeks after being hired. Now, with one turbulent pandemic season under his belt, Dorrell returned for a scaled-back pro day on Monday. As a result, Johnson and Sherman made up a minuscule two-man roster in front of the 24 NFL scouts.

After coming to CU as a junior college transfer and eventually coming close to CU’s all-time tackles-for-loss record as a defensive star for the Buffs, Johnson has decided he is ready to take his game to the next level. While Johnson played most of the 2020 season hovering around 290 lbs, he came into pro day at a more muscular 280 lbs. Johnson said he wasn’t worried about any criticism for being undersized for an NFL defensive end.

“What I lack in size, I gain in versatility,” Johnson said. “I don’t listen to the noise.”

His pro day, however, was hampered by a soft-tissue injury in his hamstring. Johnson was able to participate at close to full capacity and ran a 10-yard dash in 1.76 seconds instead of the traditional 40-yard sprint. He also busted out 27 reps of 225 lbs on the bench.

Sherman said he’s ready for the pro game no matter what role he is asked to take on and wherever he lands in the league. “I’m willing to adjust my play for any team,” Sherman said.

This became a focal point for his part of the pro day as Dorrell said that NFL scouts are looking for position flexibility. Sherman, who typically plays tackle, took reps at center to show his versatility. He ran the 40-yard dash in 5.19 seconds and completed 23 reps of 225 lbs on the bench.

Despite the lack of players both on the field and watching, Johnson and Sherman were still there to support each other all the way through. Both expressed how having a teammate on the sideline cheering them on was a big boost in being able to perform in this important career moment.

“Both of them looked good,” Dorrell said. “They feel energized getting out there … all and all a pretty good day.”

As a coach who has spent time in the NFL, Dorrell has a bit of experience in the NFL Draft process and had some advice for these young players on their way to the league. “It’s not about where you get drafted,” he said. “It’s establishing yourself and getting your second contract.”