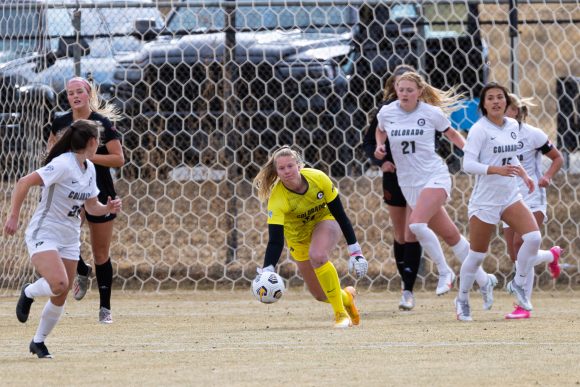 Goalkeeper Dani Hansen advances the ball away from the net during the first half at Prentup Field. Feb. 6, 2021 (Nigel Amstock/CU Independent)

In a game in which the University of Colorado soccer team couldn’t control the ball for extended periods of time, the Buffs defense and sophomore goalkeeper Dani Hansen stood strong to force a 0-0 draw against the University of Washington on Friday at Husky Soccer Stadium. The game was both CU’s first road game and its first Pac-12 conference game of the year. With the draw, the Buffs remain undefeated with a record of 3-0-1 to start the season.

“We are pleased to get a point on the road, but obviously going forward we are going to have to play better, but we really battled today,” said head coach Danny Sanchez. “I am really proud of the team for the commitment they made stepping up to a Pac-12 team on the road.”

Hansen’s performance highlighted a gritty afternoon for the Buffs. The transfer from Washington returned to play against her previous team and put on a defensive clinic against the Huskies. Hansen made a handful of impressive saves, but no save was more critical than the one she had in the 61st minute of the match. After a penalty within the box, Huskies’ senior midfielder Ameera Hussen earned a penalty kick. Collecting herself, Hussen lined up and hammered the ball towards the left goal post. Hansen had a read on the ball though, as she dived to knock the ball down to end the scoring threat.

“The penalty was the turning point of the match,” Sanchez said. “We give up that goal and we are chasing the game. Credit to Dani (Hansen) for a fantastic save, and really just a fantastic performance all around to give us a chance to get a point on the road.”

In total, Hansen, who was named Pac-12 Goalkeeper of the Week last week, saved 11 shots on the afternoon. Through three starts this season she has saved 23 shots and has not yet allowed a goal.

While Hansen did her best to keep the Huskies from scoring, the Buffs struggled throughout the game to get the ball past the center line as they dealt with a tough press from Washington. In the first half, CU had only one good look at the goal which occurred in the 35th minute. Following a throw-in from junior defender Hannah Sharts, the ball made its way to junior midfielder Kayleigh Webb. Webb shot the ball in traffic, but it went just wide right of the goal.

“They really pressed us, and I think at times we got a little impatient and we didn’t play with enough speed or player confidence to break that pressure,” Sanchez said. “I thought the last 30 minutes of the game and the first overtime we did a better job. But credit to Washington they pressed us the whole game and put us under pressure and we have to deal with it better if we are going to get a result on Sunday.”

As Sanchez explained, the Buffs were able to create a bit more pressure in the second half. Most notably, a chance that came off a penalty just outside of the scoring box in the 70th minute. Freshman midfielder Jenny Beyer took the free kick, but the ball from her kick flew just barely over the top of the goal to keep the game scoreless.

In the closing seconds of regulation, the Buffs were able to hold off one last offensive attack from the Huskies as a key deflection from sophomore midfielder Jade Babcock-Chi broke up what could have been a scoring play. In overtime, CU was able to control the ball more and the game really tightened up. The Buffs even got their first shot on goal of the day with a header from sophomore midfielder/defender Jesse Loren in the 104th minute. However, after two overtimes and 20 minutes of extra play, neither team was able to score as the game ended in a draw.

The Buffs won’t get much of a break before they challenge Washington again at Husky Soccer Stadium on Sunday at 1 PM MST.