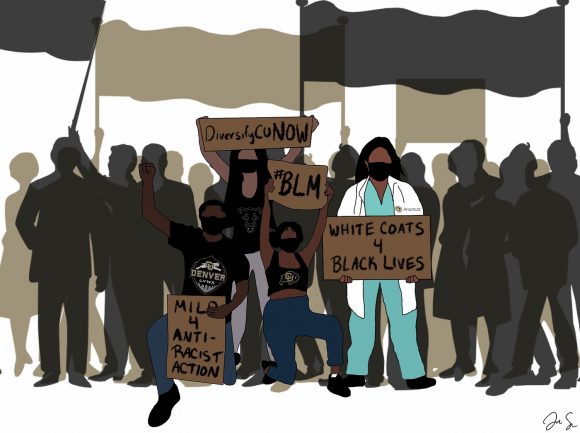 Wednesday, Sept. 9 marked the second day of an event organizers termed a #ScholarStrike. Across the country, students, staff and educators participated in conversations and education about anti-racism and police brutality.

Nationally organized by Anthea Butler and Kevin Gannon, the Scholar Strike found its way to the University of Colorado Boulder. DiversifyCUnow, a student led activist organization, published the details of the university’s Scholar Strike on their website.

“Instead of proceeding with your scheduled lesson, have students watch and discuss the above 45-minute recorded webinar on CU BIPOC student activism against police brutality and violence,” reads the website. “Amplify the multipronged work for racial justice and equity led by CU Boulder students and staff.”

Associate English Professor Cheryl Higashida was a participant in the CU Scholar Strike. She, along with many other faculty at CU, took time out of her normal classes to educate her students about the strike.

“Instead of teaching as usual, for example a novel, what I did was I showed my students the webinar and started discussions about the webinar and activism around police and policing on campus,” said Higashida.

The webinar diversifyCUnow published featured a list of speakers from the university BIPOC community, including Higashida. One of these student speakers was Holly Olivarez, co-organizer of diversifyCUnow. Olivarez is a PhD student at the university, and has led many of the calls for social and structural reform across campus.

Olivarez stressed that diversifyCUnow was not the creative force behind the Scholar Strike, instead they served to amplify the activists within the BIPOC community who were focused on this issue.

“We were making it known that we wanted anti-racism to become a priority, or being an anti-racist institution should be a priority at CU and that it hasn’t been,” said Olivarez.

According to Higashida and Olivarez, the first day of the Scholar Strike went well. Both mentioned they had received positive feedback from their colleagues and peers.

“If each class, if each instructor, is bringing this up to their students, it’s giving everyone permission to talk about this at CU,” said Olivarez.

Despite the fact that some teachers and faculty didn’t mention the strike in their classes, Higashida remains hopeful that the university’s community will gain something from these two days of education about police brutality.

“Listen to these demands that (BIPOC) students and faculty to divest from campus police.”

In the end, Olivarez said, this work is as influential internally as it is externally.