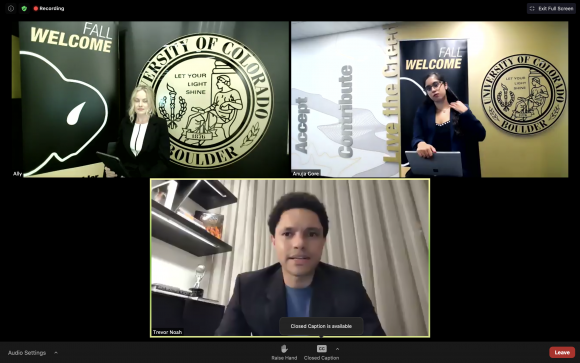 At the culmination of a week of move-ins, COVID-19 testing and virtual gatherings, the University of Colorado Boulder wrapped up their welcome week with an appearance from a special guest.

The CU Cultural Events Board (CEB) invited Trevor Noah, host of the Emmy and Peabody nominated late night program The Daily Show, for a moderated discussion hosted on Zoom.

On Wednesday, the CEB announced that Noah would be appearing at 8 p.m. on August 22nd. The announcement, first posted on Instagram, drew attention from incoming freshman and current students.

However, come Saturday, the program got off to a rocky start. Twenty minutes after the scheduled start time had come and gone, the two student hosts, Anuja Gore and Ally Roberts, announced that the program was experiencing technical difficulties.

“We thank you for your patience as we figure out the adventures of Zoom events,” the CEB posted to their Instagram story at 8:30 p.m.. Like a multitude of professors and administrators who had presented at Zoom welcome events just a few hours before, the hosts of the event struggled to adapt to hosting a guest virtually.

At 8:45 p.m., Vice Chancellor of Student Affairs Akirah Bradley kicked off the discussion. She noted that this particular Zoom webinar had more complicated security to “prevent Zoom bombing.”

Once Gore and Roberts introduced Noah, things got underway.

“This Zoom call has more security than my bank account,” started Noah.

The student moderators quickly moved into some particularly heavy topics, especially around the comedian’s early life in South Africa under apartheid.

“I grew up in an environment where people’s identity is determined by their skin color,” Noah said. From a young age, he continued, “I was very aware of the fact that the color of our skin has shaped or affected our lives.”

In a way, he explained, the segregation and discrimination of his early childhood influenced his foray into comedy.

“When you get bullied you have to figure out how to outsmart the bullies,” Noah said.

Noah mentioned that “comedy became one of the tools that I used… it would get me out of sticky situations.”

The moderators then moved to Noah’s challenges growing up. Noah said that, since his mother is African and his father is European, under apartheid, his parents lived in two opposite communities, and had very different experiences. This difference, Noah said, helped him learn how to tailor his speech towards different audiences.

He was taught that “people can live in the same world and have two completely different experiences.” Not only has this knowledge aided him in his comedy, but its influenced his coverage of the news on The Daily Show.

“I try to create a show that is funny and informative,” said Noah.

When looking for issues to talk about on his show, Noah said that he doesn’t find singular events worth generating fear or anger over. He said that he’ll often ask himself, “is this a story about (one) thing or a larger thing?”

Systematic racism has been a topic Noah has covered on The Daily Show for a long time, and he was asked several questions about the issue.

“In America,” he began, “people have tried to blur the lines between history and philosophy.”

Instead of debating the philosophical implications of America’s complicated history, Noah says it’s better to simply understand it.

“If we understand how we got here, you learn two things: how to fix the thing and how to stop it from happening again,” he said.

Noah said that the reason why some people draw issues with the current Black Lives Matter protests and calls for racial justice is because racism in America isn’t overt.

“It’s a system, a very subtle system,” he explained. He added that the public’s lack of knowledge of the subject is a reason why higher education is so important in this moment.

“For me, university is a place where you can share ideas that you wouldn’t normally.”

Noah said that dealing with challenging topics and differing opinions is one of the most important parts of college, and the ability to challenge yourself is a skill that’s hard to learn.

“I love being in an environment where I feel like I have to learn more to be there,” he said.

As the discussion came to a close, Noah ended with some thoughts about the virtue of going to school digitally in a pandemic.

“I know some classes may not be amazing,” he closed, “and some lectures may not be interesting, but if you have this time, use it.”