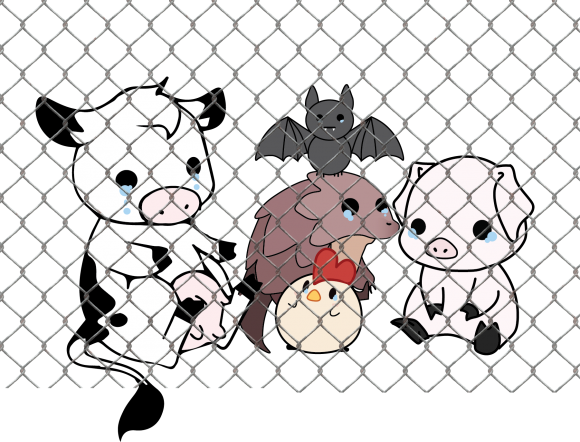 To satisfy human’s growing desire for meat (both wild and domesticated), we are turning to cruel livestock practices, disrupting the delicate ecological balance. Our inhumane treatment of animals creates the ideal breeding ground for infectious zoonotic diseases (diseases passed from animals to humans), which are becoming increasingly virulent and dangerous. If we don’t stop exploiting animals, COVID-19 is just the beginning of 21st-century pandemics.

In the face of a global pandemic, the term “wet market” has become synonymous with COVID-19, the disease caused by the novel coronavirus, which first spread in Wuhan’s Huanan Seafood Wholesale Market in December of 2019. The market in Wuhan sold wild animals, including porcupines, otters, deer, snakes, masked palm civet, donkey, wild boars, peacocks and bats. Scientists believe the virus originated in bats. A similar virus was detected in pangolins, but the intermediate host is still unknown.

Now, 94% of China’s wet markets have reopened, even though the trade of wild meat is banned. Clearly, this ban is not enough. We need to permanently close all wet markets worldwide and stop destroying the world’s ecosystem with unsustainable meat cultivation.

Beyond COVID-19, zoonotic diseases have threatened humans for centuries. Cowpox came from domesticated cows in the 18th century. The 1918 flu pandemic likely originated in domesticated birds on Kansas farms. HIV & AIDS came from the consumption of chimps in the Democratic Republic of Congo in the 1920s, spreading globally in the 1980s due to international travel. UK farmers fed cows ground-up animal parts, leading to mad cow disease in 1986. 2002’s SARS, the first serious coronavirus, originated from bats, likely from a wet market in the Guangdong Province in China. In 2013, the lethal disease Ebola also likely came from bats in Africa. Other familiar diseases, including the seasonal flu, MERS, Zika, swine flu, avian flu, salmonellosis, rabies and bovine tuberculosis are zoonotic as well.

“We need to permanently close all wet markets worldwide and stop destroying the world’s ecosystem with unsustainable meat cultivation.”

Today six out of every 10 infectious diseases in people are zoonotic according to the Center for Disease Control. The emergence of these zoonotic diseases is on the rise. One 2020 study, published by the Royal Society, claims that “exploitation (has) increased opportunities for animal–human interactions and facilitated zoonotic disease transmission.”

Live markets are a prime example of the dangers of animal exploitation. These markets are like an all-you-can-infect buffet for viral pathogens. Humans and live animals are packed together in unsanitary conditions, creating an ideal breeding ground for infectious diseases. Viruses can easily swap genetic code due to the animal’s close proximity and rapid mutations increase the likelihood of interspecies transmissions. Respiratory diseases in particular, like COVID-19, are transmitted by bodily fluids, an unavoidable part of the bloody slaughter process.

At the University of Colorado Boulder, biology professor Sara Sawyer’s lab in the BioFrontiers Institute researches viral spillover from animals to humans, including COVID-19. Cody Warren, a postdoctoral research fellow at the lab, explained their research looks at how “genetic barriers prevent viruses jumping from animals to humans.”

“There are hundreds of thousands of viruses that exist in nature,” Warren said. “Only a really small fraction have been able to successfully jump into humans.”

In terms of COVID-19, he noted that a “vast diversity of bat coronaviruses exist in nature,” never infecting humans. However, when humans are in close contact with bats or other animals in unhygienic conditions, such as in wet markets, the likelihood of zoonotic disease spillover increases.

“With coronaviruses, it seems to be one of the primary determinants is their ability to enter the target cells,” Warren said. “It’s the perfect storm of that virus interacting in a complex environment of a wet market with different animal hosts, acquiring particular changes in the viral genome that allows it to infect a human. Any sort of unhygienic practice will put us at elevated risk, especially with animals we don’t normally encounter in nature. We are exposing ourselves to viruses we have never seen before.”

According to Richter, the Shennong Bencao Jing (神农本草经), an influential third-century medical treatise, explains the foundations of traditional Chinese medicinals.  Five to 15% of medicinals use animal products. The suspected COVID-19 hosts of bats and pangolins also appear in the text. Although specific benefits have changed over time, Richter said bats are often believed to “relieve cough and asthma, promote diuresis, calm the liver,  improve eyesight and relieve internal heat.” Pangolins are believed to “invigorate blood circulation, dissolve clots and promote lactation.”

With globalization and international travel, the risk is even greater than our last great pandemic in 1918. When an infectious zoonotic disease appears in the 21st century, it will spread rapidly and uncontrollably to the rest of the world as COVID-19 has in about six months.

While the COVID-19 pandemic rages on, governments and experts focus on mitigating the effects, instead of going after the underlying cause — animal exploitation. In wet and live markets in forests, in industrial farms, in ecologically threatened areas, our treatment of animals is deplorable and dangerous.

We are killing the Earth’s creatures and ourselves. If we don’t change now, COVID-19 will not be the worst 21st-century pandemic and our next pandemic will be the 21st century Black Death.