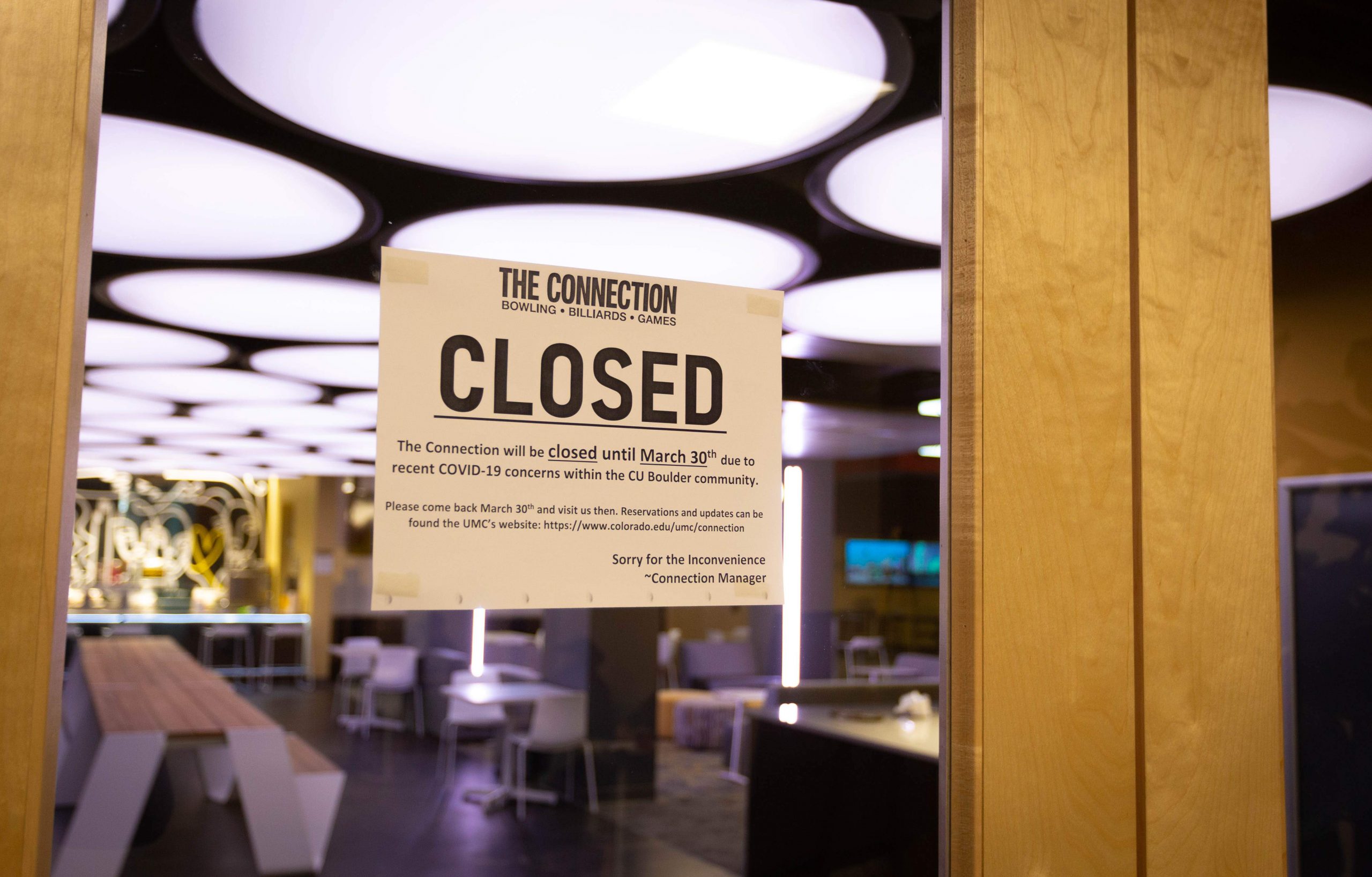 The recently renovated bowling alley and student lounge The Connection displays a sign that it is closed due to the spread of COVID-19. March 17, 2020 (Kevin Wu/CU Independent)

During a virtual meeting Thursday, University of Colorado President Mark Kennedy told CU’s Board of Regents he is considering “small pockets of furloughs” for some employees across the university’s campuses.

A final decision will not be made until at least mid-May when the university hopes to have a clearer picture of the state budget and its own revenue, according to CU system spokesperson Ken McConnellogue.

Kennedy, in his address to the regents, said should furloughs be necessary they will be focused on auxiliary units on campus that pay employees through revenue generated by their services. This includes residence halls, dining services, the CU Bookstore and parking services.

“Auxiliary units are dependent on their own revenue stream,” Kennedy said Thursday. “To the extent that it has ceased, we are going to need to do furloughs, but we would love to have those people back as soon as we are physically able to continue those activities. It’s for this reason that we are working so hard to do everything we can to be back up and running in the fall if at all possible.”

Ariana Falco, a CU Boulder junior who works three campus jobs, said she hopes the university has an answer sooner rather than later.

“For a lot of student employees, our last paycheck is May 16, so if they’re waiting until the end of May to make a decision, that really puts a lot of students in a tough spot,” she said.

Falco works as a staff writer for CU Boulder Today and is a peer advisor for the Program in Exploratory Studies. She also does website and social media work for two campus-based research labs, however, she has been on paid leave for both that job and her one as a peer advisor at least until May.

After that, she said she doesn’t know what will happen.

While those positions may not be deemed an auxiliary service, Falco said it is still very possible she may not have those jobs in the near future, meaning two-thirds of her income would be lost.

“They help me pay for my rent to live in Boulder, groceries, everything,” she said. “It definitely is something I rely on for survival needs.”

CU is already preparing for a financial blow as the coronavirus pandemic continues to upend the state’s economy. During a system finance committee meeting earlier this month, officials estimated the university’s state funding could drop from $248 million in 2019 to $156.7 million by 2023.

On March 20, Kennedy joined 19 other Colorado higher education leaders in writing a joint letter to the state’s congressional delegation asking it to work alongside Congress to deliver financial aid for Colorado community colleges and universities.

According to McConnellogue, CU will have to wait until mid-May to know how much financial relief the federal government could provide.