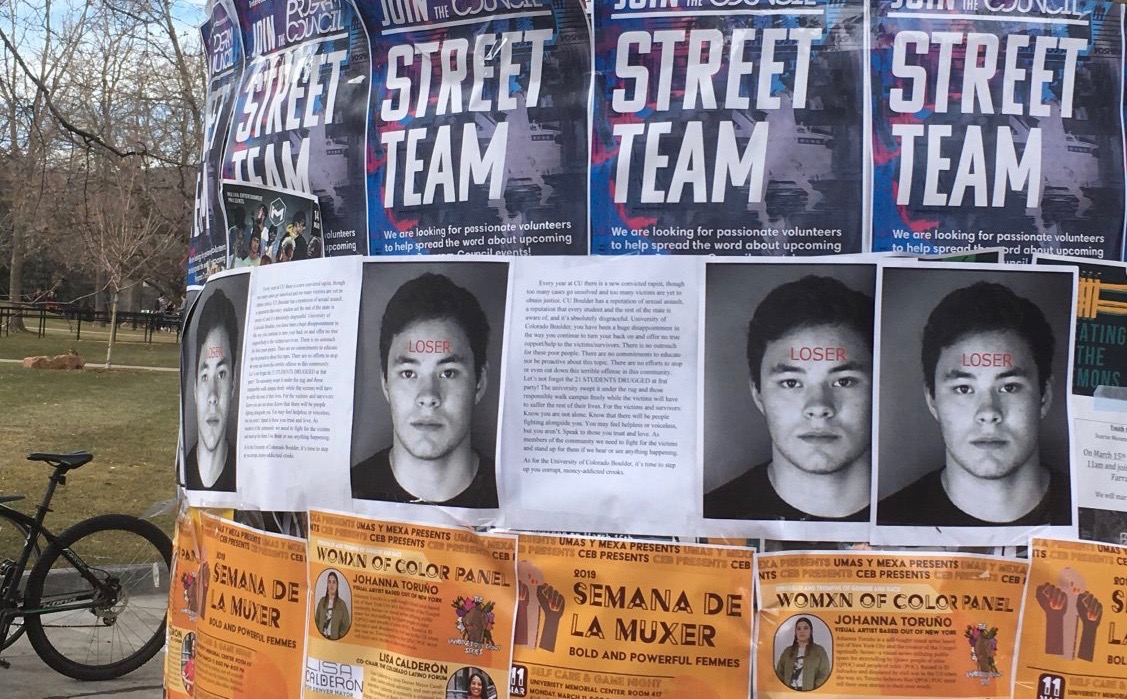 Flyers of Zachary Roper’s mugshot were displayed on campus after his arrest. (Carina Julig/CU Independent file)

Editor’s note: A previous headline misreported that Zachary Roper’s trial was postponed until May. Although Boulder County has delayed all jury trials until at least May, Roper will not appear at a status conference until early June. The headline and article have been updated.

Not even the justice system is immune to the effects of the novel coronavirus with the trial of a former University of Colorado Boulder student accused of rape, set to be held Monday, now delayed in an effort to avoid the spread of COVID-19 according to the Daily Camera.

Zachary Roper, 20, who remains free on bond, was arrested for reportedly raping a female student after a sorority “date-dash” on Jan. 31, 2019. Roper is charged with sexual assault on a helpless victim, a Class 3 felony, and sexual assault on a victim incapable of appraising conduct, a Class 4 felony. In October, Roper pleaded not guilty.

Boulder County in March delayed all jury trials until at least May, meaning Roper will face trial more than a year after a Boulder judge found enough evidence to proceed with the case. He is set to appear at a status conference on June 3.

In January 2019, then 19-year-old Roper was set up on a date with the victim, who did not previously know Roper, per the sorority’s requirements. After leaving the sorority event in Loveland, the woman was put in an Uber to be driven back to the sorority house. Roper, who went along with her, allegedly used the Uber app to be rerouted back to his apartment where he took the woman inside. The driver remembers the woman being asleep for most of the ride and needing help to get out of the car. Although the victim said she does not recall most of the night after drinking, she remembers waking up to Roper sexually assaulting her.

Several witnesses have affirmed these claims, including Roper’s roommate who witnessed Roper having sex with the victim.

The case sparked outrage among CU Boulder students who in March 2019 formed a campaign, “Expel Abusers,” which protested the university’s treatment of sexual assault victims and demanded Roper’s suspension from campus.