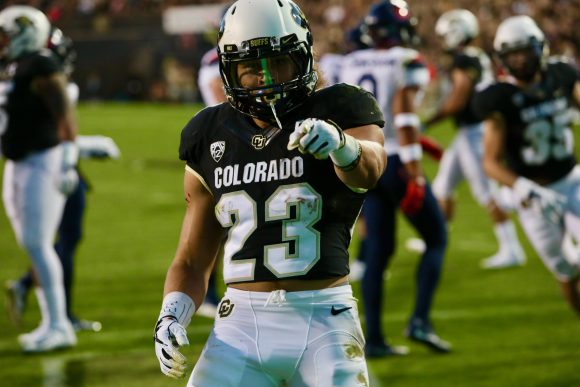 Phillip Lindsay celebrates after scoring a touchdown versus Arizona during a game on Oct. 7, 2017. (Max Sassaman/CU Independent)

On Wednesday, Feb. 26, the University of Colorado Boulder hosted the 2020 Inclusive Sports Summit. The morning keynote tackled the subject of hidden disabilities among athletes, such as ADHD and other personal obstacles. On the panel, former CU running back Phillip Lindsay opened up about his experience with a hidden disability. Other speakers included current women’s lacrosse defender Elinor Wolf, CU Athletic Associate Director and Learning Specialist Michele Brannigan and Kellen Story, Manager of Program Initiatives at CU.

Student-athletes are tasked with two full-time commitments with the sport they play and the degree that they are pursuing. For many, that can be overwhelming. And for those with a hidden disability, it can become impossible to keep up.

A difficulty facing the CU staff is getting those with hidden disabilities to speak up and make it known they need help.

“The issue with student-athletes is building that trust, they’re vulnerable,” Brannigan said. “They’re great at their sport, they’re on scholarship here and they are supposed to be doing everything right. They’re held way up here and then they know deep inside they’re struggling with academics.”

When he first arrived on campus, Lindsay admitted to initially ignoring his learning disability.

“I got to college and I was going to be quiet about it, I wasn’t going to say much and I was just going to go on,” Lindsay said. “I started struggling in school, I wasn’t getting the help I could get and it wasn’t until my mother called Michelle, I didn’t even know it, and she told Michelle I had a learning disability. I was mad at first because I was like, mom why are you doing that to me? I was embarrassed.”

Lindsay emphasized the importance of building up students with hidden disabilities.

“I needed somebody there that really believed in me, you get to college and you can get lost. I got with Michelle and I got confidence in myself and was able to be okay with who I am.”

Over 3,000 students at CU Boulder are registered with disability services. Most students are eligible to receive extra time on exams and take exams in a distraction-reduced environment. Students can also request a note taker to share lecture notes from each of their courses.

Wolf was diagnosed with her disability in her junior year of high school; however, the high school she attended was not very accommodating towards those with learning disabilities.

“When I got to CU, I was extremely nervous about how I (was) going to stand out with 30,000 undergrads and over 400 student-athletes,” Wolf said.

However, when she got to college, Wolf completed 2019 on the Pac-12 All-Academic Team and the IWLCA Academic Honor Roll.

While Lindsay and Wolf have struggled with their hidden disabilities, they hope to influence other students and pave a way for future athletes to embrace themselves and try to improve their own lives.

“Embracing who you are is extremely important to better yourself and others around you,” Wolf said. “Don’t doubt yourself because you’re awesome, you are capable of doing anything and don’t let anyone else tell you otherwise.”