Buffs off to 3-0 start thanks to their defense 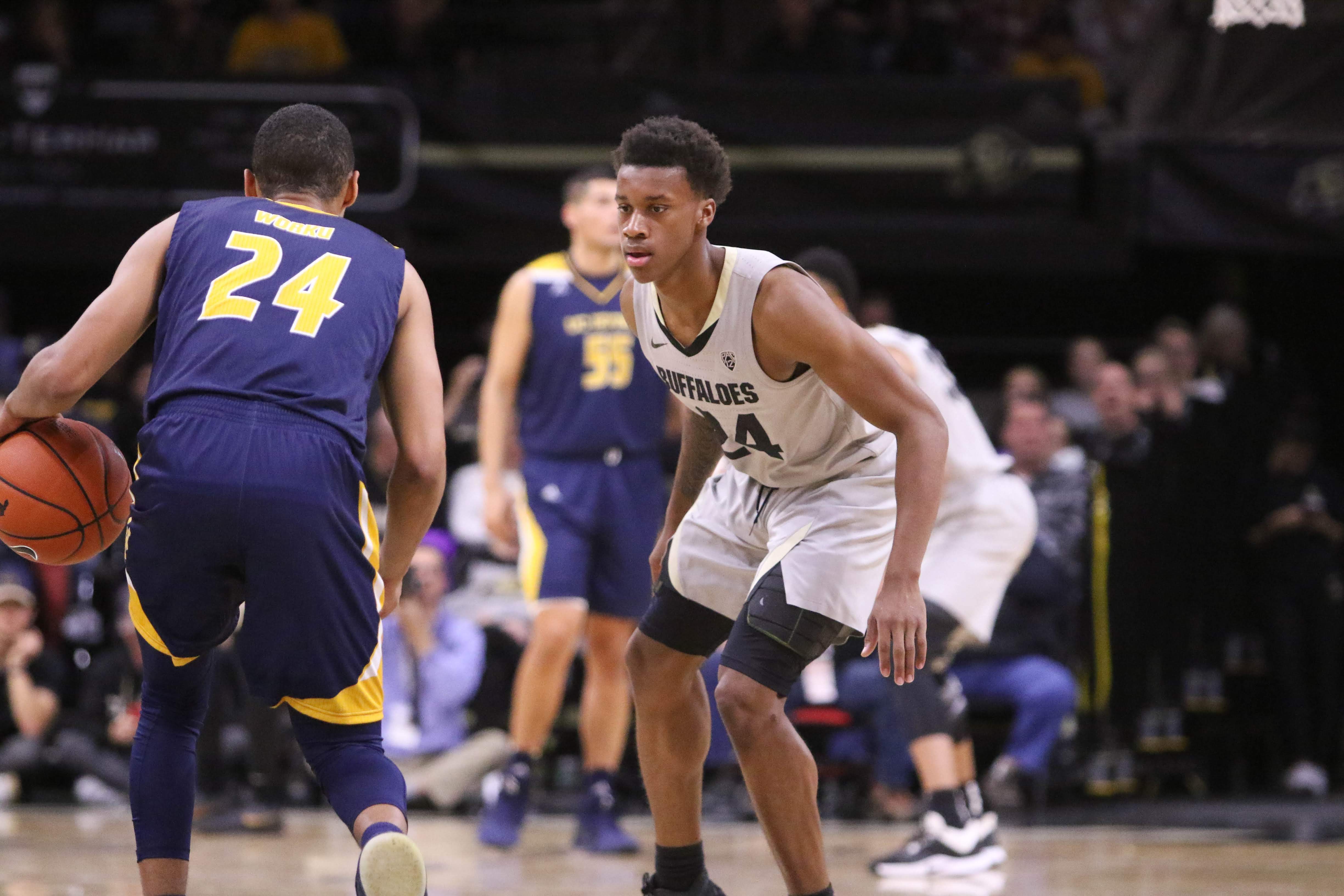 The Anteaters entered the game on a roll offensively by scoring an average of 79 points in their first four games of the season. Proving they were up for the task, the Buffs’ defense held UC Irvine to a season-low 53 points and forced 22 turnovers.

“It makes you feel really good as a coach when your players kind of take that challenge,” head coach Tad Boyle said. “I thought our defensive intensity and awareness for 40 minutes was really good tonight.” 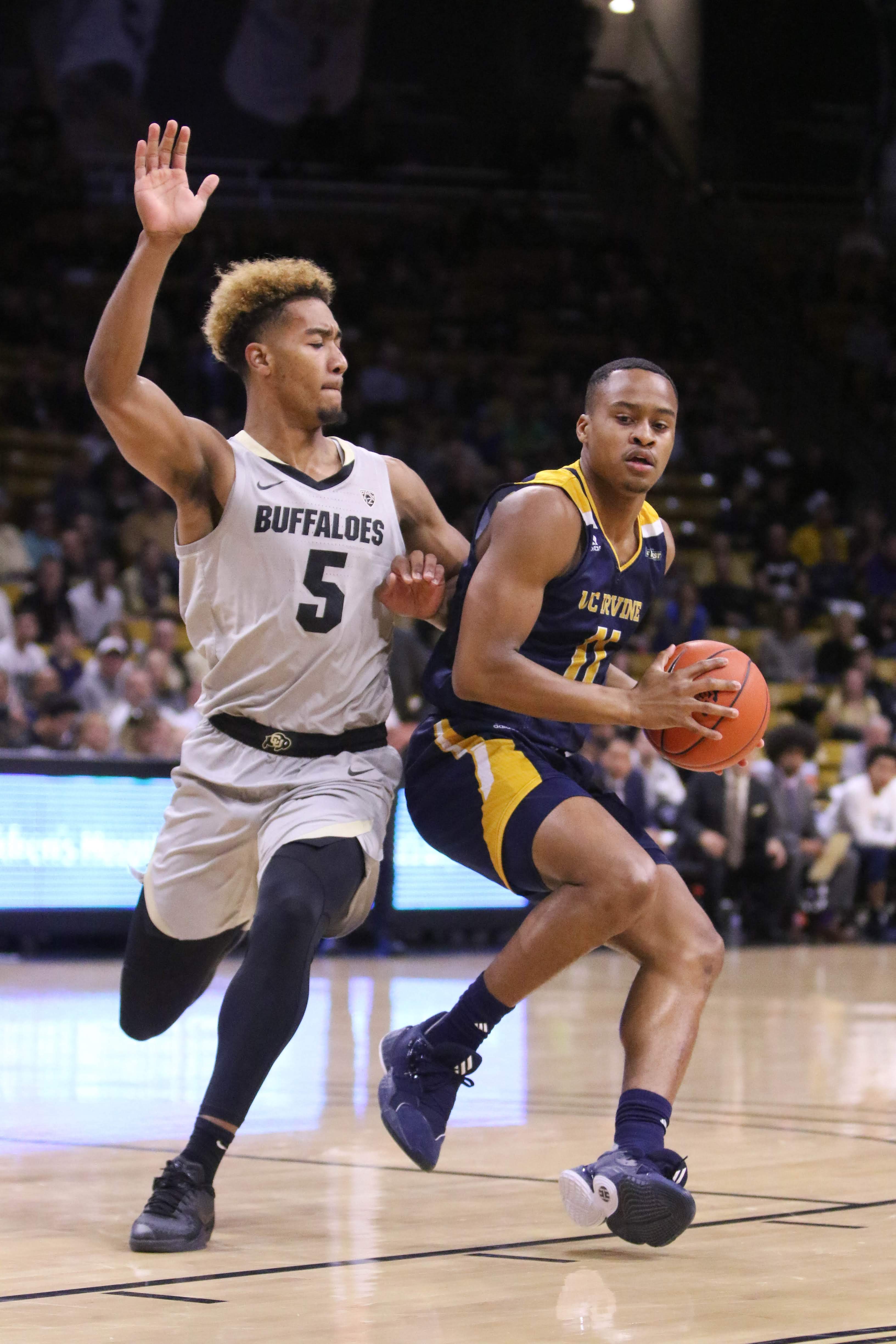 Colorado’s junior forward D’Shawn Schwartz looks to cut off University of California Irvine’s senior forward John Edgar during the first half at the Events Center on Nov. 18, 2019. (Kara Wagenknecht/CU Independent)

While their defensive showcase against Irvine was great on its own, Colorado is encouraged because it was a continuation of the previous win versus San Diego. This is not the Buffs’ only defensive showcase. Against the University of San Diego Toreros, Colorado also held the Toreros to 53 points and picked up 11 steals and four blocks in the process.

Following the San Diego game, Boyle continued to stress the importance of defense as the team prepared for UC Irvine. The players took Boyle’s plea as a challenge and responded in a big way.

“Coach has really been stressing it in practice, especially with how good this team was,” junior point guard McKinley Wright said. “They had 31 wins last year, won a game in the NCAA Tournament and returned their starters. We just had to really dial into the scouting report, and I think every guy on our roster did that and took the challenge personally.”

One of the biggest reasons for the Buffs’ success on defense has been the play of junior guard/forward Tyler Bey. Bey has recorded 17 rebounds, three blocks and eight steals in his past two games. Six of Bey’s steals came in the win over UCI which was vital to Colorado’s success in limiting their offense. The Anteaters run an offense that relies on their ability to pass to open shooters from the paint and Bey’s defensive presence inside made that difficult for them to do.

“You play post defense with your feet and your brain,” Boyle said. “When Tyler moves his feet and plays with awareness and energy on defense… holy cow. He is disruptive because he is so athletic and so quick.”

Through three games the Buffaloes are living up to their high expectations. The offense has struggled a bit as they continue to form a consistent rotation, but their play on defense has allowed them to explore various lineups without fear of losing games. Even though Colorado is still growing as a team, their performance so far has made them confident that they’ll develop into a team capable of making a run in the NCAA tournament.

“When we start making shots and start making free throws, this team can be explosive on both sides of the ball,” Boyle said. “The defensive side to me is a great sign of where we are for this time of the year.”

The Buffs will travel to Las Vegas to play Wyoming in their next game and then return to Boulder to host Sacramento State on Nov. 30 at 7 p.m. MST at the CU Events Center.