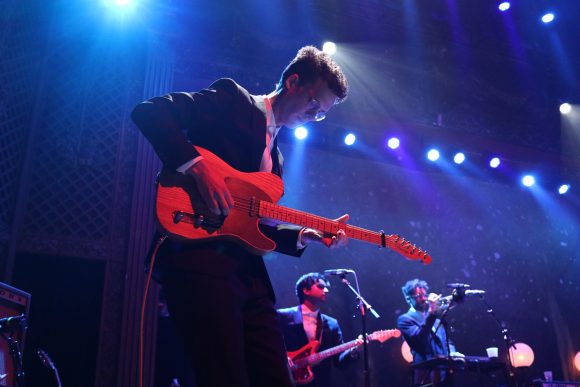 Chicago folk/indie-rock band Whitney has done some growing up. The band took the stage at Denver’s Ogden Theater Monday for their second Colorado show of the year and showed how the band as evolved from a naive group of friends to a concise band of musicians.

Whitney opened their performance with their 2016 track “Polly,” a ballad about lost love and the absence of time. The evening progressed through slow and danceable tunes, with guitar leads and trumpet harmonies syncopating with shimmering keys.  The band’s sonic depth echoed through three guitars, one bass, a drum kit, a Wurlitzer piano and one trumpet.

On tracks like “Golden Days,” Whitney’s Denver fan base resonated through the collective voice of the crowd as they sang along with lead singer and drummer, Julien Ehrlich.

Founded after the 2014 breakup of the Chicago indie band Smith Westerns, the group was formed via mutual collaboration from Smith Westerns guitarist Max Kakacek and Unknown Mortal Orchestras drummer Julien Ehrlich. Their debut album landed the group generous publicity and a European tour. Within two years, Whitney had risen to global fame.

At the Denver gig, Whitney showed how tight they have become as a group and the aesthetic changes they have made within their on-stage presence since their earlier shows. What used to be a group of grungy mid-twenty somethings has cleaned up into a group of half a dozen polished musicians. The band even sported matching black suits. 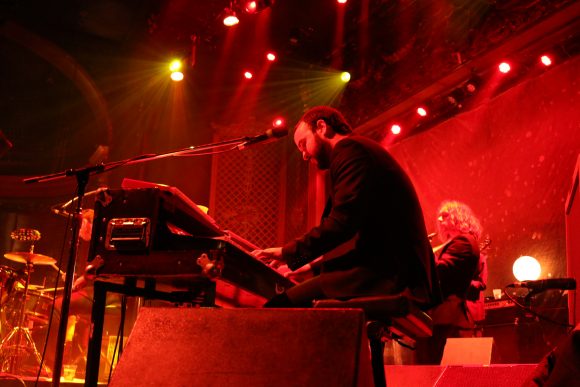 While founding members Ehrlich and Kakacek have earned most of the limelight, pianist Malcolm Brown and trumpeter Will Miller are emerging as forces of their own. Tracks they played Monday were met with layers of instrumentation and solos from both Brown and Miller. Tracks like “Follow” and the group’s cover of NRBQ’s iconic song “Magnet” allowed for episodes of breakout piano and trumpet solos that shocked even the most hardcore Whitney fans at the show.

The group’s newest album, “Forever Turned Around” added to their catalog but failed to accomplish something completely different. The structure of the record reflected the same layout as their first with an instrumental track breaking up the progression of songs. However, while their first album “Light Upon the Lake” captured the essence of endless summers, the sounds of “Forever Turned Around” fall victim to darker aspects of loneliness.

Their last show, a free Boulder gig, featured a stripped-down version of the band. The group was reduced down to four members with Ehrlich playing guitar instead of drums. Monday’s show gave fans an authentic Whitney show that sounded true to the recordings with the full band in force.

Monday came to a close in a different manner than usual Whitney shows. Normally, the group will end with their staple track “No Woman.” However at Monday’s show, the band covered “Southern Nights” by Glen Cambell and closed with “Valleys (My Love),” a soothing acoustic-driven song with soft, gentle reverberated guitar leads.

Whitney will continue to tour into December with five tour-closing shows in their hometown. More information can be found here. A review of their most recent album can also be found here.