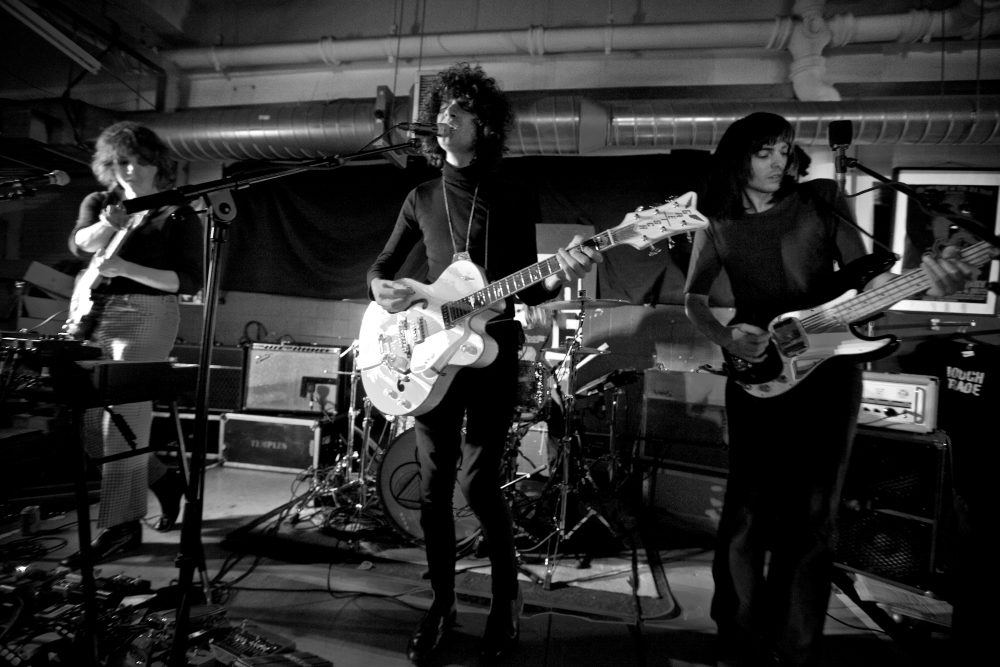 The audience slowly filed into the small theater floor as opening singer-songwriter Honey Harper delivered a performance filled with soulful ballads and a Western flair. Harper’s songs alternated between acoustic riffs, flutes, chimes and synths, and the audience swayed contently to the beat as they were immersed in the mellow rhythm.

Though Temples has always drawn musical and aesthetic inspiration from the psychedelic rock era of the late 1960s, they made it clear they were going for something completely different in their live performance. The stage lights flashed multicolored beams onto the audience as a cinematic overture rose to prominence in the venue’s speakers. The audience’s energy grew and the rock trio confidently strutted out onstage. Each band member wore reflective silver jackets and sporting shaggy long hair reminiscent of glam-rock stars from the 1980s.

Though the Gothic Theatre held less than a thousand concert-goers, Temples arrived with arena-rock charisma. The band started their set with the song “The Howl,” a high-energy anthem off their most recent album “Hot Motion.” The distorted electric guitar of lead singer and guitarist James Bagshaw echoed over the drum kit.

The musicians bobbed and swayed as they riffed on their guitars through the performance of “Hot Motion,” their album’s title track and one of the most triumphant moments of the show. Their masterful guitar playing, a mix of high sitar notes and gritty fuzz pedal riffs, led the audience through the song.

Temples’ live set relied heavily on nostalgia. The psychedelic and glamorous sounds in conjunction with Bagshaw’s sparkly outfit and versatile vocals recalled the androgynous persona of David Bowie. Throughout the performance, Bagshaw switched from a high-pitched voice to a lower one with ease.

The band ended the set with two of their most popular songs, “Holy Horses” and “Shelter Song.” Bagshaw smiled as the audience sang along to “Shelter Song” before letting his electric guitar ring out as he walked offstage to applause.

In typical rockstar fashion, Temples returned for an encore.

Bagshaw began the band’s final song with a simple final request, “When it gets to the loud part, I want you to mosh!”

Both Temples and the audience weren’t ready for the show to end. The trio concluded their set triumphantly with “Sand Dance.” Relying less on vocals, the band extended the song so Bagshaw could deliver a passionate guitar solo for the crowd to mosh to, bringing the evening to a close with heavy energy.

Temples currently has three albums released. A review of their most recent album “Hot Motion” can be found here. The trio plans on continuing to tour both in the U.S. and abroad. Tour dates and ticket information can be found here.