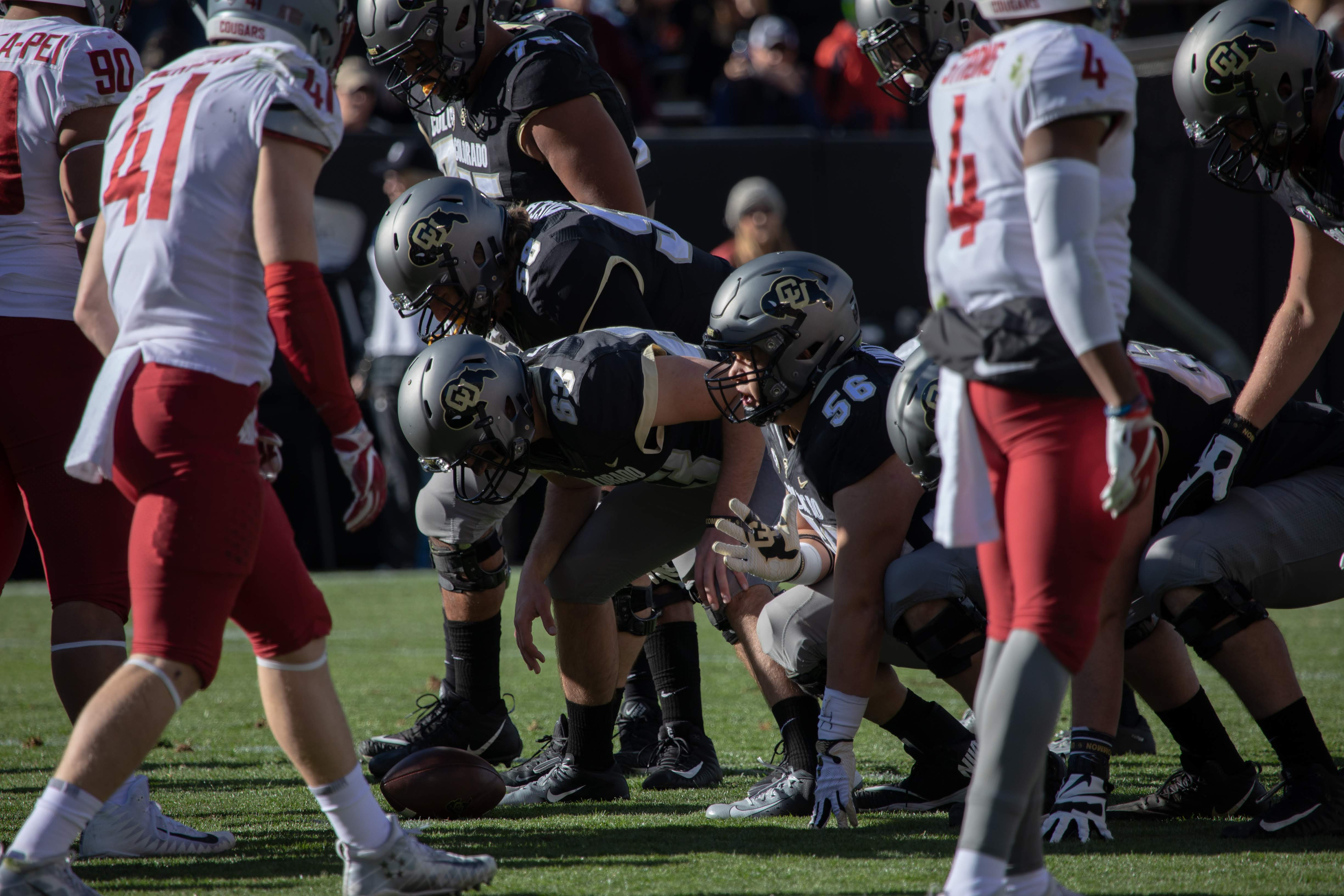 The Buffaloes line up against Washington State during the 2018 meeting at Folsom Field. Nov. 18, 2018 (Kelsey Mullins/CU Independent File)

After a crushing defeat against No. 12 Oregon last week, the (3-3) Colorado Buffaloes find themselves on the road again Saturday, facing the (3-3) Washington State Cougars. In a battle of .500 teams, our sports staff writers predict who will come away victorious.

The Buffs find themselves in a crucial part of their season. Sitting at 3-3 and 5th in the PAC 12 south after last week’s blowout loss against Oregon, they look to rebound this week against Washington State in Pullman. Not much has gone the Buffs’ way, but they need to start getting more looks to junior wide receiver Laviska Shanault Jr. The projected first-round draft pick has battled an injury, but with only two touchdowns on 296 receiving yards, he is looking for his breakout game in 2019 and I feel like Saturday is his day.

The Washington State Cougars find themselves in a similar position as they’re also 3-3 and 5th in the PAC-12 North. After a hot 3-0 start to the season, they lost a heartbreaker to UCLA and have not been the same since. There is a bright side for the Cougars in the form of senior quarterback Anthony Gordon. Having a solid year at the halfway mark with 25 TDs and 2,612 passing yards, look for Gordon to test Colorado’s young and inexperienced secondary.

My gut tells me that this game is going to come down to which team’s defense can show up and make big plays when they need it. The Buffs have struggled on defense all year, but with the return of some key figures, I see Colorado going into Pullman and stealing a much-needed win.

Though both teams share a 3-3 record, only one can leave Martin Stadium with a four in the “W” column Saturday night. Just a year ago, the Cougars came to Boulder riding high, and left the same, with a 31-7 victory over the Buffs. While I expect a much better performance from CU this time around, I can’t predict a different outcome. Last week’s 45-3 loss to Oregon showed various weaknesses in the Buffs’ defense, exacerbated by the questionable status of junior defensive lineman Mustafa Johnson. The Cougars offense – 5th in yards per game among all college football teams – is undoubtedly looking at CU’s performance and licking their lips. On the other side of the field, the Cougar’s defense is a far cry from the Duck’s, who’ve only given up 8.66 points a game, compared to Washinton State’s 31.8 per game. That being said, the inconsistent CU offense still has plenty to prove.

Saturday’s focus will likely be the passing game. The return of Laviska Shenault Jr. should fuel some improvements in the Buffs’ passing offense, though a measly three points in four red zone trips against Oregon should raise questions about the scoring potential of the Buffs. Opposite this, CU’s given up an average of 341 passing yards per game in its past three contests, something the Cougars will look to exploit. However, the return of junior safety Aaron Maddox against Oregon last week should be cause for hope. In what I anticipate will be a seemingly even match, a home-field advantage and positive passing matchup will give Washington State a slight edge over the Buffs.

CU faced a tough loss to Oregon on Saturday, bumping them down to 3-3 on the season. They had a great drive before halftime, which had a lot to do with Laviska Shenault Jr. and sophomore tailback Alex Fontent, but it was quickly dismissed through various mistakes, ending the half with an endzone interception.

Although CU may feel defeated after last weekend’s game, Washington State will be heading into the weekend with similar emotions. The Cougars lost 38-34 to the No. 18 Arizona State Sun Devils on Oct. 12, falling to 3-3 on the season as well.

With that, Saturday’s game should be a close match between the Cougars and Buffaloes. During their 2018 matchup, Colorado left defeated 31-7.  This evened the all-time CU vs WSU series to 6-6 and the Buffaloes will be fighting to come out on top this year. However, Saturday is Washington State’s homecoming game, so they will be fighting even harder to make their school proud. As long as CU focuses on their defense and minimize their mistakes, it could be a win for the Buffs this weekend.

It’s quite an understatement to say Colorado is coming off one of the most embarrassing losses in the past few years. Now as a result, the Buffs are looking at the make-or-break point of their season as they take on Washington State. While it may seem like the sky is falling for CU, I’m going to do my best to remain optimistic.

Despite averaging an absurd 43 points per game this year, Washington has dropped their past three games and are the only team in the Pac-12 without a win in the conference. The main culprit for their recent struggles has been their defense, which is giving up 31.8 points and 459 yards a game. That’s still not as bad as CU’s, but it’s close. There’s no excuses for Colorado’s offense not to have a bounce-back game on Saturday.

This game has shootout potential written all over it and I’m going to buy into the hype. I think both teams will be able to move the ball without much resistance. What’s concerning from Colorado’s perspective is that games like that typically come down to not turning the ball over and keeping penalties to a minimum, something they’ve really struggled with the past two games. The Buffaloes should be able to keep the game competitive but I think the Cougars will execute better down the stretch and win the game.