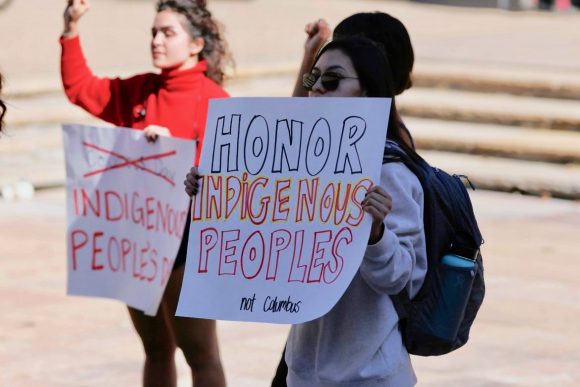 Members of the Oyate Native American Student Organization staged a ‘die-in’ at the University Memorial Center fountains Monday to protest Columbus Day and advocate instead for Indigenous People’s Day. Prevalent during the Vietnam War and environmental marches of the 1960s, a ‘die-in’ is a popular form of protest where people simulate being dead. On Monday, students aimed to draw awareness to the suffering of indigenous people throughout history.

“It’s honoring the billions of indigenous people since we survived 500-plus years of genocide and trauma,” said Saydie Sago, a student and member of the organization. “I think it’s really important to change Columbus Day to Indigenous People’s Day to honor everybody that’s been through so many traumas.”

The march to the UMC began outside Cheyenne Arapaho Hall. Joe CrowShoe, a student who is a member of the Blackfeet Tribe, reminded surrounding students that Christopher Columbus first landed in The Bahamas, not in the Americas.

“There’s things that get lost in translation,” CrowShoe said.  “We started celebrating somebody who was really a model of the manifest destiny conquest genocide, and it’s not fair to the shared story of America. I think there are more productive and healthy ways to celebrate telling America that don’t step on indigenous peoples.”

Clutching their posters, marchers took off around Farrand Field before halting outside the UMC.

Brightly-colored signs that read “We are on stolen land” surrounded the sidewalks. While marching, the crowd’s synchronized voices echoed, “Whose land? Cheyenne. Whose land? Arapahoe. Whose land? Ute.”

“We started celebrating somebody who was really a model of the manifest destiny conquest genocide, and it’s not fair to the shared story of America.”

Standing by the UMC fountains, Sago said, “(Columbus) did not discover anything.”

At this word, everyone participating in the die-in rose with one fist in the air as onlookers cheered along, including INVST Community Studies member Mohammed Morris. 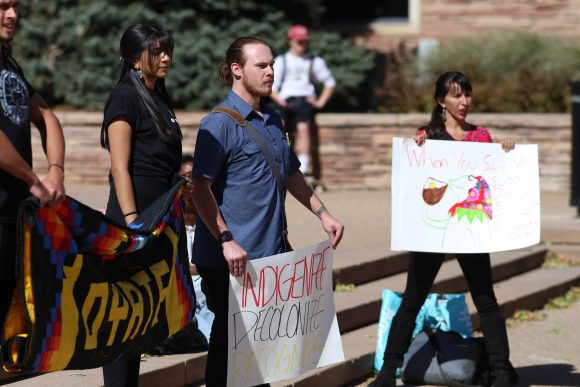 “We personally appreciate it and I think the majority of people watching appreciate it and we’re definitely in support (of) the protest,” Morris said. INVST Community Studies offers leadership training for students who are passionate about social and environmental justice.

“For me it’s really frustrating,” Flores said. “It’s a painful memory of a legacy of their mistake that was ground zero for colonization. All of Boulder, of Colorado, is on stolen land – stolen Cheyenne, Arapahoe, Ute land. I think that’s the key thing. Know whose land you’re on. Educate yourself. If you really want to support indigenous people, you need to educate yourself.”