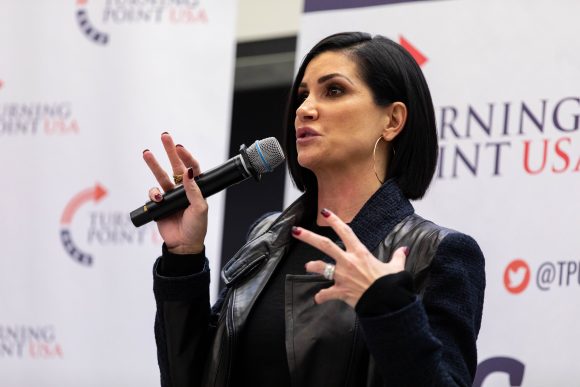 Loesch opened the speech with a story that stoked her passion for the Second Amendment. When she was 12 years old, her aunt returned home having been badly beaten by her estranged husband. Fearing that he might come for the family, Loesch’s grandfather sat on the porch with his rifle all night. Loesch said the sight of her grandfather with his rifle saved her aunt’s life.

“I never want anyone to feel the fear that I felt that night,” Loesch said.

Loesch frequently appears as a commentator on CNN and Fox News and has written for publications including Breitbart News. Her involvement with Breitbart and the NRA, including being the face of a 2017 NRA ad critiqued for communicating a call-to-arms to gun owners, has made Loesch a contentious figure. Loesch’s invitation to speak by conservative student group Turning Point USA brought controversy, similar to when far-right political commentator Milo Yiannopoulos came to campus in 2017. 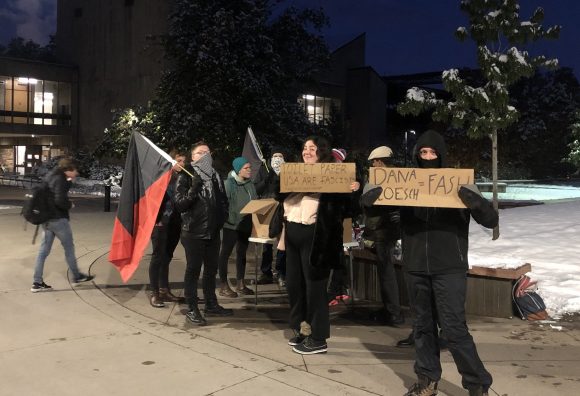 During the speech, a small crowd of students braved the cold in protest of the NRA and Loesch.

“We’re not here to take people’s guns away,” said protestor Kyle Wager, a CU senior and outreach coordinator for CU Young Democratic Socialists of America. “We are here because of (Loesch’s) long history of insensitive comments … about mass shooting incidents and who was also a former spokesperson for the NRA whose been a right-wing source of lobbying money and influence on the government.”

Loesch, born Dana Eaton, grew up in a liberal household in Missouri. After dropping out of college, she worked as a journalist for the Saint Louis Times and Riverfront Magazine before becoming the host of her own radio show in 2008. By this time, Loesch’s political views had shifted from liberal to ultra-conservative. She accredits her disillusionment with liberalism to the Clinton-Lewinsky scandal and Sept. 11. Her radio program, The Dana Show, helped launch her career in media. In 2011, she was hired by CNN as a political analyst for the 2012 election.

Loesch’s speech weaved between sentimental stories, fast facts regarding firearm statistics and rhetoric and the threats the Second Amendment faces today. Though, the majority of the talk was dedicated to dissecting particular phrases and excerpts from the Boulder County assault weapons ban.

“I assumed because of this ordinance that everybody has had a massive problem with crime and illegal possession of semi-automatic rifles and stuff,” Loesch said. “And I looked and I looked and I looked. The crazy thing is, I could not find that data that would support such a regulation. And that was interesting to me because it almost seemed like it was a response to a problem that isn’t an epidemic as it is being presented in the press.” 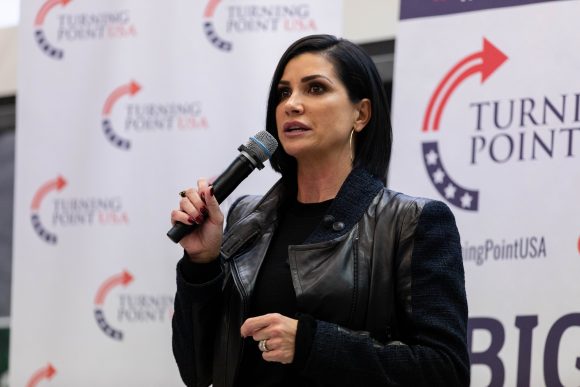 So far, there have been an estimated 328 mass shootings in the United States in 2019. When asked if it should be harder to obtain semi-automatic weapons and modifications to make weapons fully automatic, Loesch digressed to flaws in state systems that do not report convictions to the National Crime Information Center (NCIC). Both the Parkland shooter and the Sutherland Springs shooter obtained their firearms because they passed their background checks. However, both men had significant records that had been recorded on a state-level but had failed to be reported to the National Instant Criminal Background Check System (NICS).

This was Loesch’s chief argument when defending the ability to purchase firearms of any caliber. However, many gun control advocates argue that the background check itself should be more vigilant and include local, state and national criminal records. Some states conduct their own background checks that are much more thorough than states that rely on the NICS record alone. The only way NICS receives records of state-level convictions is by voluntary submissions. This has proven to be a flawed system due to the variation in integrity and willingness to nationally report crime from state to state.

“I have a CP33, 22 LR that shifts with two standard capacity 33-round magazines,” Loesch said. “And why do I have two 33-round magazines you may ask? Because I paid for it, I ordered it, I wanted to, it’s mine.” This statement was met with applause and laughter from the audience.

Celebrating this kind of it’s-none-of-your-business rationale was a theme throughout the conversation.