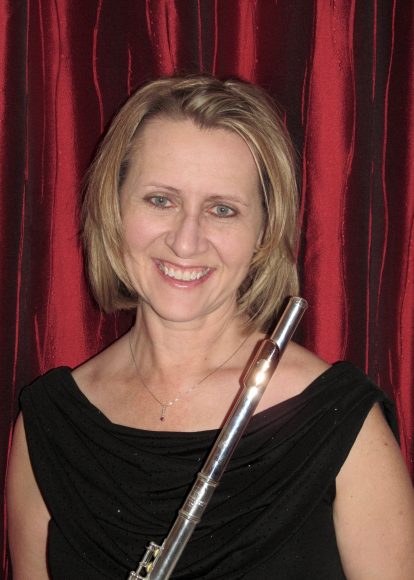 Principal flutist Elizabeth Sadilek-Labenski will explore lyricism and conflicting emotions in Jon Lord’s “To Notice Such Things.” This will be the second piece in the Boulder Philharmonic’s upcoming concert “Gritty/Pretty” held in Macky Auditorium Saturday.

The show’s title, “Gritty / Pretty,” is a testament to the program’s contrasting repertoire. The first half will feature classical compositions by Radiohead’s guitarist Johnny Greenwood and Deep Purple’s keyboardist Jon Lord, while the second half consists of the Franz Schubert’s dramatic “Symphony No. 5 in B flat.”

A freelance musician, Sadilek-Labenski plays with three orchestras: the Boulder Philharmonic, Colorado Ballet and Opera Colorado. Off the stage, she teaches private flute lessons in Edwards, Colorado. Her career gives her the flexibility to take care of her three sons and keep her life focused on “part-time music and full-time family.”

During her 16 years with the Boulder Philharmonic, Sadilek-Labenski has enjoyed working with conductor Michael Butterman, who she describes as a “wonderful musician and conductor and a kind person.” She said the orchestra has a feeling of “camaraderie” among the players.

“The relationship between the players is unique,” Sadilek-Labenski said. “We all know each other and adore playing together. The wind’s section is also very close. When you’re close like that in a friendly way, it makes the music so much more magical.”

The upcoming performance’s first half will feature Greenwood and Lord’s virtuosity in the classical style, a far cry from their rock music. Both have enjoyed success in the classical world. Greenwood held a position as a composer-in-residence for the BBC Concert Orchestra in 2004, and Lord’s album “To Notice Such Things” reached No. 4 on the UK’s classical music charts.

“The relationship between the players is unique. When you’re close like that in a friendly way, it makes the music so much more magical.”

“I absolutely adore this piece – it’s gorgeous,” Sadilek-Labenski said. “It has beautiful lyrical sections. It is very emotional, showing frustration and anger, and having to deal with death. Yet, (Lord) reflects on all the beautiful things in his life. There is that gritty part, as well as the pretty part.”

Sadilek-Labenski seems excited to be soloing, a rare opportunity for her.  In “To Notice Such Things,” she said Lord “expands what the instrument can do” and is “always experimenting and going beyond the normal,” which makes the solos interesting.

“I am grateful to Michael for letting me play this piece,” Sadilek-Labenski said. “A lot of times, we bring in solo artists. For him to allow me, as an orchestra member, to play a solo has been really special. This is a real treat for me.”

Tickets and more information for “Gritty/Pretty” can be found here.