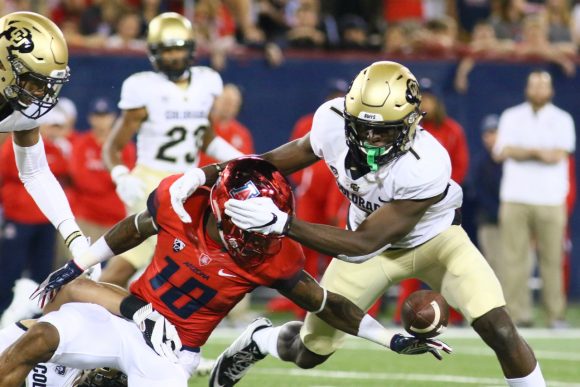 Did you miss us? After a much-needed bye week, the 3-1 Colorado Buffaloes football team returns to the gridiron against the 3-1 Arizona Wildcats on Saturday at 2:30 p.m. MST. Whoever leaves Folsom Field victorious will have possession of first place in the Pac-12 South. This week, the CU Independent teamed up with the Daily Wildcat for a special edition of Staff Picks.

The Buffs and Wildcats enter week six riding high. CU is coming off an upset victory over Arizona State, but had some time on their hands with a bye week. Meanwhile, Arizona has won three in a row, including wins over UCLA and Texas Tech. As per usual, the Buffaloes expect to engage in a high-scoring affair. Last week, Colorado seemed to hit their offensive stride with a more up-tempo offense. It wasn’t quite a two-minute offensive scheme, but an increased pace helped them put up 34 points against a stout Arizona State defense.

Unfortunately for both teams, injuries to key players will play a factor on Saturday. Junior wide receiver Laviska Shenault Jr. and junior defensive lineman Mustafa Johnson are considered game time decisions for the Buffs. I’m optimistic they’ll see the field, but if not, CU will be without two key players. The Wildcats are also considering star quarterback Khalil Tate a game time decision, which would be a devastating blow for their offense.

Regardless of the injuries, it will be a competitive game for the top spot in the Pac-12 South. CU will continue to find offensive consistency and edge the Wildcats in front of a raucous Folsom crowd.

In last year’s contest between Arizona and CU, Wildcat quarterback Khalil Tate threw for a career-high 350 passing yards alongside 5 touchdowns. This year, Tate is questionable to even play after missing last week’s game against UCLA with a hamstring injury. That questionable status is a theme of this game, though, as Tate and running back J.J. Taylor are questionable to play for Arizona. On the opposite sideline, the Buffs face injuries to star wide receiver Leviska Shenault and defensive lineman Mustafa Johnson. However, even after Shenault and Johnson left in the first quarter, the Buffs came away with a win against Arizona State two weeks ago.

Fresh off a bye week, I expect great things from these Buffs. With two wins over ranked opponents, it’s clear CU can win when it matters; but a disappointing loss against Air Force also shows this unit’s unstable nature. That being said, with the home-field advantage after a bye week, Colorado should eliminate some of the simple errors they’ve been plagued by so far in the season. However, even if Tate won’t play for Arizona, backup quarterback Grant Gunnell is no slouch either. Gunnell threw for 352 yards and one touchdown against UCLA last week. He’ll challenge this CU defense as much as they’ll challenge him. I predict Colorado to play a strong game, but by no means will it be easy.

Since both teams have the opportunity in this game to cement themselves as strong Pac-12 contenders, I predict this game will be tight throughout and will be decided in the fourth quarter. Of course, the questionable status of Laviska Shenault Jr., Mustafa Johnson and Khalil Tate overshadow this game, but these players possibly not playing shouldn’t take away too much excitement from what this game could be. Both teams have a handful of explosive players that are ready to step up and make a name for themselves.

One player for CU that has already made a huge impact only four games into the season is wide receiver Tony Brown. Through these first four games, Brown has 19 receptions for 301 yards and four touchdowns. Two weeks ago against ASU, Brown showed college football what he could really do with 9 receptions for 150 yards and three touchdowns, helping the Buffs secure their first-ever victory in Tempe and giving the Buffs their first road win versus a ranked opponent since 2002.

Another big question mark for CU is quarterback Steven Montez. While Montez is healthy, it’s a matter of how well he will play. In the first four games of the season, Montez’s passing percentage has dipped below 65 percent only in one game, against Air Force, which is the Buffalo’s only loss this season. In the game against ASU a few weeks ago, Montez’s passing percentage was 76.7 percent. In that game, Montez completed 23 of 30 passes for 337 yards, three touchdowns and no interceptions. If Montez can perform at an elite level, he is one of the best in the business and should be able to pick up a win for the Buffaloes.

I know it’s still early in the season, but who would have guessed Arizona and Colorado to be at the top of the Pac-12 South standings at any point during the year? Arizona is coming off a nail-biting win against UCLA and Colorado went into Tempe and pulled off an impressive upset win against ASU. Both of these teams should realistically be undefeated if it wasn’t for Khalil Tate coming up one yard short at Hawaii and Colorado falling in overtime to Air Force.

As for the game this weekend though, I’m not sure what to expect. We still don’t know the status of Arizona’s top two offensive players and we also don’t know the status of Laviska Shenault Jr. and Mustafa Johnson for Colorado. Shenault is one of the best all around players in the entire conference when it comes to offense and he didn’t play last year when Arizona beat Colorado in Tucson.

The last two Arizona games I predicted as high scoring, with both teams getting over 40 points, and in both of those games neither team scored even close to 40. I would expect this matchup to be a high-powered offensive game, especially for Arizona. But that will all come down to if Khalil Tate and JJ Taylor play. Both missed last week’s game against UCLA with injuries. Tate had a hamstring and ankle injury which is very reminiscent of last year when he missed time due to an ankle injury. Kevin Sumlin didn’t seem too worried about Tate or Taylor during his weekly press conference but still doesn’t know the status of the two.

If Grant Gunnell makes his second career start this weekend, expect some mistakes. The true freshman has never played on the road before and Colorado is averaging the highest percent of attendance in the Pac-12. To make matters worse for Gunnell and Arizona, the Wildcats are 1-5 all time under Sumlin on the road.

The Wildcats are currently on a home game hot-streak, as they have won their past three games, all of which were at home. This week, the team hits the road and faces the Buffaloes. Key phrase there is “hits the road.” It’s no secret that Arizona football plays different on the road. We’ve seen it this year when the Wildcats took on the Hawaii Rainbow Warriors. Granted, traveling to Hawaii is a little different than to Colorado, but the road is the road.

“Based on our past, we don’t really play to our full potential on the road,” said junior linebacker Colin Schooler.

I will be surprised if Arizona can pull off its fourth win of the season this Saturday against Colorado. The Buffaloes are coming off a huge 34-31 victory against Arizona State on the road in Tempe, Ariz. Colorado is 3-1 on the season, with the team’s only loss coming against Air Force in mid-September in overtime, 23-30.

Saturday’s game against the Buffaloes should be interesting as Arizona finally hits the road again after being at home for three games and having one bye week after defeating Texas Tech. I’m taking Colorado as the victors for Arizona’s fifth game of the 2019 season.

The Wildcats come into this week’s contest against Colorado on a two-game win streak, previously beating UCLA 20-17 last week. Arizona, who was without starting quarterback Khalil Tate and starting running back J.J. Taylor against UCLA, did well with true freshman quarterback Grant Gunnell in his first start of his Arizona career. The question of whether Tate or Taylor are good to go for this week is still up in the air, however.

Arizona will be playing on the road for the first time since their Week 0 loss to Hawai’i. The last time Arizona played Colorado in Boulder, Tate was unbelievable going an astounding 12 of 13 with 154 yards passing and one touchdown, as well as 14 carries for 327 yards and four touchdowns. The Wildcats’ offense is a lot different than the last time they were in Boulder, but if Arizona is able to get Taylor and Tate back, the Wildcats will be able to put up points on the Buffaloes, who allowed 31 points to ASU last week in a 34-31 win in Tempe.

Colorado is led by senior quarterback Steven Montez, who has been very solid for the Buffaloes thus far in the season. The Buffaloes also have one of the most talented receivers in the Pac-12 in Laviska Shenault Jr., who didn’t play in last years game against the Wildcats.

I believe that if the Wildcats are able to run the ball as well as they did the last time in Boulder with Tate and Taylor back, as well as another solid defensive game from Defensive Coordinator Marcel Yates and this Arizona defense, this game should keep Arizona at the top of the Pac-12 South.