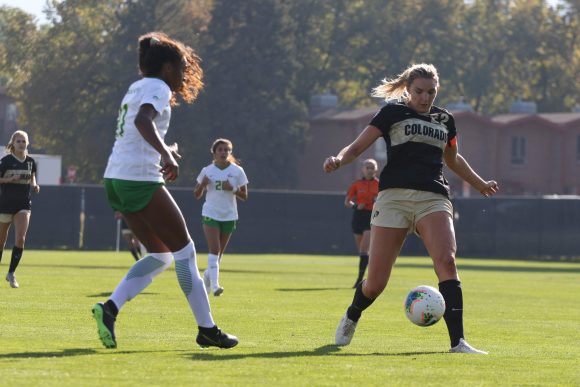 The University of Colorado women’s soccer team tied the University of Oregon Ducks 2-2 Thursday afternoon in a double overtime thriller. CU came off a 2-1 win for their first conference game of the season in another double overtime game against Arizona last week. Colorado returned to Prentup Field to host the Ducks, who were reeling from a 2-1 loss against Washington last Friday.

Colorado got off to a strong start two minutes in. Junior midfielder Taylor Kornieck found the left corner of the net with her left foot, assisted by freshman forward Tessa Barton. Kornieck has started the season off explosive with nine goals on the season so far. Her ninth gave her the school record for career points, with 36 goals and 23 assists in her career at CU.

“It means a lot to me,” Kornieck said. “I didn’t really look at the numbers until my senior year, I didn’t realize how close I was to it.”

Head coach Danny Sanchez was excited for Kornieck and her feat.

“It’s a tremendous accomplishment, especially for a center midfielder,” Sanchez said “She has to earn every goal she gets, so we’re proud of her, and it’s not unexpected.” 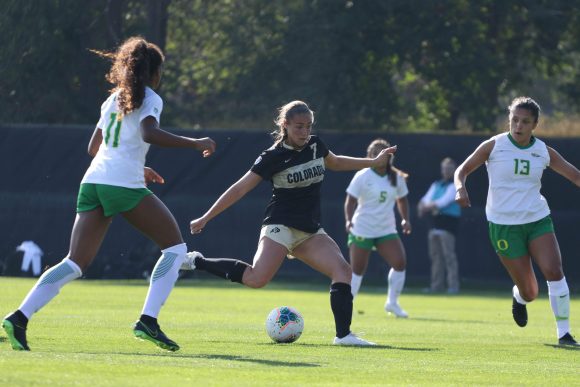 Oregon seemed to flip the script to start the second half, pushing the ball into Buff territory often in the first seven minutes. However, the Buffs quickly retaliated with a goal from sophomore forward Libby Geraghty, who tapped it into the net after evading Oregon’s goalkeeper on the ground. Libby also found two shots on goal in the first half and would end the game with five shots in total.

The Ducks didn’t relent though, fighting for possession much better in the second half, and eventually finding the back of the net. Oregon junior midfielder Chardonnay Curran scored unassisted at the 72-minute mark.

A corner-kick 5 minutes into overtime gave CU a strong opportunity to break the tie, but the kick sailed out of bounds over the goal. Similarly, a shot from Oregon only a minute later could’ve been the tiebreaker, but it flew out of bounds.

The first overtime period was back and forth. CU found four shots and the Ducks three, ultimately ending in a scoreless period. 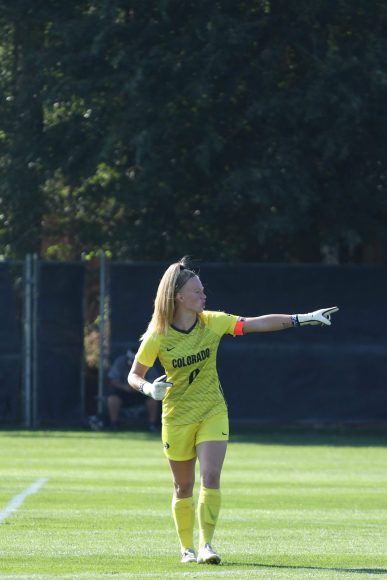 Senior goalkeeper Jalen Tompkins directs a play at the beginning of the game at Prentup Field on Oct. 3, 2019. (Kara Wagenknecht/CU Independent)

To start the second OT, Oregon found a shot on goal within a minute, but Buffs senior goalkeeper Jalen Tompkins reeled it in. After 5 minutes of back and forth, the Buffs took an opportunity for a corner, but couldn’t make it work. A foul kick immediately after again sent the ball toward Oregon’s goal, but almost immediately a Buff header sent the ball over the goal.

Though the Buffs firmly controlled the first half and scored early in the second, Oregon’s only two shots on goal tied it up, and neither team could find the tiebreaker in tight overtime possessions.

“Sometimes (when) you score early you tend to relax,” Sanchez said. “But I thought that we played well after that, really with the exception of the last 20 minutes. At the end of the day, we need to take care of the chances we have, and we didn’t.”

The tie marks the second consecutive game for the Buffs to reach double overtime. Kornieck’s been pleased with the offensive output, but says adjustments need to be made on defense

“We do a really good job scoring goals lately,” Kornieck said. “Once we have that part we just need to do a lot better job working hard and dropping back and having numbers behind the ball.”

Colorado plays the Oregon State Beavers at Prentup Field this Sunday, kicking off at 2 p.m. MST.