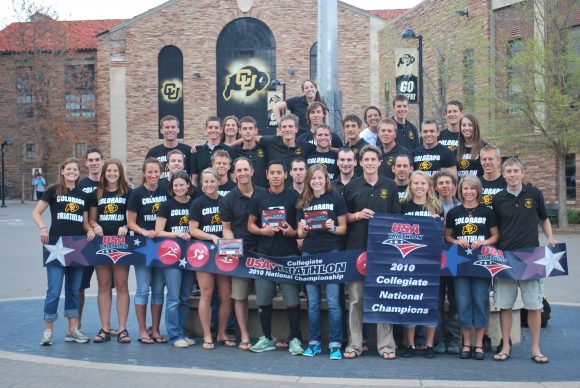 The University of Colorado Boulder’s triathlon club offers students quite the opportunity to challenge their athletic abilities. Led by President McKinley Coppock and Head Coach Brad Seng, these Buffs must master the disciplines of running, biking and swimming to claim a national championship.

Although the team has won an impressive 18 national championships, it’s never an easy path to the top. They finished third nationally last year and hopes to get over the hump to the top in 2019. As team president, Coppock has separate aspirations in addition to winning.

“We had an eight-year winning streak at nationals and the past two years we’ve gotten second and third (place),” said Coppock, a junior at CU. “I suppose getting back on top is more of a team goal. I’m personally less invested in the team placement and more in just making sure everyone feels welcome and has a place.”

Creating a positive team culture is a high priority for Seng and Coppock, and one they hope will keep students around for the long run. Competing in a triathlon is certainly not for everybody, and there’s a wide range of talent on the team.

“It’s definitely a daunting sport so at least when we recruit members, I try to make it the least intimidating it can be,” Coppock said. “(I try) just being really friendly. Like, you don’t need a bike to be on the team, just making people aware that you don’t ever have to have done one before, because I’d never done a triathlon before I joined.”

Coppock, who was in charge of fundraising last year, is in her first year as triathlon club president. Her duties include overseeing the eight person student board and making sure all races go smoothly. Seng is certainly grateful for her presence and hard work.

“I’m really excited to have McKinley (Coppock) leading the charge,” Seng said. “She brings a real good personality to that position in a leadership role… I think with some new ideas and a new perspective she’s going to be very effective in that role for us, which is again critical for us going back to our team’s success, it’s really student driven.”

From a head coach’s perspective, Seng attempts to instill a team-first attitude. This has attracted nearly 100 students to join the club and compete at a high level.

“We’re really looking to create an environment that’s going to make everyone feel like they’re able to contribute,” said Seng, who’s in his seventh season working with the team. “We have a wide range of experience and ability on the team; from those learning how to swim, doing their first triathlons, to those competing at an elite level internationally and even nationally. So it’s a pretty broad spectrum.”

Another vital part of the program is vice president Devon Kroeker. She does everything from setting up team events to working with Coppock to ensure the team is well taken care of on the road. Kroeker’s high praise of the team was right on cue with her counterparts.

“I personally just really enjoy our team atmosphere,” said Kroeker, a junior. “It’s a really good group of people, all super encouraging, and I think that’s a big part of it. We have people come who’ve never swam before in their life, who don’t own a bike and everything, we just kind of support each other and help push each other to be the best we can.”

Also in support are the many CU triathlon club alumni. Kroeker says their alumni constantly reach out to donate old equipment or help in any fashion. The roots are deep in this program and is a large reason for its sustained success.

In an average week, the team runs three team practices and eight optional workouts. Along with practice, their schedule consists of five races in Colorado, Arizona, and Nevada. While the sport is demanding, Kroeker says that coach Seng wants the team to be “students first and athletes second.” Seng covets his athletes to achieve in all facets of life, even after they graduate.

“My biggest goal is to instill and cultivate an environment that’s going to allow for personal and athletic and even some professional growth,” Seng said. “As our student athletes go through their college years as freshman up to seniors there’s a lot of opportunity for growth.”

As for the future of the triathlon program, Coppock wants to see growth. The more people who know about the program the better.

“I would just love to see it get bigger,” Coppock said. “We’ve always struggled recruiting, we don’t have a huge outreach I’d say. I’d love to see more reach across campus and really get our name out there because we’re a great program and ranked very well nationally, and it would be awesome to reach more people.”

Seng believes a large key to success is letting the student athletes enjoy the club. At the end of the day, triathlon is a club sport and having a good time is always encouraged.

“Ultimately, we want to have fun along the way,” Seng said. “If we’re not having fun with the amount of time, energy and resources these team members are putting into their craft, if they’re not having fun then we really have to reassess what our model is.”

The CU triathlon will head to Boulder City, Nevada for the Pumpkinman Triathlon on Oct. 6.